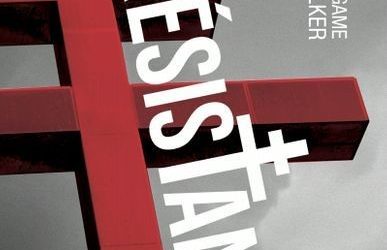 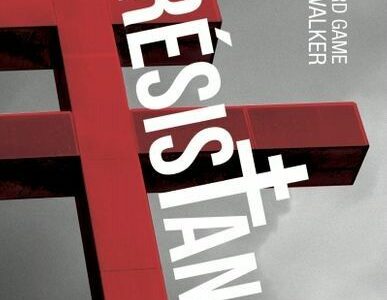 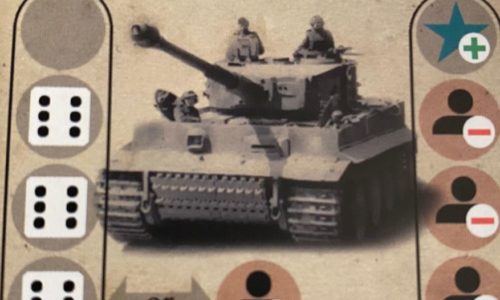 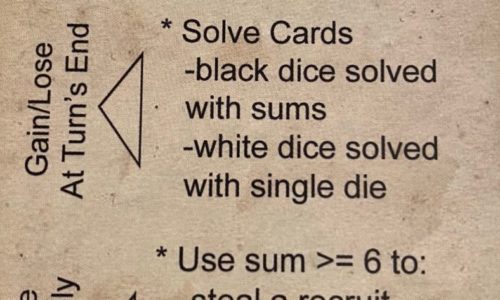 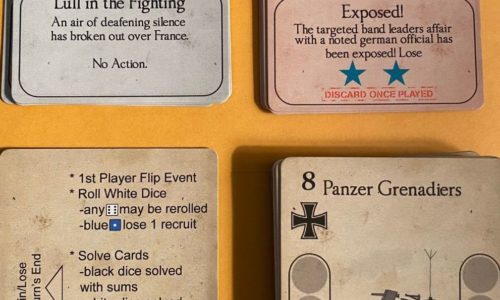 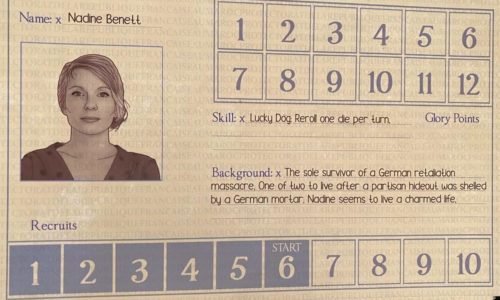 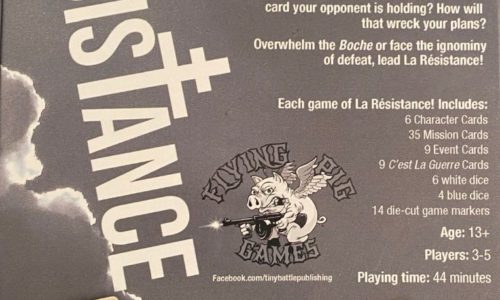 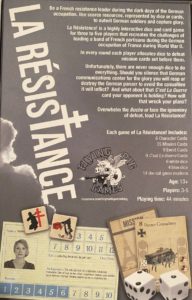 When I first opened La Resistance and looked at the rules, I thought would be a fine game to bring out when my friends and I have an hour or so left after a day of gaming and want something that would be fun and quick.

It does play fast. You roll a lot of dice, and each round takes about five minutes per player. The box says playing time is 44 minutes, which sounded a bit odd to me. But, Mark Walker founded Flying Pig, so I guess he has the right to say it about his own game.

Still, I think he missed the motto for La Resistance. I would have said, “roll well, choose better.” It’s a game that lets you take charge – or at least seem to – with every roll.

Each player starts by rolling six D-6 dice. For every 6 you roll, you have the option of rolling one additional die as a bonus. You can use the extra number, but roll a 1 with it and you lose one of your little partisan band. Lose them all and you’re out of the game. 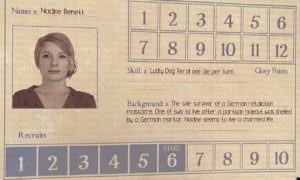 Every player also starts with a character card. The artwork is good, and the backgrounds are kind of cute. The bonus on each card is different and can be really important. One of them even lets a player steal a victory point (they are called glory points in the game) from someone else. If they can afford it. More about that later.

So, what’s the choice? 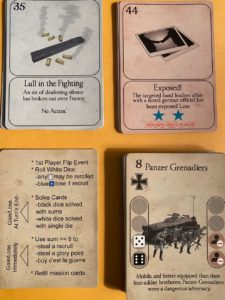 There is a deck of event cards, mostly nasty, that the first player turns over each round. It affects every player. And, you can often deal with it. If you choose to pay a die.

Then three mission cards are turned over. Most show white dice, which you can cover with one of the dice you rolled, but the number has to be the face value shown or higher. The card also shows black dice, and you can cover them with any number of dice to reach that total.

Example – A three and two ones cover a single black 5.

Now, here’s the choice. Every one of those numbers is next to a symbol.

Same thing with partisans. You can increase your band by covering up partisans on the card with a plus symbol or lose them by not covering up those partisans with a minus symbol.

Now, most mission cards have three dice to cover. Easy ones have just two, hard ones have four. What if it requires a six, and you didn’t roll one? Never fear, just take away one die and roll again. Maybe you will be lucky.

You can see why rolling a six is a good idea. That extra die will really help. Just don’t roll a one and lose a partisan. After all, if you lose your whole band, you are out of the game.

Or, do you want to spend a total of 6 on your dice to steal another player’s partisan, or to steal a glory point, or to take a C’est La Guerre card. But, those die points can not have been used for anything else, and you only have six dice to cover all those spots on the three cards.

There is, of course, more stuff in this little box – the character cards you pick to start the game. 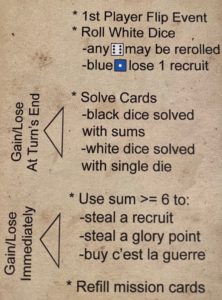 One lets you get two glory points by giving one of your partisans to another player, another lets you re-roll a single die each turn. One lets you save a partisan by paying one glory point.

There are seven to look at. Another gives you a white 5 die face to use against buildings, but not soldiers. One lets you steal a partisan from another player, but you have to pay for it. The other two are fun, too.

Just remember, when you are picking your character, you have to choose well.

Now, there are some rough edges. The rules book could be written a little better and indexed for key points. Some of the rules just repeat what is on the cards, which wastes space. But, on the whole, they are clear and easy to follow.

So, try it a few times. See how it will fit into your gaming schedule.

That would be choosing wisely.