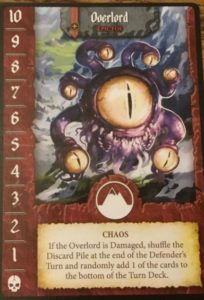 The obvious question that first pops into your mind when you pick up this not-quite 5 by 7-inch box is “Just how epic can it be?”

In other words, can you really put a big game in a little box?

Then you open it and you see these tiny markers that, if it weren’t for their various colors, could be mistaken for really small gingerbread men.

But, forget those questions. The real one you should ask is “Can the designer really expect hard-core gamers to actually co-operate with each other?”

The answers, to all those things, are yes, yes, yes.

You don’t get a board. You get seven cards that represent a central city and six regions. They are two-sided, with different powers depending on which side you choose to put down. Some are really helpful, at least until the region is destroyed in attacks by the evil enemy.

You get your heroes – four markers, one for each player or two in a solitaire game. You get some tiny, odd-shaped markers to fit into the tiny holes in your hero figure, each with its own special power. 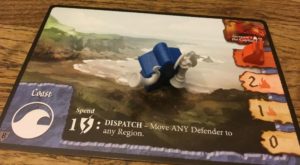 And you get enemies that come to attack. Every turn. They are out to destroy the land and you can only stop them if you are in the region where they strike. Hmmmm, four figures and seven regions. And limited energy to move and fight.

Which means there is a whole lot of variety in this little box.

Now your enemies show up at random. The only thing you can count on is they get worse and worse as the game goes on. Then comes the Epic Foe, who is bigger and meaner than any of the hero characters. What else would you expect?

Now each hero only has four hit points on their card. And they have limited energy to accomplish their tasks – just two, really. Keep your regions from being destroyed and slay the really nasty monster.

How you do it is epic. Now heroes don’t actually die, but if they run out of hit points they can’t attack or defend, just head back to the Capitol, where all their hit points are restored.

But, until they get there, you have one less hero to fight the attacks on those six regions, and once they are gone, they are gone forever.

Or, if they attack a destroyed region that is undefended, you lose a step in your Capital City. 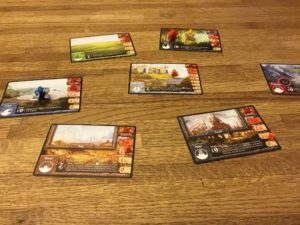 The rules are really simple if you follow them one step at a time. Everyone wins, or everyone loses. You have to have a hero in a region to stop an attack on it, and it may cost you a hit point. And, the attacks keep coming every turn.

Where to go? What artifacts to hold? Should I give up one of my valuable hit points to help another member of my team?

Answer those questions long enough and you start to create your own epic story. Which is the point. This isn’t a long game, but it does keep you busy. The box tells you it offers high strategy, low downtime and short playtime. This means everything happens quickly, once you get the hang of what all those symbols mean.

As for whether I would volunteer to give up one of my lives to give two energy to another player…well, that’s a question I don’t think I will answer right now.

After all, a tiny game deserves a tiny review.