This is actually an expansion of a game that first came out in 2003. It’s by the same designers and has all the virtues and all the vices of expansions. The game is bigger and more complicated, and the actions are a little more complex. And you have to keep looking up rules as you play, sometimes to your great advantage.

Other times you will get sunk.

When the game first came out, it was just Brawling Battleships. This new version is by the same publisher, and the same designers get credit. Taylor, who created Wooden Ships and Iron Men, passed away in 2012.

Amazingly, nothing seems to have changed, at least at first. The game is made up of two decks of cards, one showing World War I ships and the other, an action deck, lets you use them.

Every player starts out with six ships, drawn randomly. They also have a hand with six action cards, and keep drawing new ones to replace the ones that are used.

Now I don’t remember all the dreadnoughts in the original game, but the 64 ships in Steel look about the same – nice images of the World War I ships, easy-to-read graphics on top showing the guns on each vessel and a list of hit boxes on the bottom. Think of them as watertight compartments. Lose them all and you are sunk.

Which is the first sneaky thing about the rules. If you play a three-handed game, or as teams, whoever takes the last shot and sinks a dreadnought gets all the credit. They take the ship card, turn it over, and the little number on the front shows how many points it’s worth to them.

The rules call for three rounds of play, but sink all your opponent’s dreadnoughts and you automatically win the game. Instant victory. 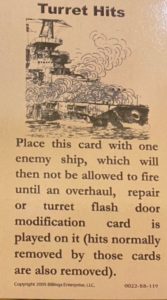 The biggest change in the new version is those action cards. You get all 64 from the original set, another 64 in the expansion, and a bonus of 16 special cards -144 in all.

As you play all those cards, some interesting things will happen.You can lay smoke, which protects a fleet from enemy fire for a turn. You can decide to use special tactics like an offensive sweep, or put out aircraft to add an extra flotation box hit to a successful attack. A poor commander card reduces flotation hits from your enemy by one.

Those cards are also the reason you have to keep going back to the rule book. So many cards, so many ways to use them. So many different things to deal with.A few cards have no open fire option. A few others let you do two things.

The variety seems endless. You can draw a spy and steal two cards from another player. You might have a bridge on fire, which cuts down on your ability to shoot, or play a storm card and put the fire out.You can hit an enemy’s turret, which will keep them from using one of their guns unless they draw a repair card. You can even get reinforcements. Then there are those subtle qualifications that tell you not every card can be used all the time. Ah, the realities of war at sea. 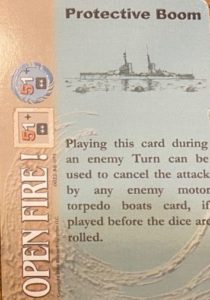 Of course, there are defense cards too. You’re being shot at, and you play your dud card. Someone is close to scoring and you draw a mutiny card – play it and the badly hit ship is taken off the board. No victory points for anyone.

Almost all the cards are double use, which means you can use the text part or you can use the open fire markers on the side. There are three shapes of guns – not every ship has every kind – and you can only fire a gun that matches the symbol on the card. If you have two symbols on the card that matches, you need two ships to fire both of them.

You also have to look carefully at the card you play. If it has the right symbol, you might score a critical hit when you shoot.

For all of its complexities, the game plays quickly. The rolls are easy to follow, although the game uses two colors of six-sided dice. You read a red 3 and a white 2 as thirty-two, not five. When you shoot, you need to roll the number shown or higher to score a hit.

At the end of the thin rules booklet, there are some optional rules that sound like fun. You can put out a screen to protect damaged ships, or – if a dreadnought is sunk, a roll of 11 – 16 will save it. 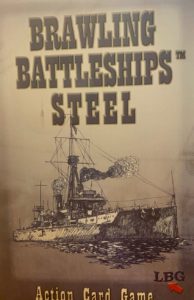 The interesting thing about drawing so many cards is that you never play the same game twice. It’s a nice reminder of a game that I played with a batch of different guys a long time ago.

I discovered with this expanded version of Brawling Battleships Steel that the game I enjoyed about World War I naval combat has not really changed, even if it has gotten a little more unpredictable.