The games I play regularly are very different, at least at first glance. 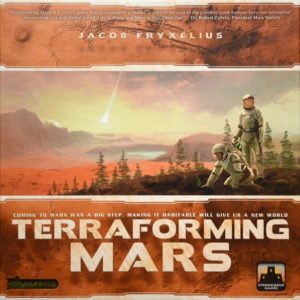 Terraforming Mars produces interactions and conflicts among its various players mainly through the use of some of its cards and the control of valuable spaces. As there are only a limited number of high-value locations on Mars whoever gets to them first has a long-term advantage. In addition, a few cards allow a player to steal resources being stored on other player’s cards. – Fred

Some are rooted firmly in history, some are pure fantasy. Some are simply card-building games, others require a board or a map. Still, others lay vast piles of resources on the table that every player has to acquire.

And yet, in one important way, they are all the same. The best ones give you almost everything you need to win, but never let you get it all.

Play Auztralia and you can get the resources you need to build railroads vital to get into the heart of the country, or you can build farms and get the money you need to build an army. But, you don’t have the time needed to do both.

Play Fortress America and you have a vast invading army, but you can’t put all the troops where you need them. Play Brass and you have lots of cities in which to build factories, but you may not have them in the right places, and you will have to build canals to ship your goods.

Heck, play Quartermaster General – one of my favorite card games – and you have all the military and historic factors you need to win, but the deck probably won’t give you what you really need when you really need it. 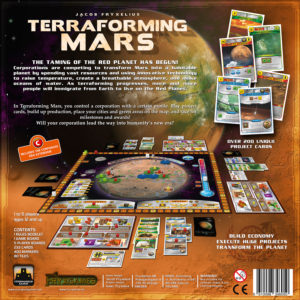 Terraforming Mars has the same feel as those other games. Throw in 7 Wonders too. That one has a lot of pathways to win, but until you start scoring, you normally don’t know who is really ahead.

First the high praise. Terraforming Mars is worth playing over and over again. Take my word for it, you can never play the same game twice. Everything changes every time. And, it is wildly popular.

Look it up on the web. It has won several international awards and been translated into more than 20 languages. Well, it started in Sweden, so you could expect at least a couple of translations. But five expansions and follow-ups?

Let’s lay it out. Mars has to be made more hospitable to humans, so players compete to raise the temperature and increase the oxygen level. There is a thick deck of cards – you get four each turn – that helps do it if you can afford to buy them.

Starting cards give every player roughly similar abilities, but each is a little different. Some have special abilities, others start with more money. Some get production discounts. 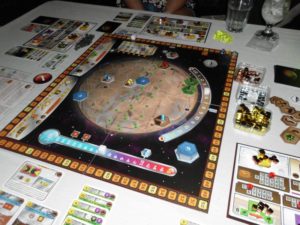 The 6th turn (called generations) in the game. Terraforming Mars ends when players have maxed out the temperature, oxygen level, and ocean area on Mars. They score victory points for creating forests and cities among other things. There are also awards for various aspects of terraforming Mars and VPs are may be generated by some of the cards a player controls. These cards are bought with Mars Euros, which each player receives depending on the size of the player’s economy and on how successful he was in terraforming. – From BGG with permission. – Fred

Every player gets to produce things. Plants, iron, titanium, energy, heat. Produce enough plants and you put down a green tile, which gives one victory point to any city it touches. And raises the oxygen level. Then the creep across from you builds his city next to your forest, and he gets a victory point. But, you already increased your income by putting the green tile down in the first place, and can put your own city next to it as well.

Ah, but I have a card with a cute little puppy on it. That lets me gain victory points any time anybody builds a city.

You can see where things start getting dicey. Now, add the fact that the iron you mine and the titanium you produce can help pay for some other cards. Some of that income will helps pay for other cards that you use to place ocean tiles. Or forests. Well, you get the idea.

Did I mention that some of the cards also give you victory points? You can see how it is difficult to figure out who is winning until the game is over.

Terraforming Mars is a well thought out game, and it started as a family project. You can look that up too.

Lennart and Ingrid Fryxelius had 16 children, and he encouraged them to create their own board games. In 2011, five of the 10 boys formed Fryxgames, which gets credit in the rules for Assistant Design. 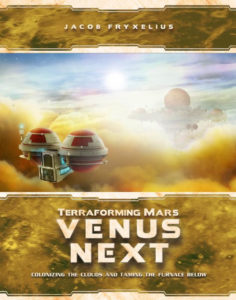 When they were little, Dad Lennart Fryxelius encouraged the children to invent their own board games. In time, the siblings developed various talents where some were good at drawing and designing, others on the logical structure of games. The hobby eventually became a professional business in 2011, when five of the ten brothers started the gaming company Fryxgames.

And, for those with patience, another batch of games may be coming out in the future. The family’s prototype manufacturing facility is near the parent’s home in Karlstad, and there are 60 grandchildren in the family.

Teraforming Saturn, anyone? They already have a variant for Venus.