The Lamps Are Going Out 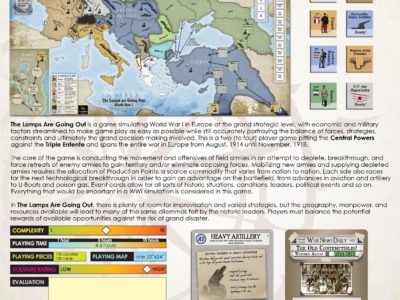 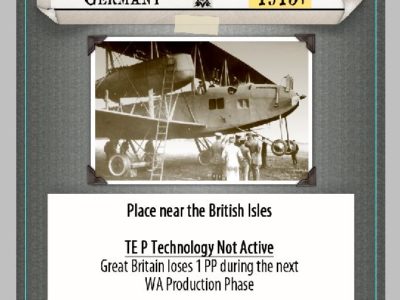 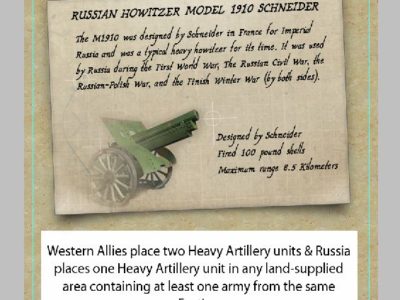 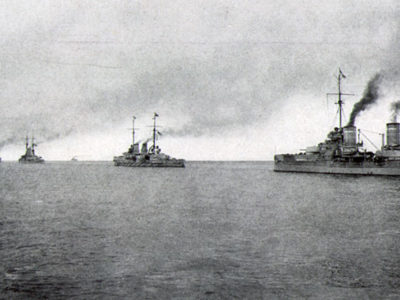 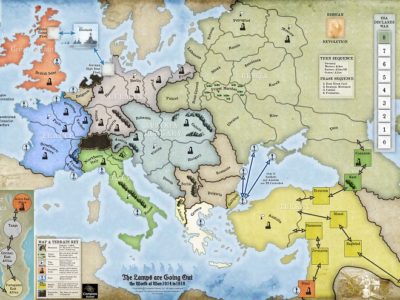 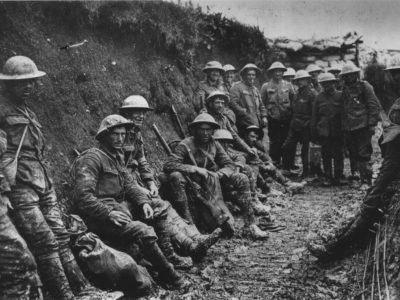 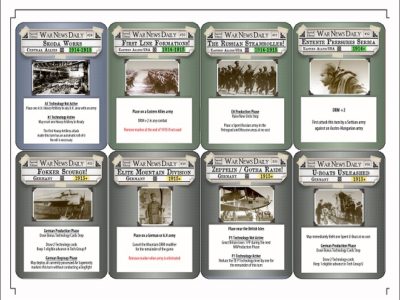 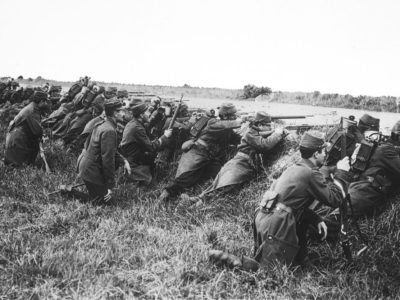 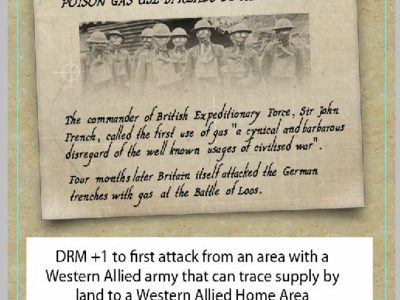 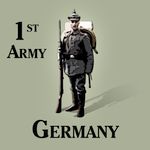 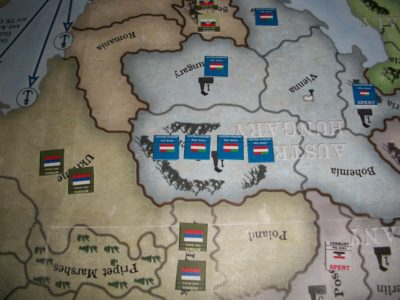 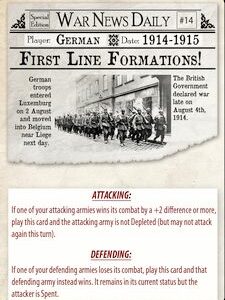 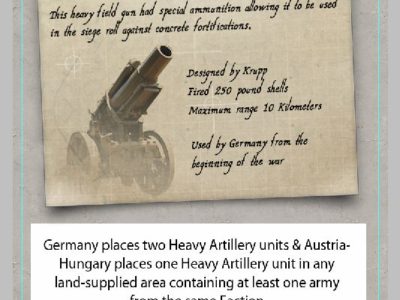 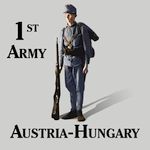 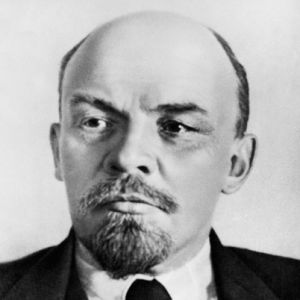 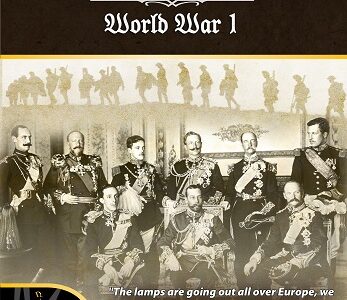 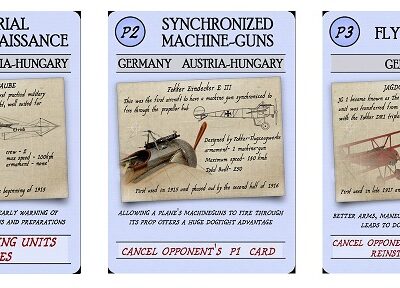 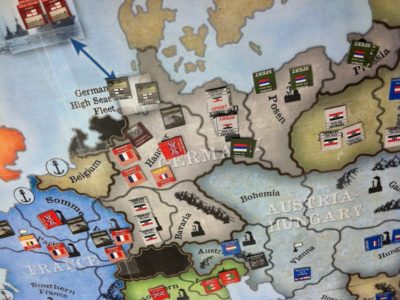 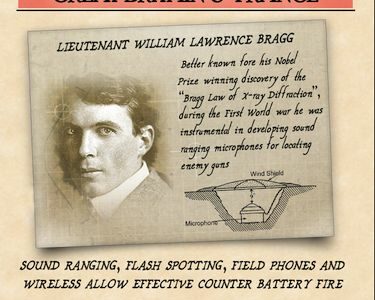 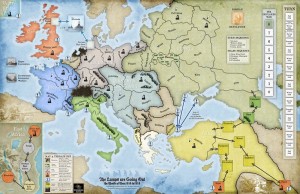 Very happy to get this game on the table and see how it plays out. So far it has been a blast, as the dice have been reasonably friendly to the Germans. I won’t go into the basics of the game, since it was playtested in the club and most are familiar with it.
Four of us are playing.  Me (German), Roger (Western Allies), Stu (Eastern Allies) and Ron (Central Powers).  We made it through 1915 (6 turns).  Next week we start by rebuilding our event decks for the Spring 1916 turn and roll on.
On the Western Front, the Germans added 2 armies to the army group in Hanover and rolled through Belgium and into the Somme on turn 1 going 5 for 5 on the attack.  The Western Allies were able to rebuild a bit, but on turn 2 Germany sent two more armies to reinforce the West front to 7 armies and attacked Paris.  The final attack lead to the defeat of the allies and the French sacrificed an army to prevent the loss of Paris.  On Turn 3, the Spring turn of 1916 the Germans again assaulted Paris with the same 7 armies and again compelled the French to remove an army from the game as the 7th attack was successful against a force of all ‘spent’ armies. 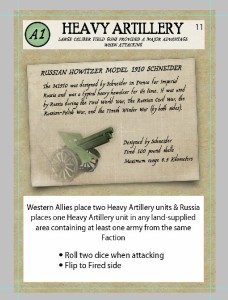 At that point the Russian pressure from the East brought the Western offensive to a halt.  On turn 4 two armies were shipped out to the Eastern front and the German built 2 trenches to replace them in the Somme area.  So far this force has held on there, along with the 3 armies and the Trench along the Siegfried Line.  The allies mounted a couple of spoiling attacks against the defense of the Somme, but otherwise it has been quiet as France is down to 3 production points and Britain usually has 6 due to U-Boat activity.
With the entry of Italy into the War in the Summer of 1916, the WA sent a British army and heavy artillery to Venetia to support an offensive against the AH army in Austria.  Ron mounted a valiant defense, rolling a couple of sixes along the way to stop the four attacking armies in their tracks.  He has since reinforced that front with a second AH army.
(Note: Both areas along the border there, Ventia and Austria, are mountain spaces.  This boosts the defense with a +1drm and if the area is conquered no attacks can be made from that area for the rest of the turn.  The advance stops there.)
In the East, the Russian opening attack against Prussia went poorly and the area was held by Germany on turn 1.  Germany added a couple of armies to that front on the first two turns, but the Russian turn 3 attack finally captured Prussia. Austria Hungary was making a few spoiling attacks out of Galicia to weaken the Russian and force him to rebuild units and counter attack every so often.
Germany beefed up the Eastern Front to six armies and launched a counter offensive to retake Prussia, which failed on turn 4!  It seems that offense rules in the West, but defense rules in the East.  Russia’s offensive potential is stretched as it has only 4 produciton points which is barely enough to keep fresh armies in the field. Germany liberated Prussia on turn 5 and made attritional attacks on turn 6. As the Spring of 1917 arrives there are 7-8 Fresh German armies ready to invade Russia from Prussia.
(Note: Should their capital fall, the Western Allies and Germany have until the end of their next combat phase to liberate it or they are conquered and the game ends.  All other countries, including Russia, are conquered as soon as the enemy captures their capital. For Russia this means that it is defeated the instant the German/Central Powers control both Petrograd and Moscow.  Keep that in mind when defending as Russia!)
Ron could not have been a better ally for the Germans. We mourn the early passing of Emperor Franz Ferdinand, but Germany has been allocating a Production Point each turn to cancel the -1 drm for AH (Shackled to a Corpse) attacks.  He deferred any early attacks on Serbia to put some pressure on Russia.  Now, with Germany ready to take over on that front, the Austro-Hungarian army led by it’s Heavy Artillery and German trained 10th Mountain Army has taken Budapest, conquered Serbia and sent the remains of the Serbian army to Greece.  Salonika is open and a British army is there.  Follow up attacks into Greece may not be the best choice, as a victory there that forced the British to withdraw would be negated and Greece would join the Western Alliance and deploy their fresh army. 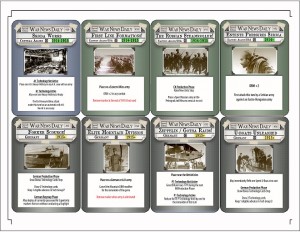 Not much has happened in Turkey or Africa.  The Turks have captured Kars, while the CAU army was away, but the line is now being held. All German raids in Africa have failed. The British successfully attacked the German army there on turn 2 and it is spent, awaiting the event card that will allow it to refit to Fresh as Germany may not spend any Production Points there.
The naval war has been a struggle. The German fleet sortied when the East Asian Squadron event diverted a British Fleet, but failed to win the battle. There have been a couple more sorties, one that damaged all 3 British Fleets, but at present the British control the seas with 3 Fresh fleets while 2 spent German fleets lie at anchor awaiting a few spare production points to refit.
The U-Boat war has been…brutal. Just about every turn the British lose 1 Production, on a couple of occasions 2 production, as the German have been refitting the U-Boat fleet. Germany was happy to trade the 1PP to refit a U-Boat for the chance to drop the British Production by 1 point. (Note:  One important reason to keep the U-Boats refit is that it prevents the British from conducting an Amphibious Assault into Belgium, behind the German front. As long as Germany keeps one U-Boat or one Fleet Fresh the British may not conduct an AA into Belgium).
The Technology war has been won by the Triple Entente.  In six turns they have deployed P1/Aircraft, Q1+Q2/ASW and A1/Heavy Artillery, along with some Poison Gas.  The Germans have deployed Poison Gas a couple of times, but have only the U1/U-Boat warfare Technology deployed.
Bottom line on strategy, this is a game of managing your production points (PPs) and denying them to your enemies.  Base numbers are as follows:
Germany – 12
Western Allies – Britain 7, France 4, Italy 1 = 12
Eastern Allies – Russia 4 (Potential for 5 as there is an event card that boosts Petrograd to 2)
Central Powers – AH 3, Turkey 1 = 4. 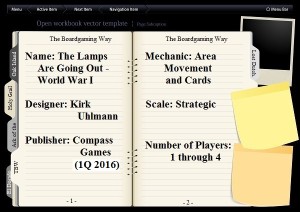 So, even.  The German occupation of Somme has reduced the WA production by 1 for 6 turns, while the Russian occupation of Prussia reduced the German total by 1 for 1, maybe 2 turns.  The U-Boats and events have certainly hurt British production, as they usually have 6 PP, sometimes 5.  Only once do I recall them having a full 7.

This loss of production, along with the permanent elimination of two French armies leads me to believe the the German/Central Powers have the advantage right now, but time is not on our side.  Roger will not be available next week, so we will need someone to ‘fill in’ for the Western Allies.  Any volunteers?

Hopefully Harvey, or someone over at the “Espana 1936” game will give us some insights into what is going on over there.
TT
Game Resources: