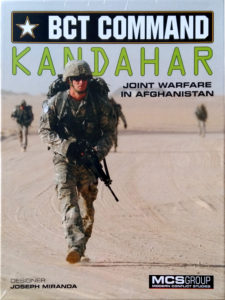 Most of the war games I play tend to be the relatively straightforward conflicts of times past – my Romans against your barbarians, my German tanks against your Russian ones, my Austrian troops against the rest of Europe.

In a way, they are all simple and direct. Move. Shoot. Check supply. Even the Euro Games I play are remarkably direct – get the resources, block your opponents, build the cities or trade routes.

Sometimes, around beer and pretzels, our after-action discussions touch on how realistic the battle was. With metal miniatures, it gets really serious. Did this weapon system really work that well? Is the morale level a little too generous? What about supply?

The big exception are the battles of the modern era. All those armed conflicts that concluded with unsatisfying ends. Take Vietnam, where designers will argue forever over what the victory conditions for either side should be, or the modern-day efforts to stop piracy in Africa – something that had started with the Barbary Pirates who waged an on-and-off war with European shipping that lasted for centuries. Or the endless strife of the Middle East. Or Afghanistan.

Today’s wars don’t end with the surrender of Germany or Japan, or Lee to General Grant. They just ooze on and on in different forms in different places, where opposing forces have different resources, different rules and different goals.

Which brings us to the very interesting, very creative and very different game designed by Joseph Miranda. Welcome to Kandahar, where the victory conditions change every time you play it, where both sides have safe havens where they can never be attacked, where bribery can be an important weapon and where commanders on both sides can only guess what they have to do to keep their opponent from winning.

Did I mention that this game is a challenge? A really good one. One word of caution – it’s a graduate-level war game. You have to put some real effort into it to get the really good stuff out of it.

It doesn’t play like most war games, where you have an army and fight another army or where everyone is in competition for resources to build houses or kill zombies. It takes both sides of the conflict in Afghanistan and shows what happens when different goals have to be accomplished, and when different kinds of units with very different support assets have to do a job they may not be designed for.

Naturally, neither side knows what victory conditions it will be drawing, and can only guess the goals of their opponent.

This becomes clear as soon as you set it up. You are assigned specific troops and headquarters and other resources in each scenario. But, there is a choice of assets – you pick some and draw others at random – which makes it a challenge to get the right units with the right back-up in the right place at the right time. Just like real life.

Allied forces sometimes have to go out kill terrorist units, or destroy the infrastructure the enemy has built to win over the local population.  Or, maybe, the insurgents just have to disrupt things a bit and get victory points for creating a climate of distrust against the local government.

Air support won’t help the allies against enemy units that are blending in with the local villagers, and when they concentrate forces to attack an enemy stronghold, they become a really tempting target. Or the allies might learn their opponent is raking in victory points by building a garbage collection network and supplying water to isolated villagers in another provence.

And the goodies just keep coming. At the end of every turn, one of the 24 Chaos Cards is turned over, and the impact is – as in real life – sometimes really minor and sometimes dramatic. You have caused civilian casualties and your opponent gets three victory points, or your opponent’s supply chain is disrupted and they have to discard any joint operations cards in their hand.

There’s a really attractive picture of some insurgents picking poppies on one card, and that player gets two militia units in any district where they have an unsuppressed infrastructure.

Now there is a drawback to all this good stuff. Its a very difficult game to play solitaire. You can’t avoid knowing what both sides are doing, and while picking random cards gives some of the flavor of the game, it doesn’t come close to the effect you get when two players are battling it out.

There are four scenarios in the game, from 10 to 20 turns, ranging from what is effectively a recon in force to the big Allied surge in 2009. One scenario shows what might happen if the insurgents declare a jihad against the coalition forces.

And, to get to the heart of the game, while it may seem like a lot of the action does not involve direct combat – and it doesn’t – you are quickly put into the boots of a field commander.

Do  you use your J-3 operations card to attack the enemy or to buy an air asset to put on one of your troops. Do you pull units out of the off-map reserve, or do you try to recruit them in friendly districts? 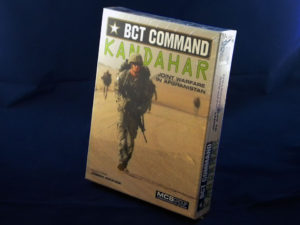 One thing that long-time gamers may overlook at first are the game definitions, because we all know what things mean and because they are put out, rather artistically, along the full left-hand edge of every other page in a brown-colored box. But, ignore it at your peril. If you do, you will keep turning the pages back and forth trying to figure out just what you can do with those joint operation cards (labeled J-1 to J-9) or just how you get control of a district.

I also recommend reading the design notes before you start to play. It won’t give you a clear strategy – there are just too many variables for that – but it certainly will put you in the proper mood to play.

Having to deal with all the moving parts and all the changing goals of this conflict will give players some operational understanding of why we are still in Afghanistan.

Remember the old saying about being up to your armpits in alligators and trying to remember you were trying to drain the swamp? Well, we invaded Afghanistan in October, 2001, to destroy el-Qaeda and remove the Taliban from power. George Bush called it Operation Enduring Freedom.

The Russians spent a while in Afghanistan, too. Their war lasted from December, 1979, to February, 1989. Don’t ask me who won.