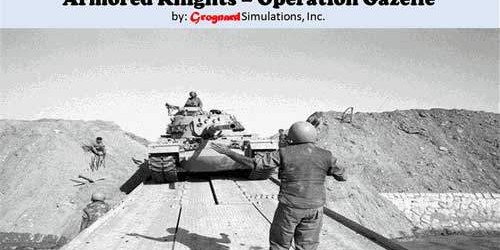 “It is a strange fact that nowadays most people who design wargames have never been in the military (for that matter, neither are the politicians who fight wars). So I was intrigued when I came across the website for Grognard Simulations, a Texas publisher of paper wargames. What caught my eye was the bio of the company president, Chris Fasulo Sr., a 1980s-era U.S. Army armor officer who conducted command post exercises and directed the opposing forces team at the Fort Dix Battle Lab, then worked for Raytheon to provide CPX simulation support for the U.K. and Canadian militaries.

This was interesting. Would a designer with a military simulations background produce a better wargame? So I sat down with one of Fasulo’s games: “Operation Gazelle,” the Israeli counteroffensive that crossed the Suez Canal in the 1973 October War……..”