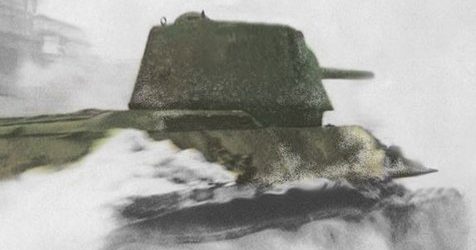 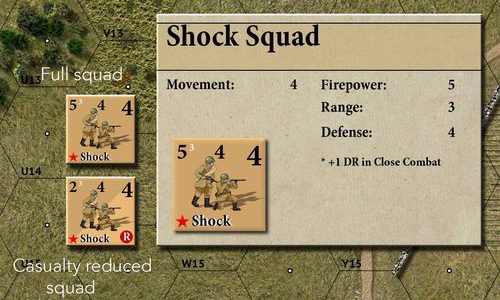 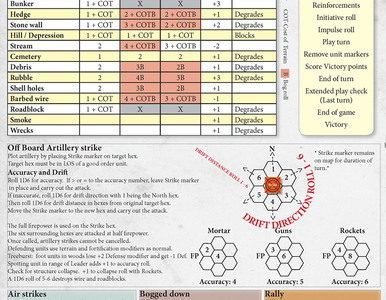 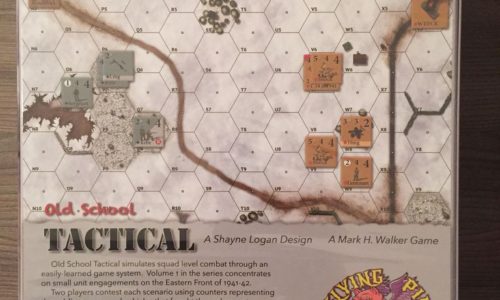 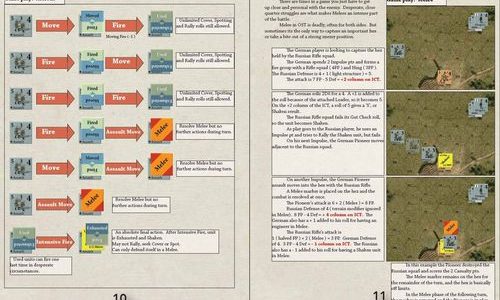 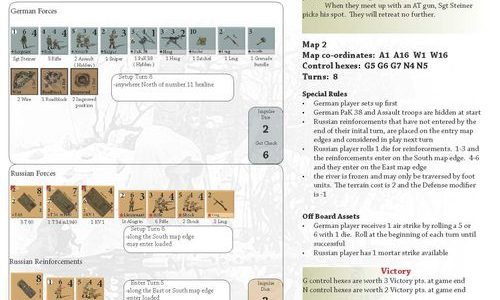 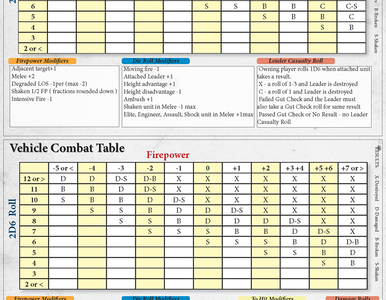 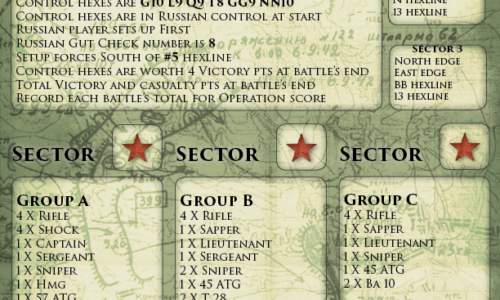 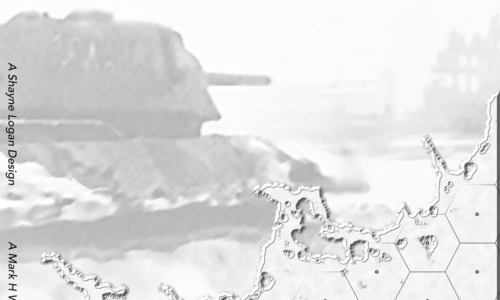 Old School Tactical is a big game of World War II battles – mainly small unit tactics – between German and Russian forces, which is something you could say about half the games on the shelves in my game room and in my basement.

There are lots of games like that. Some are good, some are not. And, sometimes, someone does something really impressive, kind of like watching a great actor play a role you have seen lots of other actors try before. Hey, Jeremy Brett has really become Sherlock Holmes. Wow! 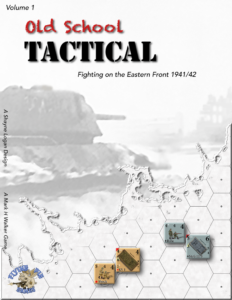 ( All photos used with the permission of Flying Pig Games. Click to enlarge.)

Everything in gaming is subjective, of course. But, when it comes to World War II games, Old School Tactical makes the cardboard battles seem really new again.

It’s really well put together, with an innovative operating system, lots of game detail on unit abilities presented in a simple format, more counters (and they look really good) than anyone has a right to expect and some surprising bells and whistles. Especially the luck cards.

So, how do you evaluate at a game like this?

Naturally, you compare it to Squad Leader, the award-winning 1977 John Hill game that a lot of people say marks the beginning of modern war gaming.

In truth, the comparison doesn’t work. But, I kept making it as I looked at the individual counters for infantry and non-coms and officers, the grenade bundles and flamethrowers they carry, and the support weapons troops that may or may not show up in time to save a threatened and shot-up unit holding onto a critical bit of terrain. Lots of similarities.

Such is the human condition. We make comparisons when things look alike.

But, the comparisons only go so far. And, hands down, Old School Combat outranks Squad Leader in just about every way.  Ah, what 40 years and good computer graphics can do.

Well, a lot of squad-level World War II games do look alike. Hey, I have a 6-5 tank counter and you have an 11-4 anti-tank gun. Let me try and flank it. And, just where is your hidden infantry support?

But, not many games provide what Old School Tactical does. In a lot of ways.

The tank counters aren’t 6-5’s. You get a card for each vehicle detailing its front and flank armor, weapons strength and range, secondary weapons….well let’s not get bogged down here. Every unit has a card with those kinds of details, including the dreaded NKVD.

There are better things to look at in Old School Tactical.

First, the game map, counters, and rules are surprisingly well-done, a sort of unexpected bonus. The three-quarter inch counters (I measured them) use images of soldiers or vehicles (tanks have a small red triangle showing facing) or are markers with graphics or words to show which units have moved, which have been broken or bogged, and which are in cover or in a minefield. 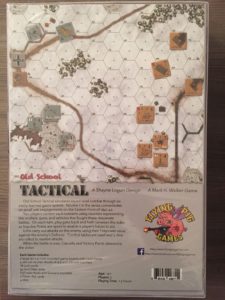 The game board itself, printed on heavy stock, clearly shows terrain features, roads, buildings and other important details. It’s one of those maps that unfolds into six sections, but the scenarios you will play will take part on just a small section of it. And, yes, there are markers to put down to show the playing field margins for each scenario.

Of course, you could use all the pieces and you and a friend or two could try to use the entire map to fight over. Kinda like a beer and pretzels game. But, make sure you have a couple of cases of beer, a cabinet full of pretzels and, oh yes, you won’t get it done in just one weekend. There might be enough time if you and your friends all retire.

By the way, there are actually two boards – summer and winter in Russia, you know – and when folded up, they take up most of the 11 by 16 inch game box. Which is why it is so heavy.

Now, of all the counters and markers and playing aides in Old School Tactical, the most important for me was a small piece of blue cardboard marked “Impulse PTS” with a little light blue mark in the center.

When I look at a new game, I sometimes overlook some of the obscure markers. Bad mistake with this one. 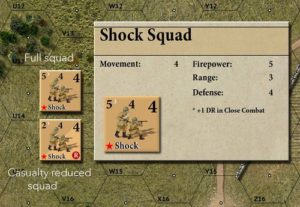 The counter is important. It shows how many impulse points each side has each turn, and players need impulse points to have their units move or attack. You get them by rolling dice each turn, with the number of dice determined by each scenario.

Losing five units means that you lose one point from your roll.

That means your enemy, at any time, can do more than you can. Since the sides alternate moving units, deciding when to pass becomes a real tactical decision. It is a major engine for the game.

The 26 scenarios that come with Old School Tactical start small and grow bigger, adding more kinds of units, the number of turns played, the terrain used and the special weapons and off-board support. 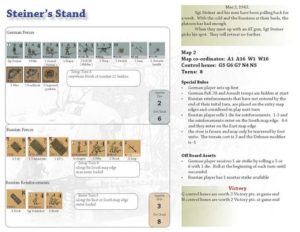 That process reminds me of one of my favorite old games, the original Starship Troopers, where the scenarios also got bigger and more complex. I never got around to playing the last, biggest contest between the humans and the bugs. And, I suspect I may never get around to playing the final two-page scenario here called “The Hedgehog” – part of the Russian Third Shock Army hitting heavily-armed Germans dug in some villages in December, 1942.

Still, it would be fun to see what happens when the Russians get two artillery strikes on turn 12 (or even to see where it might drift), and a rocket strike on turn 20, or how the Germans use their air strike on turn 14 and an off-board mortar on turn 17.

Did I mention this is a big game?

Surprisingly, as I started playing a couple of scenarios, I did what almost every player does, looking at the strength of my forces, picking out the best terrain to accomplish my missions, and calculating the best attacks or defenses. It’s easy to do when there is so much detail available.

Then it began to sink in. The developers have put a lot of uncertainty into their game mechanics. Heck, they even told me in the rule book. “The impulse system used in Old School Tactical represents the uncertainty of battlefield command,,,poor communications, fear under fire…and a thousand other things.” 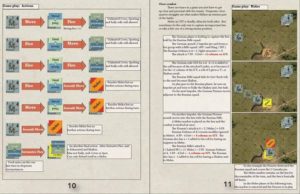 You might call those quirks luck, except there are also specific Luck cards that are used – generally one to each player – as part of the game. The cards are drawn face down and used whenever a player wants to. Some give modifiers to die rolls or call in AM artillery strike. One allows you to start with a hidden unit (just don’t put it down on the board) and another called “lost” lets you move one enemy unit up to three hexes.

You can’t cancel out the built-in luck factor by just agreeing not to use the cards. But, you can balance out a game between two unevenly matched opponents by letting the novice draw one or two more of the luck cards. Of course, as the rules say, if they draw a Tank Shock card and the scenario doesn’t call for any tanks, they are simply having bad luck.

There are some other things in the scenarios that take some getting used to. I’ll give you the first one that I found. You can have the joy of discovering the rest for yourself. 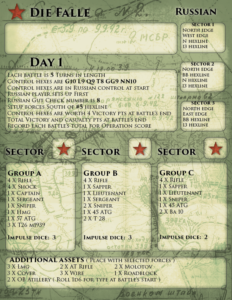 In the first scenario, Brandenburgers,  the Russians set up first and have to defend two key hexes while checking each turn for being disorganized. Then I read the set-up twice and realized there was no restriction on where the Germans set up. The result was a bloodbath, although with six German infantry and eleven Russian it wasn’t the overwhelming victory that I expected when I started to play.

Then I counted the spaces and realized there wasn’t enough time in an eight turn game to bring the Germans in from the edge of the board. The rules were smarter than I was.

That got me arguing with myself. After all, the German commandos were dressed in Soviet uniforms and were infiltrating enemy lines. So, setting up close is just doing what they were supposed to be doing.

Which is grossly unfair to the Russians, who knew the territory better than the Germans and who would be sending out patrols just to keep the attackers from sneaking up on them. 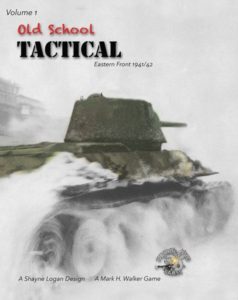 But, what was the point in infiltrating your troops if the enemy can watch you coming at them? And, even while in panic mode, the Russians can shoot back, although not quite as well as they used to.

And so it went. For two cups of coffee.

So, score another one to the game designers, and let the bloodbath begin.

Well, the rules and the game design did their job, and I did my job. The troops on both sides melted away and an undermanned critical attack for the two control hexes was launched at the last minute.

It was all very Old School.