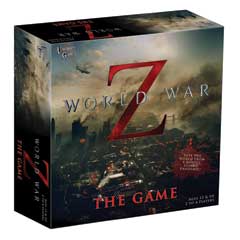 As relentless and inevitable as a zombie horde, it is no surprise that World War Z has spawned an official board game. Called “World War Z: The Game”, it tasks two to four players with the demanding job of halting the onslaught of the undead.

The World War Z board game looks very much like the popular board game Pandemic, where the players race to save the world from multiple virus epidemics…..