A Review by Mitch Freedman

Back in the early 70’s, when wargaming was growing into its first Golden Age – courtesy of Simulation Publications, Inc. and its game in a magazine subscriptions – there was a problem looming for the fast-growing hobby.

How do you sell war games covering every period of history (and later fantasy) to people who don’t know how to play them?

I came to the hobby later than many of my friends, and I found that war gamers took pity on me, taught me how to play, and – I later learned – managed to “forget” to instruct me in those one or two key points I needed to actually win a game.

It explains my love-hate relationship with rules, which continues to this day.

What does this have to do with Hell’s Gate, you may ask? Simple.

SPI, with its first subscription, also sent you a “free bonus game,” which had just a few rules, a map the size of a post card, and five or six cardboard counters for each side.

Whether the battle was between Russians or Germans or Greeks and Romans, there was always the name of a town or of a river or forest, and the battle generally showed how troops fought each other and how terrain could cause problems with movement.

You learned fast, and you learned easy. Those introductory games didn’t provide much of a battle, but they did their job, and new gamers by the thousands started buying war games.

That brings us to Hell’s Gate, which is actually one of eight games published in Sabin’s book “Simulating War.”

He designed the game to show how a large army envelopment works, and picked the Battle of the Korsun Pocket in Ukraine in early 1944 to make his points.

How well he did that is something everyone who buys this game will decide for themselves.

The problem is that you can’t put a really big conflict in a small box. And, people who look into the history of the battle will find that there was just too much going on to simulate in a game with only about 50 unit markers.

It was a battle in which both sides made heavy use of air power and where there was massive artillery support. There were attacks and counter-attacks, and for the Germans – who were decidedly outnumbered – heavy tanks seemed to fly across the battlefield to shore up weakening and ever-changing positions. Not to mention supply problems, mud and a harsh winter.

When it was over, both sides claimed victory. Both sides always seem to claim a victory after large battles. Just look at Dunkirk or Antietam. And, while the Russians clearly won the battle while suffering huge losses, military historians are still arguing over whether the German troops losses and their breaking through the Soviet lines to get away was really a victory, and for which side.

Which, in hindsight, sure sounds like Dunkirk or Antietam.

But, put that aside. Those questions make you look at Hell’s Gate the wrong way.

What you get in Hell’s Gate is a really good introduction to war gaming and a really, really good lesson in reading the rules. Plus an innovative play sequence, which should drive old hands up the wall until they go back and really read the rules and understand what they are trying to do.

Each side, in turn, declares the supply status of all their units, then has combat, then moves. The turn ends for each player when they check supply status again, and remove the “out of supply” markers from units which have come back into supply from the last turn.

It isn’t easy. Attacking before moving creates real problems, especially since there are penalties for units which attack while out of supply. And, there’s a certain twitch which comes from moving your troops into a place where you know the enemy will be shooting first.

The combat results chart also looks familiar. Two numbers, one on either side of a diagonal / line, with the numbers getting bigger and bigger as the attack odds go up.

But, it doesn’t show losses for the attacker and the defender. It shows only the loss to the defender. The bigger number applies only if the attacker voluntarily reduces one of their two-step tank units in what is termed an “all out attack.”

All of which are, naturally, explained clearly in the rules. The game is a strict teacher when it comes to reading the rules.

There are also special rules for turns one, two and three, as well as turns five, seven and eight, which is the last turn. To mix a metaphor, its kind of like Adam Smith’s invisible hand guiding the battle to where it was historically. 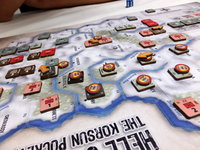 So, Hell’s Gate gets high marks as a teaching tool, which is one of the goals. It also gets high marks for showing little things like concentration of forces by not allowing more than two units to attack through a single hex side in a single turn. You can stack as many units as you like, but you just can’t use them all. A nifty way to solve some problems on a board which has less hex rows than game turns.

But, how is Hell’s Gate as a game? And, how does it work as a military simulation?

Those questions are a little more tricky to answer, and only partly because they are really subjective.

The game has a high solitaire rating, which is appropriate. The odds table varies so much that you can’t be sure how an attack will work, and so you end up playing a whole batch of individual battles rather than a great sweeping movement across the board.

Playing it alone means you quickly get engaged in figuring out which units should be attacking, and when to sacrifice one of those big tank units to improve your attack odds.

Both sides know the Soviet side is probably going to win. But, at what cost? Every unit they lose costs points, and points are what wins the game.

What you do not get in Hell’s Gate is a grand break-through. Units can be surrounded slowly – the rules make that a particular problem for the German player – but there are no dashes through open terrain once a line is broken.

That’s because most units can move only one hex. The armored units can move two hexes, but they may not be able to find the open space to do it because of the game’s initial placement.

All of which makes an interesting puzzle, especially since the attack then move turn sequence isn’t easy to master the first time you play.

The final question is how well does this work as a military simulation? Well, beauty is in the eye of the beholder.

One problem with the game is that it is forced to compress time. Each turn covers three days, which makes it hard to focus on individual actions, just larger trends.

The big picture approach also makes it hard to show how weakened units stood up, since most of the counters are just one step – they either retreat and live or just die after a fight.

The artificial restrictions on which units can attack on which turns, and where units can retreat works to move the game along lines which reflect what actually happened.

But it also has players thinking “I have to sacrifice my big tank unit to cut those enemy units off from supply,” which seems a bloodless way to recreate battle conditions.

Its the kind of decision a General Staff would make, but somehow doesn’t fit into gaming as much as it does accounting. Its like saying: “Hey, I need some time to re-group. Let me just flip this counter that says 300 Spartans over to its ‘dead’ side and get an extra turn to move the rest of my army.”

And, since the subject has come up, the accountants win again at the end of the game, when the German player gets an extra 10 points to help bring the game into balance.

After the battle – the fighting took place between 24 January and 16 February, and weather was certainly a factor – both the Germans and the Russians claimed a victory.

Military historians are still debating the numbers, but the following is a good starting point. Russian forces recaptured more than 200,000 kilometers of territory, and destroyed the German Army Group Center.

Of the roughly 60,000 German troops originally trapped in the Korsun-Cherkasy pocket, more than 40,000 broke out or were flown out. The Soviets greatly overestimated the number of enemy troops they were facing, which explains why Marshal Konev originally claimed to have inflicted 130,000 casualties.

The German army did lose most of its equipment, in combat and because their supplies were only about half of what they needed for a sustained battle. Tanks were running out of fuel.

But, they started with an army of more than 300,000 men, and Soviet artillery outnumbered the Germans five to one.

It was a big, long and chaotic battle, with dramatic acts of heroism, equally    dramatic errors in judgement and          operation on the part of some commanders,  and ended up with the Soviet troops surrounding and eliminating the        German  salient on the Dnieper, which Hitler had insisted on holding at all costs.

The massive German pocket had shrunk to only about five kilometers when Field  Marshal von Manstein ordered the    breakout, and the remaining infantry started    marching toward the Soviet lines in the dark, with fixed bayonets.

Its the kind of detail that this game can’t capture. Its scale and time frame won’t allow it.

But, no one can ever combine the massive scope of a battle this big with the kind of battalion-level actions that exploded in the muddy fields and roads as the battle slowly oozed to its conclusion.

For my part, I enjoyed playing a game with a different combat system for an interesting but one-sided battle, and to go do some research and take another look at how the view of what the Soviets originally called “Stalingrad on the Dnieper” have changed over time.

Heck, even Stalin made those early claims of a great Soviet victory vanish as the losses his army suffered started leaking out. And, naturally, no one on the Axis side publicly challenged Hitler’s decision to hold the ground his armies had taken, at least until after the end of the war.