Popular Mechanics: Everything We Know About the Air Force’s Secret X-37B Spaceplane 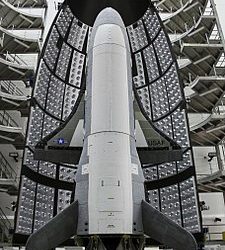 “Think of the X-37B as the Space Shuttle’s smaller, younger brother and you wouldn’t be wrong.

With its bullet-like shape, stubby wings, and two tone black and white appearance, the X-37B Orbital Test Vehicle looks like a smaller, cuter version of the manned orbiter that served NASA for decades. That’s where the comparison ends though: property of the U.S. Air Force, the secretive, unmanned X-37B is built to spend months in orbit, carrying out classified missions on behalf of America’s military space program…”