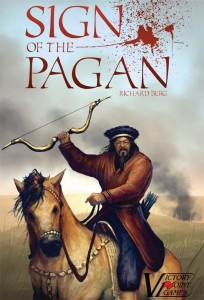 Let’s begin by stating the obvious.  Richard Berg has probably written more war games than I have ever played – a wide range of entertaining games with a wide range of game  mechanics and on a wide variety  of subjects, from historical to fantasy.  One of them,  * holds a special place in my heart. It’s one of the first games that I taught all three of my children to play and now it’s the game I will teach their children to play.

Except for my younger daughter, who – at the age of 10 or 11 – ended up teaching me how to play it by totally destroying all of my national guard units. Kids know stuff.

Now, to get back to the battle that sealed the fate of European civilization for a thousand years, stopping Attila’s sweep across France and replacing the threat of a savage Mongol domination with the long, sad history of the Dark Ages.

Sign of the Pagan is designed to recreate a battle that took place in Gaul in 451 A.D. between Attila the Hun and the combined forces of Theodoric and Aetius, one of a handful of military conflicts which actually did change history by preserving existing order in western Europe.

Game components for Richard Berg’s Sign of the Pagan – BGG

When you lay out the playing pieces, you see two lines of troops facing each other in a game system that always gives Attila the first move, and a die roll chart that says 40% of the troops under his personal command will likely cause harm to the enemy before anyone else on the board can fire a shot.

The rest of the game quickly gives new meaning to the phrase fortunes of war. Think of it as the fog of war settling in fast and dense, which makes this game ideal for solitaire play. And, a challenge for two players.

You can’t really argue that first powerful attack by Attila is unrealistic. No one can say with certainty just what actually happened in this battle. 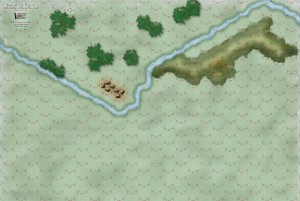 Berg gives you a lot of clues about the ahistorical nature of Sign of the Pagan. And, to make sure you don’t miss them, he puts them in shaded text boxes.

– No one knows exactly where the battle took place…many modern sources throw a river in as a flank anchor.
– The Roman-Gothic forces are a mish-mosh of hastily gathered Gallic area allies…we estimate that both armies, apparently of equal strength, contained from 25,000 to 30,000  men.
– Not much flanking action occurred, or at least no discussion of such.

That last note is important, because the game only ends when one side achieves victory. There is no turn limit. And, victory is easy to determine – the side that loses 12 units at the end of a turn loses.

Easy, but not simple. You can try to pin units with a shock attack, or harass them with arrows. But, arrows alone won’t kill an enemy, unless you hit them twice and they fail a morale roll. And coming into contact with your foe can turn out  deadly for you as well. But, if you can cut off their retreat, there is hope.

The Hun’s first few moves will likely involve coming close to the enemy and trying to disrupt him with some well-placed arrows. It’s a good strategy because a successful attack will normally weaken several units –  reducing their strength, reducing their movement and reducing or eliminating their ability to attack on their turn.

The European forces have some archers, too. How to use them best depends on when they are called to move and attack, and in what position they find the enemy.  Once a unit is reduced, doing absolutely nothing for a full turn while out of range of the enemy gives it a 50-50 chance of coming back to full strength – they can escape to fight again.

The game gives, and the game takes. Retreating may let troops regroup, but  those disrupted units must not be in contact with an enemy unit, and can do nothing else in their activation phase, including plugging holes in a line.

Damaged units can also counter-attack and possibly do some damage, but risk getting killed should they be attacked while they are disrupted.

The way to kill enemy units – at least to have a solid chance to do it – is to disrupt a unit which is already disrupted.  Which leads to the tempting idea of breaking through a solid line or outflanking the enemy. That could make that imaginary river and those few hexes of forest very important, because they reduce movement.

Back cover of the game “Sign of the Pagan” – BGG

Players also have to pay close attention to which units have already moved and which still have options to move and attack. But don’t over think your attack. Doing nothing can be the worst option a player has. Its worth repeating the sole victory condition. The side that loses 12 units first loses the game.

If all this isn’t enough excitement and unpredictability for you, there are the action cards. There are eight for each side, and each side gets to pick four of them at random.

Those cards can change the outcome of a battle, or may do nothing at all. And, you can use them any time you want. More fog of war. While the Huns have all those archers, some luck in randomly drawing cards can help change the odds for the western allies. But not if the cards they pick read “no effect.”

Now, for the little engine that drives the game – five little round circle markers that are called Contingency Activation Markers (CAM). They show which units move.  Some of those CAM markers are printed with a +1 or +2  (the Huns get a +3). Before any unit moves, both sides draw a CAM and add that initiative bonus to a D-10 die roll. The higher number is the unit that moves. The losing side just puts their chit back in the container for the next draw.  (Because this can lead to one player going five times in a row, Berg includes an optional rule that lets the player who loses the initiative roll automatically move one of their units on the next turn).

So, even before the first turn is over, you will find the two neat lines that faced each other in the initial set-up starting to break up. As the battle progresses, it just gets worse.

That means the Huns have a big advantage, since they go first and have lots of bow-armed cavalry. But, they can also be shot at, and once they have moved there is no chance for them to attack again before the opposing archers get a chance to try and cause some damage.

The other way to kill off units is to outflank and pin opponents, or attack in hand to hand combat. But, there is a problem here, too. Units can never stack, even while moving. So, it’s easy to have some of your troops get in the way of other troops,  depending, of course, on which CAM activation chits get picked.

Once the solid lines of the initial game start to come apart, it becomes a new game. Advantage Huns, since they have lots of bows and their cavalry has lots of movement. But the ebb and flow of initiative becomes as much a part of the game as the attack range of mounted bowmen.

The Huns will need some luck and a better plan than just shooting arrows at an enemy who can withdraw his troops and rebuild their strength.

Sample Hun and Roman cards from “Sign of the Pagan.” – BGG

In my admittedly short experience with Sign of the Pagan, it seems the best chance for the armies of the western Europe to defeat the Huns is to force shock combat – the game term for hand-to-hand fighting – whenever possible.

The odds will favor the Hun player if the game becomes just an exchange of bow shots. There are more of them, and they can concentrate fire on just a few of the European troops.

The resolution of shock combat is a little unusual, too. Units have two front hexes, and every enemy unit in contact must be attacked, either by the unit that is moving or another unit from his group. Each attacker and defender roll one D-10 die, and if the number is equal to or lower than its shock value, the enemy unit is disordered. And, while they can defend, light infantry and light cavalry can never shock attack – advantage Europeans.

An outnumbered European unit – particularly one that is stronger than the enemy being attacked – can fight on each of his front hexes, giving it a chance to quickly thin out the enemy line. Two really cautious players can play this game for hours, although things will move really quick once one side starts to lose troops in one or two spots on the battlefield.

And keep in mind that a reckless attack can end things very fast. That’s because a loss of even a few troops can be magnified by those activation chits, effectively  giving up one combat round every turn because there aren’t many troops left in that unit to fight.

Fair warning. While it’s a cliche to say that no battle plan lasts much beyond first contact with the enemy, it’s certainly true in this game. Uncertainty seems to be built into every move, and the odds table makes the results of combat uncertain.

* = The Creature That Ate Sheboygan is, indeed, as great game. And Mitch is a great national guard player in it. But the designer was Greg Costikyan, not Richard Berg, just as commentator David Spangler posted below. All we can say is “Even Homer nods.” – Ed.