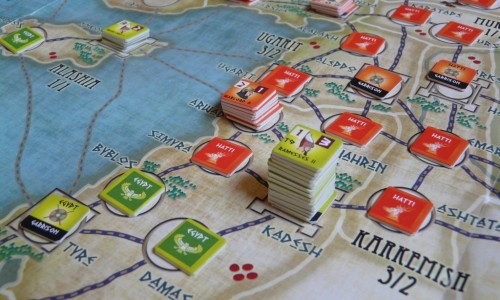 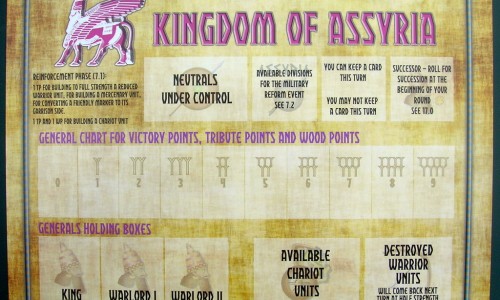 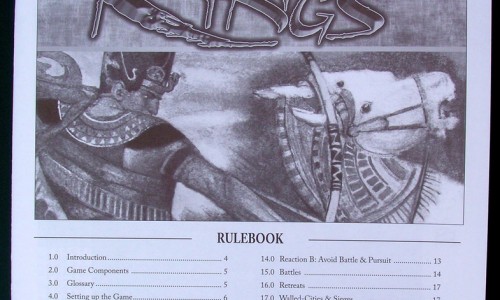 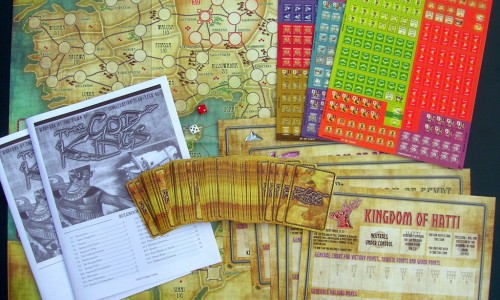 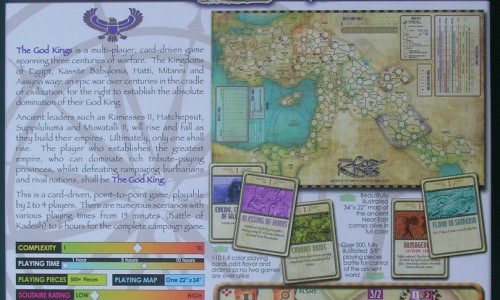 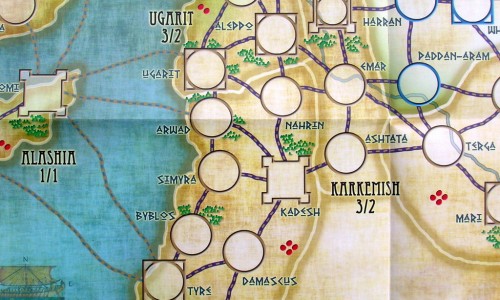 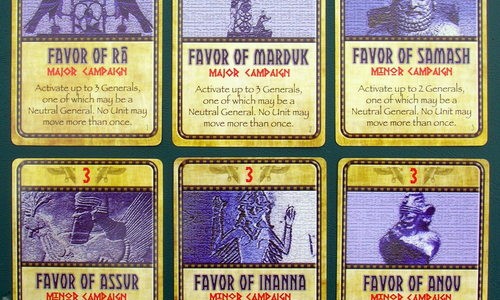 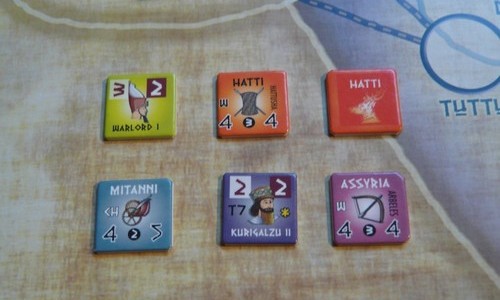 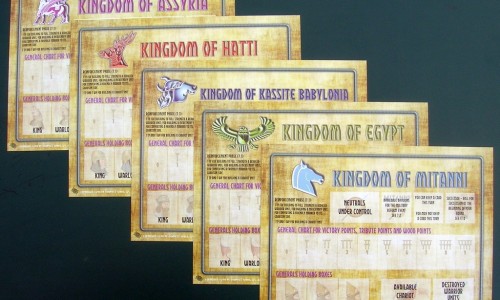 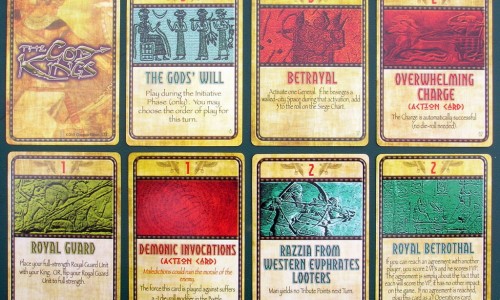 The God Kings – A Review 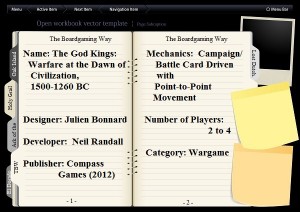 Over my years of gaming, I have battled in just about every era imaginable, from the earliest stone age – that dratted Settlers of the Stone Age – to far future battles beyond the stars. Yeah, the dratted Settlers – Star Trek makes a nice bookend to my board gaming life.

And while I have found some pretty good games for just about every era – with the help of some rare gems out of the old S&T magazines – one epoch has always stayed in the background – the one that is easily labeled “ancients.”

Most of my ancients games have been relatively simple – spears against chariots, fast-moving but weak slingers against slow-moving but very powerful massed troops. Throw in a river or a marsh and there you have it – a nice, simple beer and pretzels evening.

Now, with The God Kings, I have to revise decades of wise cracks about how simple it is to play ancients. That remark goes into the same graveyard as, well, “Napoleonic games are simple, just put all your soldiers into a line, or maybe a square, and march forward.” 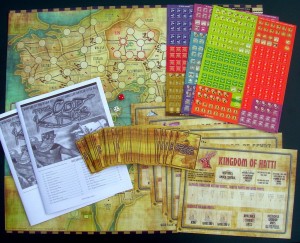 Here is an ancients game that  is more than worth the effort to learn. It does a lot, and does it with flare. It follows the Egyptian armies and the Kings who led them from a simple introductory scenario – the Battle of Quadesh between Egypt and Hatti – to a monster campaign game that the designers say should take eight hours to play out.

The rule book says the introductory scenario can be played in just a half hour, but it took me a lot longer. And it took even longer the second time, because I missed a lot of the good stuff the first time around. There are a lot of wrinkles and quirks here, and what starts really simple soon becomes quite a ride.

There are cards to be dealt out, reinforcements to bring on, and a strategy phase with five rounds. Plus neutral armies to put into play, dead troops to bring back, victory points to calculate and the elusive hope that you will achieve that much-wanted Sudden Death Victory.

It’s hard to say just when I realized that the waters had gotten really deep. Probably when I found out that Neutral army troops can be taken over and played  by either side, but that the player who has control may just see another neutral force activated against them in the next round.

Or it could have been when I started to discard the cards. I really wanted to keep one. And the rules allow it. But, the rules also say you can only keep one of your cards every other turn.  And who knows what the next hand will bring. Jam today or jam tomorrow? 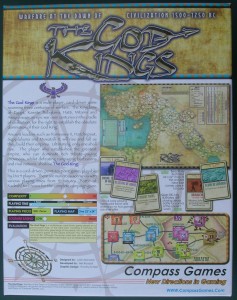 Even some of the really simple stuff plays differently here. Usually, when I try to interdict an enemy unit, I either do it or I fail and it moves on. Here, when I saw an enemy unit trying to sneak past me, I failed to interdict but was able to try again – perfectly legally – in the next space.

There are  no hexes on the board, just paths – call them roads or trails if you like – between hamlets. But, you can have two or three paths going in the same direction in parallel lines, or spinning up and back.

Then there are sieges, political control, diplomatic initiatives and the ever-popular barbarian invasions to deal with. And, oh yes, you should take a good close look at the Battle Table, a combat results chart that with modifiers allows you to roll anything from a -3 to a 10 on one six-sided die.

Now overlay this with cards that can help or punish you, adding or subtracting die roll modifiers, bringing dead soldiers back to life or turning a draw into a victory when the God King enters the battle and you have a game that does a whole lot. It was a lot of fun, even if it took me twice that suggested half hour to get through the first scenario.

As you can tell, I am delighted with a lot of what has been put in The God Kings, but it takes some getting used to almost every turn.

Start with the map. The various kingdoms of the ancient world are laid out along the Mediterranean Sea, not to geographic scale but very handy for game purposes. Armies travel along paths, with cities and walled cities – as well as fortifications and tribal paths – marked with clear symbols. 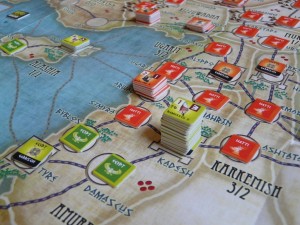 But it’s not a simple “push me-pull me” kind of game, with not much room to try and maneuver. There are lots of paths, and every village and city they link up has political control markers. You control a province when you have taken all of its walled cities and control a majority of its spaces.

The map also has choke points that can disrupt an army’s advance, a problem that may not seem worth worrying about when you start to play.  And, with each turn representing 25 years, there is the issue of royal succession. Wait long enough, and your poor military leader may just die and be replaced with someone much better. Or someone worse.

Finally, there is the matter of luck. Certainly there is a lot of chance built into the combat results table, but you have a lot of control when you roll a D-6 because of the modifiers. The results chart for that six-sided die runs from minus 3 to 10.

But, all of those things are just the prelude. The most important part is in the cards. More on that later.

The scenarios give an order of battle and tell you who goes first. There is no stacking limit – a player can put their entire army into just one of the little circles that mark territories. But, they can be attacked on the next combat initiative – there are four in a round – and the big divided army just beyond their reach on the first move could counter-attack and do real damage.

Or not. Your enemy might just have a card that cancels the battle. 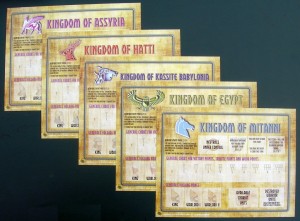 Combat losses are taken in two steps by units. First they are turned over to their weaker side, and a weaker units die – only to come back as a reinforcement which can then be built up again.

It’s not an easy game to play solitaire, since it’s really hard to outthink yourself and you can’t ever bluff. Still, the luck of the die roll and the play of the cards gives you something different to respond to every time the initiative changes sides.

As you can tell by now, this is really a nifty game to set up and play over a few weekends. Give a lot of credit to the cards. The designer calls them “the soul of the game.”

The God Kings represent the conflicts in the ancient  world, but the cards split those conflicts into two realms, gods and kings. Some of the kings are more powerful that others, some are almost pathetically weak. And, so it is with the gods.

it might better have been called Gods and Kings. The kings pick the armies and decide where they start and where they should go. They decide which armies to get reinforcements and which objectives to go after.

And they do it by making the all-important decision of which card to play, and how to play it. Naturally, each card has at least two options. One of those two options always lets you do one of seven different things, from activating a general or an army to trading for supply points.

The other option is to use the event described in the text. That’s where the gods come in. Some of those events are immediate actions, such as canceling a revolt or making a king ill and temporarily removing his powers. 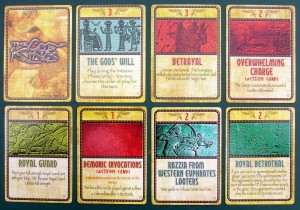 You always have seven cards in your hand at the start of each round. Which means a lot of choices.

I have to admit that the way I learned this game was by taking little baby steps. I held a siege. I moved an army. I watched what happened when I tried to use a neutral army to help me. And, nasty me, I used an action card to stop that activation.

So many choices. So many cards. So many options to explore on the colorful board of the ancient world around the Mediterranean Sea.

Control of the situation can be elusive. You have to plan for the long haul, and be able to survive a strike against you at every turn. You can even seem all-powerful and almost lose it all. It’s a challenge, and it’s never boring.

Just remember, no one ever said it was easy  being a God King.