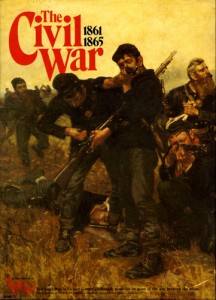 In 1983, Victory Games published The Civil War, one of the classic games to cover the entire American Civil War.  A small group of people have continued to play this game and improve upon it over the following years.  After several years of playing For the People, the GMT Games title that is based on this classic, I have decided to return to this game and see if I can relive those times 25 years ago when I had so much fun playing this game.  The first thing I will have to do is ‘unlearn’ some the strategies and tactics of For the People, since there are significant differences in how the games play. 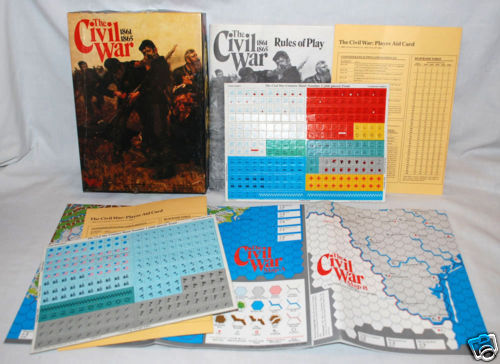 The area of operations for the standard game of The Civil War is divided into three (3) theaters.  The East includes the states between the Atlantic coast and the Allegheny mountains to include the Carolinas, the West encompasses the states between the mountains and the Mississippi river to include Georgia and Florida and the Trans-Mississippi theater consists of the states West of the Mississippi river.  There is an optional 2nd map that extends westward all the way to New Mexico.  I will not discussing that.  Each turn the players will designate one of these three theaters as primary, one as secondary and one as tertiary.  Command Points are assigned to each theater based on these established priorities.  There are also a small number of “Discretionary” CPs that may be spent in any theater and the USA (only) receives Naval CPs for activating naval units and leaders.  Both players will use these command points to move units and leaders, construct fortifications, conduct naval operations and all the other military operations the war required.

The standard game runs 19 turns, with each turn representing 2 months with a winter turn 4 months.  Five (5) turns for a year. Each side has a fixed reinforcement schedule that supplies Strength Points (SPs) at an historical rate.  The USA will start with 37 SPs on the board and receive 159 SPs as reinforcements during the course of the game.  The CSA will start with 25 SPs and receive 132 SPs as reinforcements.  This 39 SP advantage to the USA (~25% more) is significant, but with the burden of attack on the USA they will need to employ them wisely. 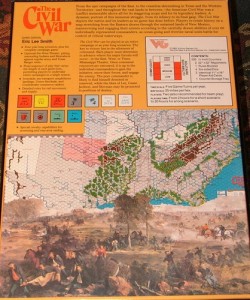 Both sides strive to accumulate Victory Points through military operations.  Most of the USA Victory Points will come from the occupation of cities in neutral and Confederate states.  Bonus Victory Points are awarded once all the VP cities in a state are in the possession of the USA at the end of a turn.  The Confederate side can secure some early Victory Points by controlling cities in the neutral states, but the superior resources of the USA will eventually convert the neutral states to the USA cause.  The Confederate player also gains VPs each time the Command Point Table is used to grant both sides command points and for raiding USA merchant shipping.  There are significant Victory Points awarded for the CSA capture of Washington DC which could lead to an early CSA victory, but this will rarely occur with reasonable USA play.  Defending the capital is the highest priority for the USA player the first few turns.

Overall Strategy for each side. 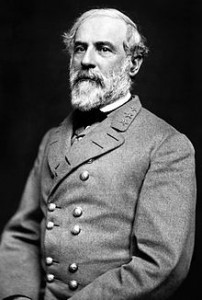 The top priority for the USA in the early game is to defend Washington DC.  Read rule 4.1.6 for the dire consequences of CSA control of your capitol.  The CSA could attempt this in the early turns, but this would consume a great deal of CSA resources early and is reasonably easy for the USA player to counter.  With that primary objective secure, the USA strategy is driven by the need to occupy all the VP cities in a state.  Neutral states will convert to USA friendly states and original confederate states will convert to neutral states.  This is done by a combination of sending armies south to convert the railroads and capture cities, using the rail network to provide supply and using ocean transports and ironclads to capture coastal cities.  The ground war in the west is facilitated by the USA riverine forces that can transport USA SPs deep into confederate territory and block confederate supply and force movement across the rivers.  As was historically true, the USA naval power starts weak, but by 1862 (turn 4) grows strong enough for significant combined land/naval operations. 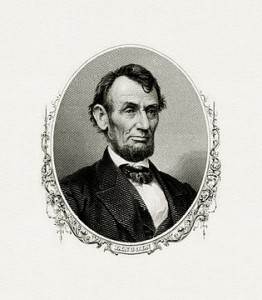 As the game opens the Confederate player is in a position to contest Missouri and, perhaps, West Virginia.  The USA starts in control of all the VP cities in West Virginia except Grafton, which usually goes to the side that wins the first initiative roll.  The supply situation in both states is tenuous for the CSA, so he will need to carefully consider how long he wants to contest those areas.  During the first couple of years of the war the USA enjoys a very slight advantage in terms of reinforcements and Command Point usage.  As the game progresses into 1864 (turn 14) the Confederate cause begins to run out of reinforcements and the Blockade reduces imports by 30%.  If the USA has taken more than just a few ports, this loss of supply points will lead to increase costs in Command Points for many actions, eventually paralyzing CSA forces. 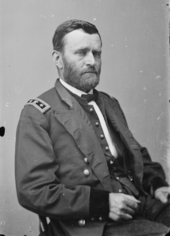 Ultimately, the CSA needs to preserve control of at least one VP city in each state to deny the bonus VPs to the USA player.  One way is to build a strongpoint defense at a key city in each state and keep a mobile force in the area threatening to retake any city the USA does not garrison properly. Unfortunately for the CSA, they cannot have a strong defense everywhere and control of the seas allows the USA to open new fronts along rivers and coastlines on a regular basis.  Creating and exploiting these opportunities is essential for successful USA play.  Learning how to prepare for this and deal with it is essential for successful CSA play.

Links and additional pages regarding Victory Games The Civil War