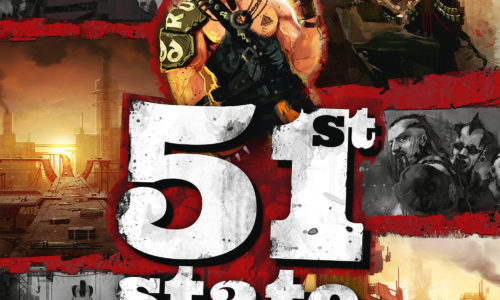 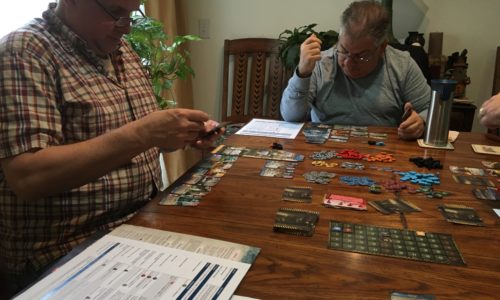 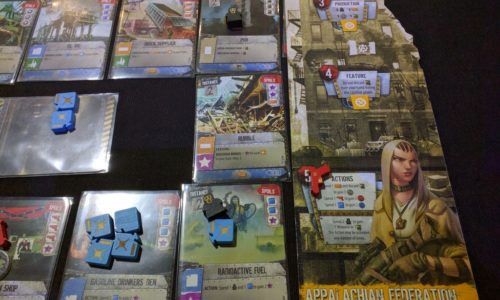 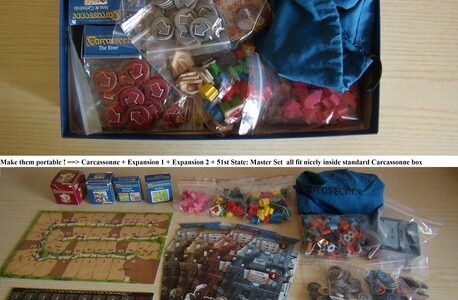 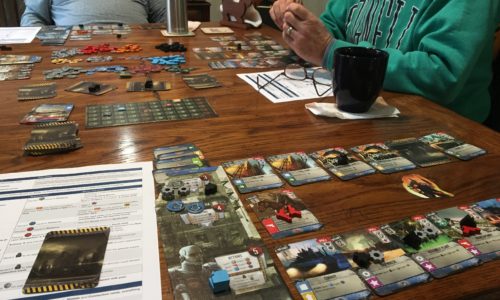 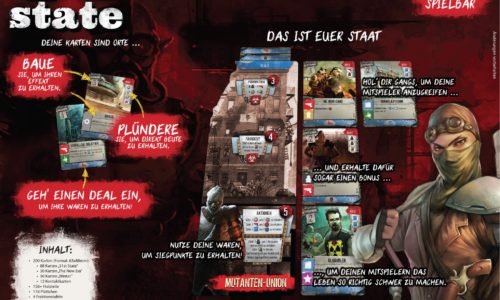 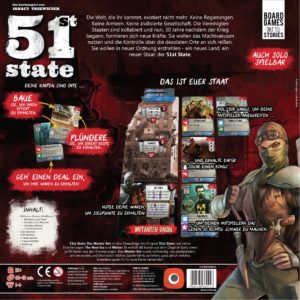 At its heart, 51st State-The Master Set is a card-building game set in a post-apocalyptic world which is, surprisingly, absolutely loaded with resources just waiting to be taken by the players sitting around the table.

No map, some simple-to-read boards giving slightly different special powers to each of its one-to-four factions and a remarkably easy set of rules.

But, make no mistake, there is so much to do in the fast-paced rounds that 51st State comes close to achieving that holy grail of gaming – making the players waiting for their turn watch every action, so there is no chance for boredom to ever set in.

It’s a clever part of the rules.

Every action taken by one player can open a door or close a door for everybody else. 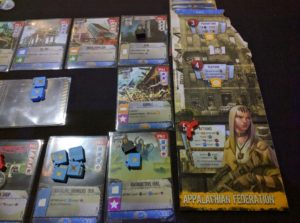 A well-rounded state in “51st State – The Master Set” – Wiki

Players all share a smorgasbord of markers set up between them in the common pile, and they have to decide which ones to take as opportunities change with every player’s move.

Why? Because all the players start with a handful of cards that can be used two different ways, and which are activated by those markers.

Put a card down one way and you get production to use every round for future builds. But, (if it allows open production) your opponents can also put a marker on it and share your production one time. Put it down the other way, and no one else can use it, but you produce less.

And you might really need a gas can or a pistol, or maybe a gear or a settler. And, you don’t produce it. But, someone else around the table might, and you can sometimes share that production. Unless another player beats you to it. Or you know it and steal the production before they get to it. You could also demolish that production facility and take the spoils (usually more than it produces in a single turn), If only you have those little red arrow markers. 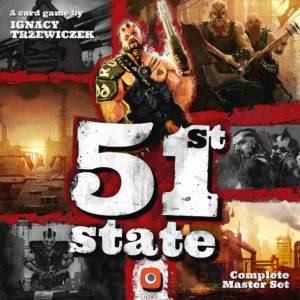 “51st State – The Master Set” front cover. This is the updated and expanded version of the original “51st State” game.

Every action that players take requires a separate marker, and players can use them in different ways, from trading in the resources they produce (they are refreshed each turn) to getting them by destroying production cards – their own or their opponents. Or, of course, poaching.

That’s why every player’s options will change with every turn. Like I said, 51st State-The Master Set doesn’t leave you much time to be bored.

The turns keep going around and around, with two strict limits. At some point, players will run out of cards to play or resources to activate. Sometimes, they will run out of both. Then they say “pass,” and the turn ends for them. The first player to pass gets to go first in the next round, cannot be attacked by any other player and can do nothing else but watch or go to the kitchen to get a cup of coffee.

It is, of course, also a strategic option. Every player knows what resources they get to build at the start of the next round, and they may not have the resources to build a card still in their hand.

So, besides going first, they get first pick of the new cards which are put out at the start of the next round

The downside is that once a player passes, any unused resources they have are lost. It can be a very a strategic decision. And, maybe, a very bad one, depending on what the other players can still do.

There are no fixed turns in 51st State, but there is a counter that shows every player’s victory points. The game ends with a final round once the first player gets 25 points. 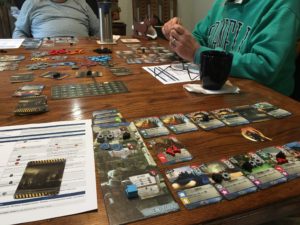 Play it a couple of times and you quickly realize that you can’t get everything. Go for production early and you fall behind in accumulating victory points. Go for victory points early and you will soon run out of resources. Go for destroying your opponent’s production to get more resources for yourself and you could find yourself becoming a target for revenge from some other players. But, only if you have the spoils they need.

It’s the kind of game where, halfway through playing it, you decide that you have missed some important production, or are making too many bricks that you don’t need. (There is no mechanism for trading). But, a new opportunity may be coming with every deal of new production cards.

Every time you play it, the options are different. There are so many cards to take – and the artwork is really good – you will rarely see the same ones twice. In the games I have played, we never got to the end of the deck to reshuffle the discards. 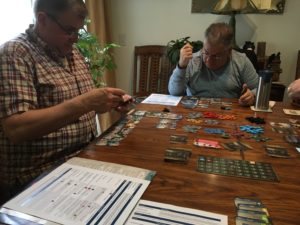 You can start 51st State: The master Set with a general strategic plan, but it will likely fall apart quickly as the deck is shuffled. You get your cards, start your production, and find the best thing you can do is use them in a way that doesn’t follow your plan.

Do you trade in your population for those little red arrows to grab some spoils, or the little grey arrows to let you build a warehouse? Do you want the blue arrows that let you make a deal and keep all your production without sharing it, or go for the trade that lets you get a gray gear, which you can trade for…well, it can get a little complicated really quickly.

But, that’s life in a post-apocalyptic world.