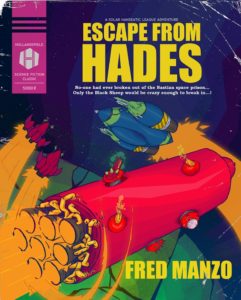 Herman and I and some of the usual bunch of people who test our games have been working on this project for over well over two years. So right along with discussing the effects of “double canister at ten yards,” or “how far cavalry can move dismounted,” or “do zombies fight better at night” we were thinking of the effects of having starships being able to retreat in the middle of a space battle. By the way, “Escape from Hades” does have a two-person coop version, although it will always be primarily a solitaire game. It is also a 3D game as battles occur in space, on the surface and “underground“ (actually within the prison ship), plus between space and the surface and from within the prison ship to its surface. So there will be plenty of tactical thinking required, but very little math. Basically, it’s a solitaire game patterned after those old 1940’s pulp fiction books and magazines. It’s from Hollandspiele and a boxed version will be released later this year. Hermann Luttmann is the developer and I’m the designer. Its theme is a desperate attempt to rescue a bunch of political prisoners from a prison spaceship before they are shipped off to the gladiatorial games.