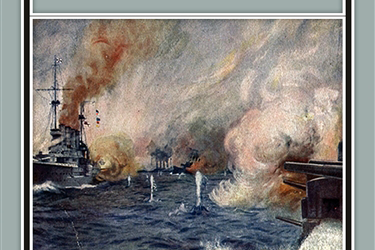 Coronel and the Falklands 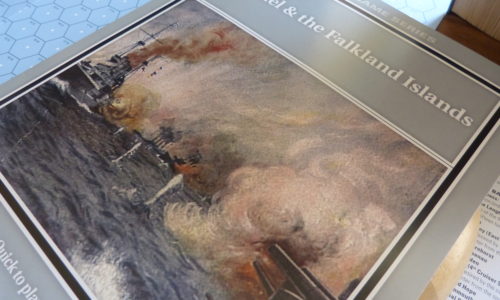 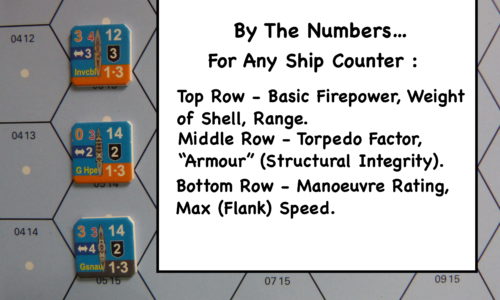 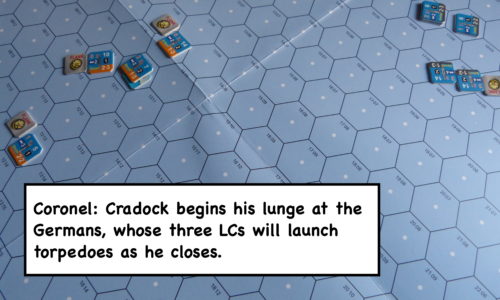 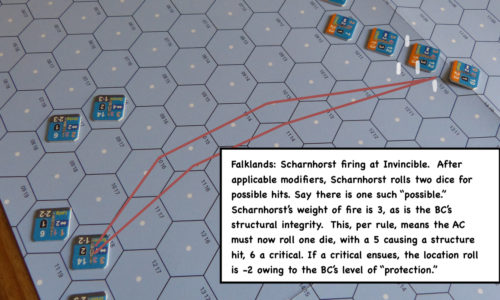 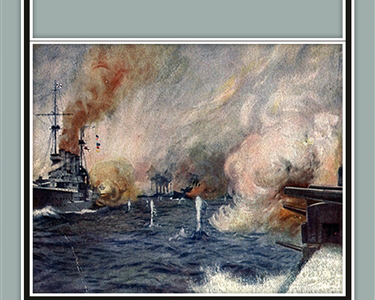 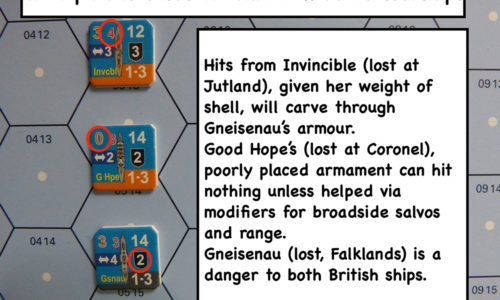 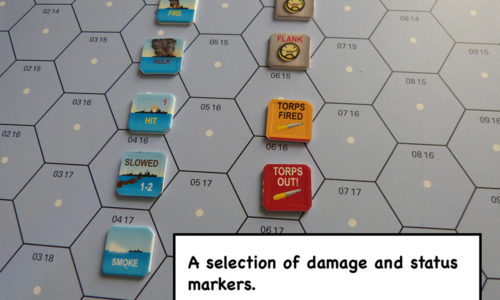 Three things often guaranteed to lure a designer into piling on the detail are warplanes, tanks, and fighting ships.   At times, it can all get a bit much – even if it is all a bit clever. 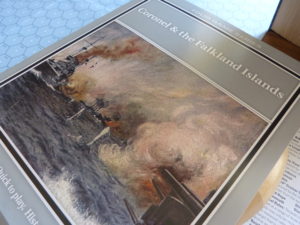 Coronel & the Falkland Islands is “a bit clever,” at least in my opinion, but it is also amazingly straightforward.  Using the same system as you will find in its sister game covering River Plate and the Denmark Strait, what you have here is a model you can grasp after a mere thirty minutes of reading, but will then present you with a valid depiction of naval combat across the period of the two world wars.

When I first looked through the rules and components to the WW1 offering, my initial thought was that this was going to be an uprated version of the old SPI classic, Dreadnought. Well, perhaps there is a small hint of Dreadnought here and there, but better acquaintance with the game leads me to believe this is a total original, full of clever modern touches and some rather slick design ideas.  Inevitably, given the short rules compared to the complexity that can be brought to bear in just about any naval subject, there are areas where a broader brush has been applied. But there really aren’t too many of those, and for the most part, the system gives you everything you could reasonably hope for in a folio design with a small footprint and a brief overall playing time. 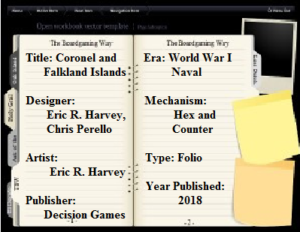 The game works at a scale of one nautical mile per hex and fifteen minutes per turn.  In combat situations, therefore, your dice rolls are going to represent a whole succession of salvoes for either side, while matching historical ship spacing to scale, you could easily fit four big-gun ships into each hex.  I rather suspect, however, that the model is never going to venture into engagements where the regulation of a whole fleet is going to be any part of proceedings.  This is a model for small battles – besides which, in historical settings, there are precious few big gun duels that either world conflict can offer up.  I do hope we’ll get some plausible “what-if’s” should the series continue – the pursuit of the Goeben being a pretty obvious example. In the meantime, in the context of the Great War, we have these two battles from 1914. 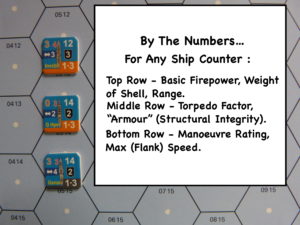 One other thing to note here is that, unlike Dreadnought, I suspect this model will steer clear of introducing destroyer flotillas and the like.  I could be wrong, but I think handling them would gum up a fun system – so if we also get Dogger Bank and/or Jutland’s “Run to The South,” I would not expect to see destroyers or torpedo boats racing around alongside the big boys.

Now, let’s take a look at the basics:

The sequence of play is fire, then move, then admin (try to put out fires, etc.)  The player designated as “first” will move a ship of their choice, and then alternate with their opponent.  All fire is simultaneous.  Ships can potentially move at cruise, standard, or flank speed.  Firing ships get an extra die if firing at cruise speed; they lose a die if firing whilst at flank speed.

As for combat, it might just be called a “buckets of dice” system, but we’d be talking about a very small bucket working with a very good system.  Ships “fire” as many dice as their firepower rating, with additions and subtractions for range, smoke, evasion, more than one ship firing on the same target, and certain scenario specific conditions – at Coronel, the Germans will benefit from the evening sun lighting up the British squadron, while at the Falklands the Germans are hampered by a shortage of shell after Coronel. 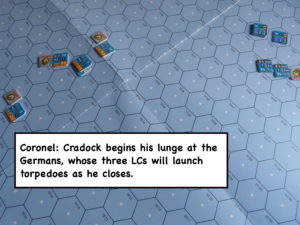 Not every possible condition is catered for, which is where the brush gets a little broader – no wind will blow thick smoke over the BC’s rangefinders at the Falklands, and rough seas only affect speed changes at Coronel.  Nevertheless, within the ambit of the game model, the results you get are entirely credible.  Ships will tend to degrade over a considerable period of game time, so no chewing up ships with exaggerated damage to make the situation fit the timescale.  Spectacular losses can always occur, but not that often – which is as it should be.

The basic combat procedure is:

Depending on ship size and its structure ratings, any vessel may have one side or two – flipped ships are not in a good way, and ratings will be reduced.  Exceeding whatever structural integrity they have left sinks ships.  Hulks (ships whose damage has equaled their total integrity rating) are ready to sink if they are more than sneezed at. 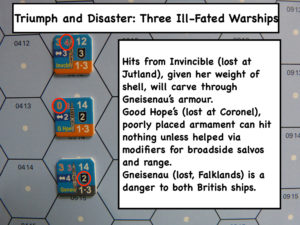 Torpedoes, in the WW1 settings at least, are all fine and dandy if they hit something, but the chances of that (owing to modifiers against likely die results) are not good unless you get in very close.  Essentially, torpedoes work just like shellfire in the context of the game system, save that a ship’s structural integrity will do nothing in itself to keep a hit out or prevent the nasty things happening on the critical list.  Given the timescale, torpedoes also hit or miss the turn they are launched, so no moving counters or secretly tracking where they have got to.

Before writing this review I both pushed some counters around and then played full games of both included scenarios.  I would stress again that the game seems beautifully paced. My Coronel scenario went the full course, with the British squadron slowly and valiantly diminishing as Admiral “Kit” Cradock tried to get some hits on something German. In that he succeeded, as one of the German AC’s was slowed by a critical hit, which, in this game world context, might well doom it subsequently to a permanent neutral internment. One of the German LC’s was also hit, but without impairing systems onboard. As for Cradock’s squadron, only Good Hope, the flagship, was left by the end of the action, and that in not much condition worth speaking about. But the thing is, it took time. There were plenty of possible hits, followed by confirmation of nothing more than making the deck wet or putting another hole in a funnel. 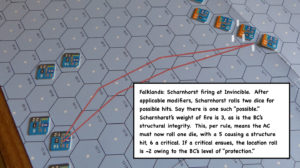 The Falklands was very different. Early on, Invincible got another “possible” on Scharnhorst; a critical hit was then confirmed; and with the full table open owing to the BC’s 12” guns against the AC’s armour, that critical turned out to be a devastating hit that undoubtedly detonated something deep down that should have been kept very undetonated. Soon afterward, the already burning Gneisenau was demolished. Next time, however, given the realities of the system, I might well only hit the water most of the time.

Now, such as they are, let’s address the few negatives.

First, a few of the rules are a sentence or two short of clarity. None of these instances will spoil or halt the game, but they are things that needed a bit more attention. For example, ships are penalized for firing while at flank speed – which is the maximum speed printed on the counter. The problem is, the twin German AC’s have different maximum printed speeds – perhaps engines were playing up or there were other issues. But the thing is, if the rule is read literally, both of these identical ships will be penalized for moving at a different top speed.  Commonsense tells me there is no flank penalty for a ship going slower than its sister, but that is not expressly stated, and nor is the difference in speed explained.

As for vagaries in the torpedo rules, they did get a bit of help via an entry in Consimworld, but again, they only really needed one more sentence to be right in the first instance.

I also have a slight issue with the Falklands scenario. The ships are in the right starting place, but the Germans can get a form of victory for doing something they had no immediate intention of doing in the actual battle – flee north. In actual fact, historically they fled south. I get the impression the Falklands scenario has been somewhat geared to bring about a “proper” battle rather than ten turns (pretty short for this) of the Germans largely scarpering about and looking for a bank of mist or other bad weather to disappear into.

But, at least for me, this is small stuff.  If I were judging this design purely on its merits as a model for naval combat of the period, I would have to say it’s very good…bloody good in fact.  The results of both my battles fell within reasonable historical parameters, and I think it would be somewhat petty to make big issues out of small flaws. 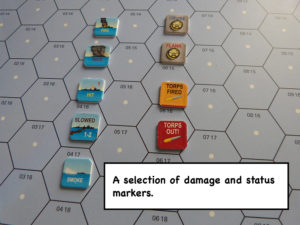 Which leaves me wondering if we will get something else down the line?  The two failed attempts to engage the Goeben in August 1914 make one attractive proposition, while I think Dogger Bank would be about as big as the model could handle and still work.

But irrespective of whether we do get more of this series, or what we presently have turns out to be all we are going to get, this design should remain as one of those object lessons as to how you can achieve very worthy things with just a few well-considered mechanisms and all the numbers in the right place.

Well worth a look.

Coronel and the Falklands BGG Page:

Coronel and the Falklands Home Page: