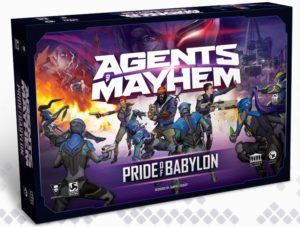 “Though better known for military and historical titles, Academy Games has launched a new imprint for science fiction and fantasy based games.  The new line, called Apollo Games, will begin with Agents of Mayhem:  Pride of Babylon, based on the new Agents of Mayhem video game from Volition and Deep Silver.Apollo Games will be a new division within Academy Games.  According to company founder Uwe Eickert, the new division is a result of two years of development within the company, which was initiated when Deep Silver and Volition approached Academy Games with the idea of creating board games based on their video games….”