Warning: This Game Is Addictive!

Playing the Grand Battle scenario of “Longstreet Attacks,” one finds the action swinging all over the map and therefore writing a short AAR is difficult. My playthrough had one area with constant action and that was Little Round Top (LRT) so I will focus on that portion of the game. 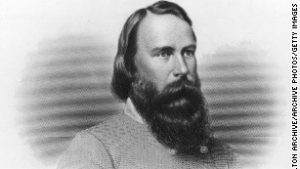 On the first chit pull of turn #1, Hood sent Law’s brigade bursting out of the gates. Chit pull #5 was the Longstreet “Commander-in-Chief” and that was followed by the “CSA Brigade Reserve Movement” which kept Law racing along like the Union forces couldn’t see him. One Union skirmisher unit was in Law’s way but they retreated northwards towards Sickles lines, not east towards LRT. This “safe” move allowed Law to rush on-wards unimpeded. To make things worse, the Union forces didn’t pull the “Rebel Fatigue” chit until after Law had finished his sprint for this turn. Hood also sent Robertson tagging along in support but Law was racing away from him too. Barnes got alerted to the danger at the end of turn #1 so he sent Vincent for LRT but it might be too late. It looked like the first side to get their chit pull in turn #2 would reach LRT first and start climbing that hill.

Turn #2 started and the CSA still had the luck of the draw on its side. Draw #3 was Longstreet’s CIC chit and Hood activated Law two draws later. Law started his climb and Vincent fell further behind. Draw #8 was the “CSA Brigade Reserve Movement” and Law was now one hex away from the crest of LRT. Late in the turn, both Barnes and Sickles activated Vincent, which sent him up the north slope of LRT. A “Rebel Yell” chit caused the first fire combat on LRT as the 20th ME’s defensive fire stopped a charge by the 44th AL. It looked like the first real combat would occur on the top of LRT. 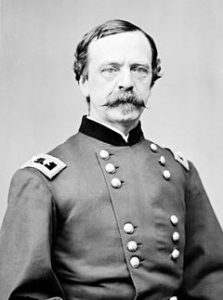 The first pull of turn #3 was Barnes (finally some Union luck) and he sent Vincent charging into Law’s men. Defensive fire depleted the 44th NY, the 83rd PA and 48th AL depleted each other. The 20th ME fought its way to its historic spot on LRT by forcing a close combat retreat on the 44th AL. On chit pull #3, Sickles is drawn and he decides to pull Vincent’s depleted brigade back one hex, which left the 20th ME alone at its historical hex. Yet another reason why Dan doesn’t have a monument at Gettysburg!

Turn #3 is still not over and 16 chit draws later, Hood finally sent Law moving so the 4th/44th/47th AL all hit the 20th ME. The hilltop position helped Chamberlain’s men but the odds were still 2-1 in Law’s favor. A horrible combat roll of “13” followed by a poor cohesion roll of “3-1” forced the lead CSA regiment back. The 20th ME held its position! But wait, the Longstreet “CIC” chit is pulled three draws later and so Law goes back up that hill. In a real twist, the battleworn (half strength) 48th AL snuck up the west slope of LRT and ended up between the 20th ME and Vincent’s other units. Outnumbered 2-1, the 48th AL got two great rolls and took the center of LRT. The 20th ME now has four of its 6 surrounding hexes full of CSA troops and things don’t go well. The 20th ME was depleted in close combat, survived opportunity fire while it retreated and tumbled down the east side of LRT. Yes Union troops were racing for LRT and the remnants of Vincent’s brigade were clinging to the northern slope of the hill but the Rebels held LRT…..for now! Oh, by the way, the “Fog of War” chit was pulled in turn #4 and Hood got shot.

At the start of turn #5, Sickles sent Weed’s brigade up the north slope of LRT to help Vincent. Six chit draws later, the “Fog of War” chit caused a “wayward CSA Move” and the battleworn 48th AL retreated from the crest of LRT and left the 44th AL alone up there. Four chit draws later, Law sent himself (and his men) over the hill. They hit the 3rd US Regulars, depleted them, caused a two hex retreat and a panic among some of the Union forces. The CSA had LRT back under their full control but Harrow’s Brigade has just come up behind Weed. 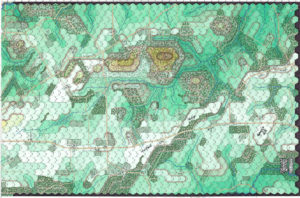 The “Longstreet Attacks” map (click to enlarge) covers the southern portion of the battlefield. Revolution Games will publish “Longstreet Attacks” sometime in 1Q18. Its designer is Hermann Luttmann, I’m its developer and Rick Barber is its artist. It is the third game published in the “Blind Sword” series. The first two are “Stonewall’s Sword: The Battle of Cedar Mountain” (BGG rating 8.2) and “Thunder in the Ozarks: The Battle of Pea Ridge (BGG rating 8.1).” – Fred

On turn #6, Ayres sent Weed up the north slope and Law’s men are fighting for dear life again. The battleworn 48th AL finally breaks and the battleworn 44th AL retreats one hex. Law was in trouble again. In desperation, Law ordered Robertson to rebuild the 3rd AR/4th TX and they were now ready at the south base of LRT. Law then sent his own weakened men against Weed and Day. The 6th US Regulars got depleted and the 91st PA/140th NY retreated two hexes but some horrible rolling (an especially bad cohesion roll of “1-1”) forced Law’s other regiments to retreat. Law’s battleworn units now only held the 20th ME’s historic hex and the south face of LRT. Is Robertson enough help and can he come up in time? No, McLaws thought not and so he sent 3 of Kershaw’s regiments to help out at LRT.

Fast forward to turn #9, the “CSA Rally ‘Round The Flag” rebuilt the 15th/44th AL so its fighting time again. Unfortunately, the Union troops have been rebuilding too so Crawford sends Fisher’s brigade up the east slope of LRT (yes, yet another US divisional attack wave). Though Fisher had low-value attacks, he got good combat rolls and great cohesion rolls. The Union took both victory hexes on LRT back from the Rebels. With Burbank sent to the north base of LRT, the CSA had a crisis on its hands and LRT has changed hands four times (take that Wheatfield)!

With a crisis at hand, Law decided to rebuild his forces on the south slope of LRT and then a piercing scream was heard coming from the CSA rear lines. Is it Kershaw’s men giving the “Rebel Yell” as they come forward? No, an enraged General Hood had taken morphine, heard what Law had been doing and he alone was racing towards LRT! Yes, the “Fog of War” chit had revived him. Was it too late or was he too drug-addled to make a difference? (Hood made 95% of his command rolls while Law only made 55% so one could see why Hood was angry.)

Hood dragoons Kershaw’s three regiments along the way, threatened to shoot Robertson’s two regiments at the base of LRT if they didn’t follow him and up the hill, they go. In the fading light on that smoke shrouded hill, the final act was played out. Just to make it more fun, the “Lull In the Battle” chit was in the chit cup and so the ability to charge the enemy could end at any time. 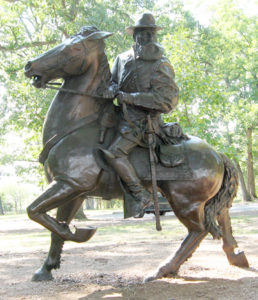 Day was not frozen in fear though and he had his men mount a counter-attack that went up the southeast face of LRT and snuck down the valley between Little Round Top and Big Round Top. Robertson and Law’s men had to turn southwards and blunt that threat so suddenly Kershaw’s split brigade came into play all by itself. The 17th US regulars had taken the southernmost victory hex on the hill and the “Lull ” chit was in play. Only “limited activations” were allowed for Kershaw’s troops so they could only conduct fire combat (no charging). Their blazing volley forced the 17th US to retreat two hexes though and all Union units were off the crest of LRT. Due to the “Lull” chit though, the CSA couldn’t advance to claim that victory point hex. So after changing hands four times during the game, both sides claimed one victory hex for Little Round Top at the end of the scenario. (Overall, the game ended is a 6 point minor victory for the CSA and looking at the map, that was a believable result.)

As night fell on Little Round Top, General Hood turned to Longstreet and said, “Well sir, we did it. Thanks to God and that medicine Dr. Franklin from Tennessee gave me, I was able to return and lead these men on to victory.” And the rest is history………….