American Airlines at its Finest 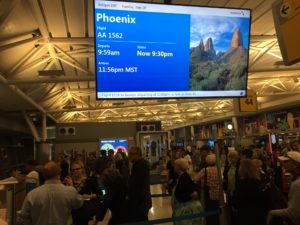 Note the Depart time and the Status time carefully. As Tim Allen, the artist, said AM PM what’s the big deal? They are only different by one letter. Click to enlarge.

I’ll have a full report on Consimworld Expo at Tempe in a few days, but I just had to get the details of my trip off my chest. Basically, the only way the trip could have been any worse is if the plane had crashed. In fact, it was so disorganized that it had me wondering about the competence of American Airlines.

First, we were scheduled to take off from JFK in New York at 9:59 AM (keep that time in mind as I give you the very short version of what happened) on a direct flight to Phoenix, Arizona. Of course, as 9:59 AM came around the flight was delayed. But that happens and is no big deal. We then were told American Airlines needed a new plane, but there was one across the city in LaGuardia and it would be shuttled over in a few minutes. Then we were told they were short crew members. Then there was only one more crew member to find. Then we were given a free lunch of cold cuts, fruit and soda, which was very nice seeing that we were one and a half hours late. Then were were told the plane from LaGuardia was having mechanical problems and couldn’t get to JFK. That’s two planes and two crews. Then we were told we had to wait for a plane to come in from Phoenix ! Yes, Phoenix the city I was trying to get to. That made the take-off no earlier than 5:00 PM or 7 hours late. Then we were given a $12 voucher and told to have dinner. Once the plane from Phoenix came into New York City we were told it would only be a short wait while they re-provisioned the plane. Then we were told that we could enter the plane. Then we were told that all we needed was a load of ice and orange juice and we’d be off. Then we waited some more. Then the captain came on the intercom and told us to get off the plane because the crew had “timed out” and it was against FAA regulations to leave JFK. Then we were back to looking for a new crew for the plane. I was told there was suppose to be 4 back-up crews on stand-by in NYC but there had only been two and apparently that wasn’t enough. Then we were loaded on the plane again. That would be crew number 4, involving three planes and 2 loadings. Then the captain announced that if we don’t take-off in one hour his crew would also “time-out.” Then we waited on the runway for permission to take off. Fortunately the plane took off without the need to unload the plane a second time and round up a 5th crew. We were 12 hours late getting out of New York around 10:00 PM. I never realized orange juice was such an important component in the operation of American Airlines. Next time I’m taking a wagon train to Tempe.

So now we finally get to Tempe around 1:00 AM (local time, the next day) and I took a cab to the Tempe Mission Palms. Of course, the rest of the story doesn’t have anything to do with American Airlines, but it’s all of a type. Once I got to the Tempe Mission Palms a guy runs out of the lobby (this was in the middle of the night) and told me by name not to get out of the cab because there had been an “incident” and they could not allow me to have a room. That would be a room I reserved 3 months ago by credit card and called about twice before arriving in their courtyard. (But who was I to interfere with a police investigation or perhaps a FBI crime scene?) Then I was told I had to go to a different hotel but they would pay for the cab and the new hotel. I later found out the “incident” actually was related to an insurance convention that had begun just before the Consimworld Expo and in which its members were having such a wonderful time they refused to leave when their time was up. This is called, in hotelize, an “under-departure” problem.

So I finally dropped into bed at 4:30 AM (New York time) the next day in a strange hotel, after a trip that in total ran from 7:00 AM on Tuesday when I left my house on Long Island to 4:30 AM on Wednesday in Tempe, Arizona. That’s a 21 hour + trip, counting travel, security, delays, flight time and a hotel mix-up.

In return I got a turkey sandwich, a banana, a can of soda and a $12 voucher and I had to pay for the plane trip.

But I’ve put in a request for a refund from American Airlines. I’ll keep you informed.

PS: I guess things could have been worse. I just found out that someone took an American Airlines flight out of JFK 2 days after I did. They had a 10 hour delay AND their plane was finally cancelled on them.