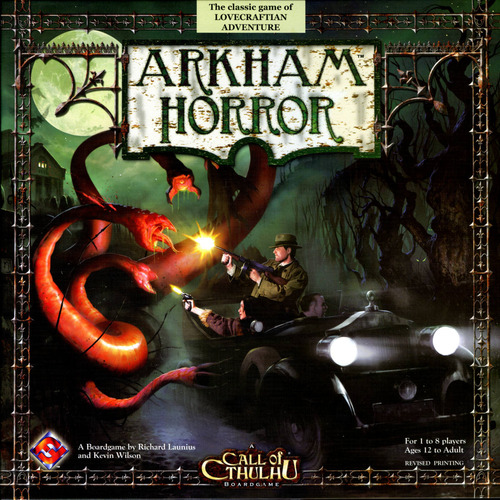 Arkham Horror is a boardgaming extravaganza published by Fantasy Flight back in 2005. Designed by Richard Launius and Kevin Wilson, it is based on H.P. Lovecraft’s Cthulhu works and is extremely theme heavy. In any event, it’s a role playing, monster fighting game, in which the various protagonists must work together in order to defeat the system and save their town from other-dimensional horrors. Playing the Game The playing area is a map of Arkham, the home of Miskatonic University. In addition there are spaces on the map representing its general store, boarding house, church, magic shop, woods, town hall, docks, rail yard etc. In all, I’d say there are about 12 or so locations, many of which can open a gate to another universe that spawn monsters at random. If too many of these portals and monsters appear simultaneously the raucous awakens an Ancient One and the players must then battle one last boss monster in order to win the game.

Every player takes on the personality of a town resident, all with their own level of sanity, stamina,   skills, spells and weapons. In theory, these people should all be working together to defeat the evil     denizens of their city and close all these gates. But in practice, they are lucky to find themselves in     the same universe at the same time. In all there is room for up to 6 players but I’d say 3 to 4 is the      best fit. Although it is more likely bigger groups will have a better chance of succeeding, with 6            players the downtime might become mind numbing as there just isn’t that much player interaction    to liven things up between player turns. Now, I’ve only played this game three times (that is, we      used the basic game with one expansion) so I’m far from  being an expert but I’ve certainly got to say it seems to be a heavily luck based game. Whatever you want to do, there is usually two or three other things you’ve got to do first. And when you try to do those things you are interrupted by two or three others things you’ve got to do instead, ad infinitum, so that the typical game consists of you wandering around a monster infested town looking for generic “clue” tokens. Even simply crossing the town is a major undertaking that you will, in all probability, never accomplish.

Why there are even expansions to this game is beyond me as the basic version gives you 4 dozen different things to do on its own, so why pay money to be able to do 8 dozen different random things in a game that you’ll be lucky to accomplish 3? But there are expansions galore, so who am I to complain? 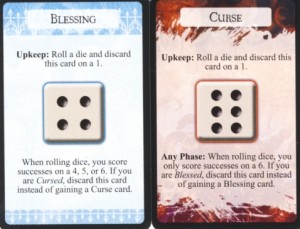 By the way, all these random events are generated by a good ten or twelve different mini-card decks that taken altogether make up your very own horror story. But, regrettably, it’s always the same horror story, which goes something like this:

“One day while I was visiting city hall in order to find a clue, a portal to another universe opened in front of me and a goblin popped out. I tried to run away but somehow ended up in another universe anyway. I wandered around there for a couple of days and then dropped back into Arkham, much the worse for wear as my sanity had dropped two levels in the interim. In any event, I decided to go to the nearby general store in order to get some supplies. But on the way I was attacked by a flying lizard with bad breath. Fortunately, I always carry an anti-bad breath card so I survived this attack but just then another portal open up, which, when I tried to close it, threw me into one more universe, although this time I had a knife. Unfortunately, knives were worthless in this universe, so I …”

I’ve no idea how long a game takes as we’ve never finished one. But I’d say well over 4 hours? To really love this game (and there are many, many people who do) you’ve got to really love Lovecraft… …and you don’t have to mind seeing your original plans fail and then seeing your plan “B” “C” and “D” also go awry. I guess what I’m saying is that this is not a game for those who like to make strategic plans and see them come to fruition. It’s more for those who like to survive in a chaotic universe.