I stepped into the unknown, and it was fun. 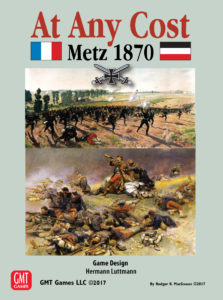 Not many people know the Franco Prussian war. A war looked back upon as one of the key events in European history. The combatants were different in their command systems and in their weapons. Think Prussian Krupp artillery and the French Mitrailleuse.

The problem of modeling asymmetrical warfare for the gaming table is among the hardest tasks any game designer can ever undertake. It requires a deep and detailed knowledge of the weapons, tactics and the historical outcome produced when all those ingredients were combined on the battlefield. In At Any Cost: Metz 1870, Hermann Luttmann brings his blind chit draw system to new levels of utilitarian greatness. Note, I purposely avoided the word complexity. The connotation of the word “Complex” is scary. Do not be afraid. The system is intricate but in a way that brilliantly achieves the purpose of modeling this era of warfare on the gaming table. The natural feel and flow of the rules allow you to easily learn and adjust to the different game design approaches taken in this game. More on this later.

The game scale is grand tactical with most unit counters representing brigades. One game turn represents approximately 1 hour for daytime and scales up to 3 hours for night turns. The hex grid is 500 yards across each hex. The game components are typical of the high quality produced by GMT. The illustrations and organization of the rules and player aid cards are excellent. The rulebook is clearly written and obviously well combed for error catching. The counters are clearly laid out and printed. The Map, there is only one, is nicely printed and terrain features are easily discernible. Note, all scenarios are played on the one map. Some scenarios only use a portion of the map and players need to keep the scenario specific boundaries in mind as the game proceeds. 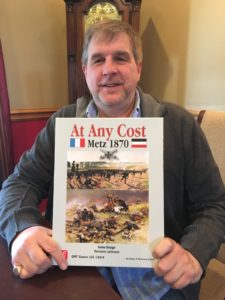 At Any Cost: Metz 1870, will take you a good amount of time to play through your first few game-turns,  due to the unique and innovative systems employed. The initial learning curve may be slightly longer than for an ordinary game, but not more difficult, and this is not an ordinary game by any means. At the end of the rulebook, you will find a section titled, COMPREHENSIVE EXAMPLE OF PLAY. I found this detailed run-through of one, mid-scenario, game-turn to be immensely helpful.

Initiative is a chit pull system. You never know what side or what corp will move next. Add to this the inclusion of Random Events chits in your draw cup mixed in with the activation chits. Then add Fortunes of War chits into the possible draws from the cup and you have brought the chaos of war to the game table.

Remember that in 1870, field army communications were still courier based. Large-scale coordinated attacks are very difficult to execute. While playing this game I quickly learned that Corp Commanders became the focal point of my battlefield planning.

When you pull an activation chit for one of your corps, the first thing you are going to decide is the posture for the activating Headquarters. Will the HQ be aggressive or will it assume a defensive posture? As commander, you must weigh the tactical situation at hand because the choice of posture determines which actions the corp can take, and what actions are prohibited by that posture. Each posture has its benefits and restrictions. This applies to all units of that corp within command radius. 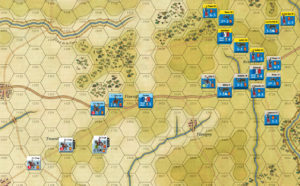 When you close with the enemy and combat begins you will see that there are two different Combat Results Tables used in the game. One for Fire Combat, and the other for when a unit is Assaulting. With this use of two different charts, the game does an excellent job of demonstrating that most fire combat results in morale and cohesiveness effects, with Assaults being generally more lethal.

In conclusion, it is my opinion that, with the release of At any Cost: Metz 1870, Hermann Luttmann has carved his name among the stellar game designers of our time. I consider At Any Cost: Metz 1870 to be the best game on the market covering the Franco-Prussian war and I recommend adding it to your conflict simulation gaming collection.

At Any Cost: Metz 1870 Errata, Clarifications and FAQ