This is just a quick end of year newsgram to fill everybody in on what’s happening here at Against the Odds, plus mention a special offer for something “nautical, but nice” in effect through the end of year. More on that later in this note.

We’ve learned that our commentator John Prados is holding a contest to solicit your favorite stories about game designers. They may concern casual gaming, playtesting, personal encounters, or any type of game show. The stories that best supplement his own recollections of these characters will be incorporated in a series of occasional “Simulation Corner” columns in the magazine Against the Odds. Stories may also appear in posts on his website. The best story will be rewarded by a free ATO game of his design sent to you, the exact title depending on what he has available and the winner and he agree upon. John says he shall endeavor to get you the game you desire by Christmas. Enter by going to John’s website, www.johnprados.com and going to the “Comment” feature, and leaving a message. Only one entry per message, please. Your entry will constitute permission to quote from your account for publication purposes. John shall be the sole judge of the best story entries. All entries must be received by 11:59 PM on December 15, 2014. The winner will be announced on John’s website the following week. Enter early and often.

Our next release, Against the Odds #43, is beginning to go the printer. Inside this issue are TWO separate solitaire games in a package called Islands of the Damned.

The first game in the package, Given Up for Dead covers Wake Island and the second,Utmost Savagery takes on the less-known invasion of Peleliu. Designer Steven Cunliffe tackles both battles with innovative systems that challenges the player to mix boldness with good tactics. You must gain objectives but minimize casualties…as the historical commanders would have liked to do. Here’s a look at some of the counter art for this game: 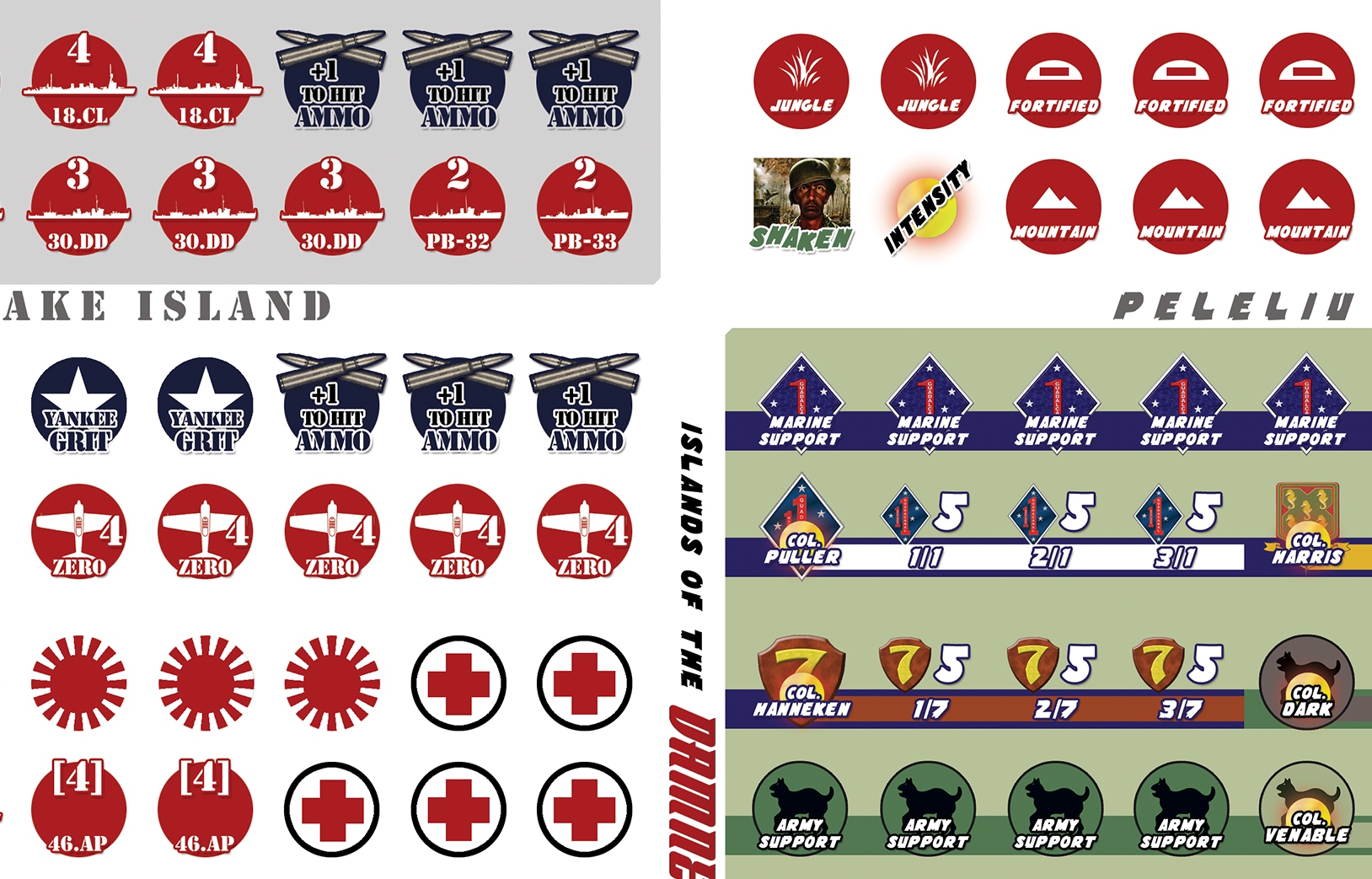 You will be commanding the invasion forces in each game, challenged with doing far better than the historical outcomes. Can you save most of your troops from the Islands of the Damned? You can read more about this issue here at our website.

…will actually be the set of four games from our sister division, Turning Point Simulations. Each of these features a hard mounted map, a small playing area (fits on a kitchen table!) and easy to play rules that get you up and gaming quickly. The four for this year are:

The Victory of Arminius: It was supposed to be easy. In 9 AD, when several days of battle were over, somewhere between 15-20,000 Roman soldiers were dead – three full legions had disappeared from the roles (and would not be reconstituted!). Roman retaliation would be terrible and prolonged, but the Empire never again tried to settle the land east of the Rhine. Find out what went wrong with this exciting game by John Prados.

The Battle of Hastings: Trial by bloody combat. While exactly where the line is on whether a battle merits the title “Decisive” may be uncertain, there is no doubt that the Battle of Hastings in 1066 AD deserves such treatment. Common perception is that a kingdom changed hands after a single day of battle. The truth is somewhat more complex. Discover it with this game by Lembit Tohver….

The Valmy Campaign: “Vive la Nation!” Of all the battles in our series “Twenty Decisive Battles,” possibly the least famous or obvious inclusion is Valmy in 1792 AD, usually prompting a “Say what?” But this battle simply “saved” the French Revolution! Find out how Rob Markham approached these events with his design….

The First Battle of the Marne: The casualties were simply staggering. In the history of the world, only one battle routinely has the word “miracle” attached to it. The Marne. Make that, “The Miracle of the Marne.” A battle so important it took two designers, Jon Compton & Lembit Tohver to capture it all…

Interested in one of more of the TPS game series? Check out the website here for more info.

And About That Special Offer

This end of year marks the 75th anniversary of the “Battle of River Platte,” which lead to the end of the German “pocket battleship” Graf Spee.

To commemorate the relentless Allied pursuit, the fateful battle, and final end of Graf Spee, now through the end of the year, you can revisit that campaign and explore some different outcomes with our great little gameThe Hunt for the Graf Spee.

We released The Hunt for Graf Spee as a bonus, mini-game in the ATO 2012 Annual, “Forlorn Hopes.”

It has not been available any other way — until now!

Make any purchase from ATO Magazine — that’s a new subscription, a renewal, a back issue, any of our special offers, or even a set of game boxes — and we’ll throw in a copy of The Hunt for Graf Spee with your order.

No codes needed. Nothing special to do. Order something now — we’ll add in The Hunt for Graf Spee.

And you can still pick up any of our Pocket battle Games on your way out of check out.

Maybe Operation Cerberus which depicts the escape of the German fleet up the English Channel in 1942. If the Graf Spee had escaped, it could have been part of the “Channel Dash.” You decide.

If you no longer wish to receive our newsletters, please reply to this email and ask to be removed from the mailing list.