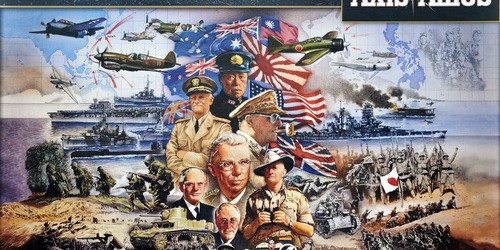 I like A&A in general and believe Axis & Allies Pacific: 1940 is a beautiful looking game with the potential to become the best A&A game published in years. But it’s not that now.

Basically, this version of the venerable A & A franchise seems to have fallen prey to the dreaded “Santa Claus Effect” as its strong points are overwhelmed by a tidal wave of mistakes caused by its apparent lack of play-testing. Play-testing that would have pushed its release beyond the 2009 holiday season and so was never done.

First of all, its published rules lack complete coverage of Neutral country interactions; this in a game that starts in 1940 when most countries were neutral. In fact, the game requires such extensive errata that it can’t be played right out of the box.

It has major historicity problems. For example, the Japanese Empire starts much too strong. Its initial air force is a sight to see, outnumbering the US, British, Australian, New Zealand and Chinese air forces COMBINED. And, remember, for the first three turns the American, British and Anzac forces are neutral and so they are out of the game.

The Chinese are too weak. In fact, they are so weak the Japanese can conquer just about all of China and India with little more than their starting units and less than a third of their initial air force. Furthermore, Japan actually gains economic strength from its mainland conquests as the war progresses.

The American navy and economy are under-powered. After all, the US produces only 17 IPCs per turn until the war starts and so can NEVER overwhelm the Japanese economy. By the time the American economy reaches its peak, the Japanese have had time to conquer most of China, the East Indies and their national objectives, bulking up their economic muscle virtually to U.S. levels.

But even beyond these problems, Axis & Allies Pacific: 1940 is seriously unbalanced. In fact, the Japanese start so strong that if they wish they can temporarily ignore the Philippines’ garrison and their own national objectives, take half of their naval and air forces to Hawaii and the central Pacific and just anchor off Pearl Harbor until the best possible time to strike arrives. Remember, when and where to start the war is THE major Japanese advantage and even lurking off a neutral’s defended coast is allowed.

For example, if the U.S. builds a fleet in San Francisco, the Japanese will attack it at the last possible moment. They wait because the longer they wait the longer the U.S. builds with only 17 IPC income per turn, while they build at 30 to 40 per turn. If the U.S. Navy runs for the South Pacific the Japanese may follow. And with Hawaii in his grasp the Japanese player wins if he conquers just Sydney and India. A prospect well within his reach. If the U.S. builds bombers, Japan ships in fighters, either on carriers or directly into Hawaii after an invasion. Further, as Japan starts with an over-abundance of fighters and TAC bombers, creating well-armed carrier task forces cost them, in game terms, only half as much as it does the U.S. player. (The U.S. player must build the carrier AND the 2 planes it carries. The Japanese player just builds the carrier and then flies in two surplus planes from his general reserve. Yes, he has that many extra planes.)

In any event, the U.S. player can’t build sufficient shipping to change the strategic situation until he has spent 100 IPCs. So, by the time the U.S. enters the war and defeats the Japanese Hawaiian fleet the game is over. Now, think about it from the U.S. players perspective: he just sat there for three hours saving money and then watched the game end. Boy, was that exciting! It just takes the U.S. too long to get into the game: three neutral turns, a war-economy bonus build, possibly another turn of builds to insure naval superiority and then two turns to get his super fleet into Japanese home waters. That’s way too long in a game that normally lasts about 6 turns anyway. Plus, a good Japanese player parks a suicide fleet off Hawaii to delay these actions even longer.

Of course, we haven’t yet discussed the game’s famous physical problems. While undoubtedly its map is beautiful, Axis &Allies Pacific: 1940 doesn’t come with paper money, its set-up charts have errors, its battle board is from the wrong version, its unit cost chart is shown only once in a multi-player game, it doesn’t have enough Japanese TAC bombers to simulate a Pacific island campaign and its production track can’t handle American or late war Japanese totals.

In fact, some of the game pieces leave you with the impression the publisher was more interested in saving a few cents worth of cardboard then in providing you with a superior $90 game!

All Is Not Lost…

Fortunately, this game is fixable and definitely worth fixing. Besides printing out the FAQ/errata sheets, I’d suggest trying any or all of the following:

Get your hands on an old Axis and Allies game. Any version will do. Then use the paper money it came with in place of the resource chart and its fighters in place of the TAC bombers that were “accidentally” left out. Also, use its antiaircraft and factory figures in place of the cardboard markers supplied.

Seriously consider balancing the game, either by cutting down the starting Japanese air force, for example by removing 3 fighters and 3 TAC bombers from the initial forces in the Japanese Home islands or by adding 12 infantry units to the British army in India. While most people prefer adding forces to balance a game, in my opinion Japan simply shouldn’t have the luxury of building a general reserve of 5 fighters and 5 TAC bombers at a super base in the central Pacific.

Eliminate the “no defensive sortie” rule for fighters based on non-islands, which I’ve never understood anyway. What, the defender won’t have thought of placing air force bases near naval bases?

Strengthen the Chinese or at least require the Japanese to garrison each Chinese province it controls. This in itself will be a significant drain on Japanese player’s resources as permitting him to own empty provinces lets him get the most out of his land forces.

Do not allow fleets to anchor for years at a time in the open ocean or off coasts they do not control. That is, fleets may remain in place only if they control an adjacent coast or island. Perhaps also insist that fleets can only leave from or return to friendly naval bases when they move. In any event, seriously consider a change that forces players to invade at least a few islands in some kind of an island-hopping strategy, which is what this game was presumably trying to simulate anyway.

Its initial fleet should be as strong as the Japanese High Seas fleet even if it is divided and its economy should automatically grow throughout the war. This adds tension and accuracy to the game as well as balance.

While this game does have major problems, I’ve found that if you put in the development time the publishers didn’t, you can end up with a playable game. All you have to decide is how much work you are willing to do, after paying $90 plus shipping and handling.