Axis and Allies Tactics – “The First Bite of the Apple” theory. 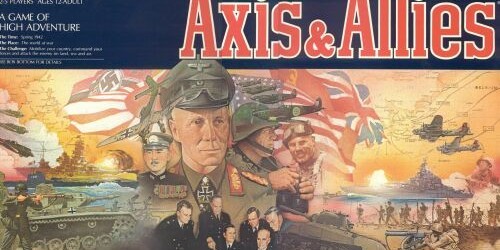 One other item worth mentioning for those playing >Axis and Allies is what has been called the “First Bite of the Apple” theory.

Basically, it says that no matter how accurate your formula, the entire situation will change when combat starts. Now, while this is true enough on its own, what the people who use the theory mean is that if we believe the situation will change in any direction when we contact the enemy, why can’t it sometimes change in our direction? And if so, why not give it a try no matter what the formula says?

For example: say we have the Russians attacking with 25 Infantry units against 15 German tanks. The Standard Formula says 25 x (1 + 1) or 50 divided by 15 X (3 + 1) or 60, which equals .83 (for tanks defending at 3). So the Russians normally won’t consider attacking. But all this formula, or any formula, is saying is what should happen, not what will happen. Or to put it another way, it’s only locating the central line of a bell shaped curve of all possible outcomes and telling us that in this particular situation there is such-and-such a probability of winning.

However, when we are rolling so few dice sharp variations can quickly change the situation. In other words, we may find ourselves with an outlier or low probability outcome. Therefore, in our situation, the Russian when rolling 25 dice might not hit the expected 4 times but an unusually lucky 7 times and the German defender might not hit the expected 7 times but an unusually unlucky 3 times. Well, the second round of combat will now be 22 Infantry vs. 8 Tanks. If we took the time to run the new numbers through the formula we’d get 1.375, which is substantially better than the original .83 and says the Russians will probably win. But we won’t have known about this outcome if we had gone along with what the formula originally told us. So, by robotically follow the formula, we gave up obtaining a low probability victory.

Players who use this approach would tell you “even though I know I’ll probably lose, that’s not a sure thing. Therefore, I’ll fight one round and see what develops. If the first bite of this apple is exceptionally favorable I’ll continue. Otherwise I’ll cut my losses and call the whole thing off.”