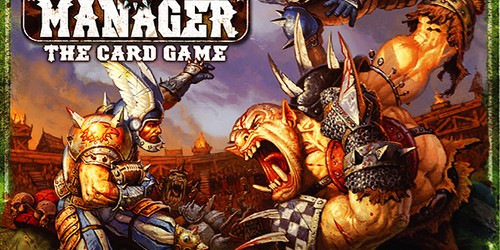 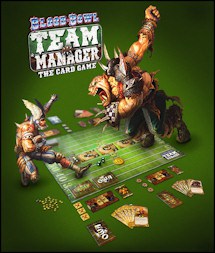 One evening last winter we played Blood Bowl: Team Manager – The Card Game. (That’s BB:TM-TCG for short, I suppose.) It was designed by Jason Little and published in 2011 by Fantasy Flight Games. Blood Bowl: Team Manager can accommodate from 2 to 4 players, each of which manages a different team in a “football” league. Though there is no board or field and the dice only have three symbols, representing a tackle, an injury or a missed tackle.

Now, while BB:TM is supposed to represent a tough American football league, in reality it has nothing to do with football. It could just as easily be said to involve a cartoon rugby league. In fact, any team sport with a ball and elbows would do.

As is obvious from its name this game is part of the famous “Blood Bowl” franchise, which has been around since 1986 and has spawned a dozen versions, expansions and add-ons. When it was originally published by Games Workshop it ostensibly dealt with a rough and tumble football match between a Human and an Orc team. 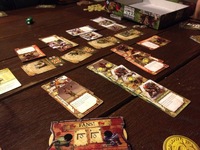 A Blood Bowl: Team Manager – The Card Game set out to play to the right. In this example, four weekly events are shown from left to right. They are the four cards perpendicular to the rest (in the center) and are called “Highlight Cards,” which the players fight over. Altogether, the four make up a Highlight Reel. Each Highlight consists of a match-up between any two teams, with the only restriction being a team can not play itself. The large rectangular piece in the lower center is a scoreboard and the circular piece in the lower right is the “Golden Coin,” which indicated who went first. Each end of the Highlight Reel contains a deck of card: one end holds the Spike! Magazine deck and the other the Highlight deck. Each team places their players on their own side of the 4 “weekly events.”

In this spin-off, however, each team is composed of either Chaos, Dwarf, Wood Elf, Human, Orc or Skaven players and each manager starts with his own basic deck of 12 cards, all of which represent average or below average athletes. He then shuffles this deck and gives himself 11 random players. This is his opening day team roster. From this basic deck he then deals himself a starting formation of 6 unknown players. These players are used in up to 4 contests and a tournament in one “week” of league play.

There is official cheating and injuring your opponent’s players is a valid tactic. (Think of this as a league made up of teams similar to the Eagles.)

Anyway, each player is rated for his power and special abilities. Whoever ends up with the most power, in any particular initial contest (or “Match-Up”), wins that event. The reward for winning events is that you get more fans, better players, upgraded facilities and a bigger staff, which will help you in the next “week” of league play. But increasing a team’s fan base is particularly important as whoever ends the 5 week season with the most fans wins the game.

Basically here we are talking about a trick taking, resource management, card game, with some humor and an awful lot of chaos. The art work and the card quality is fine, which is important as that’s just about all you get in the box, except for special dice, scoreboards and some tokens/chits.

Blood Bowl: Team Manager – The Card Game is a light, enjoyable game, with a bit of strategy (that may be overwhelmed by various layers of randomness, such as dice, cards, special abilities and official cheating).

This is not a collectable card game – a type of game I detest. Though, it does have a few of the characteristics of a deck building game. But that’s OK.

Now, we only ran through its four player version once and at least half of our time was spent figuring out how to play. So I’d guess the typical game lasts about an hour and a half to two hours. Although we really haven’t played BB:TM enough to be sure of anything much, we do known it’s strictly a Beer and Pretzels game, heavy on the beer. But as we did have fun, we all felt we’d give it another try.

I’d put Blood Bowl: Team Manager – The Card Game in the same category as Mag-Blast, but ever so slightly more serious. If you take it for what it is, you won’t be disappointed.