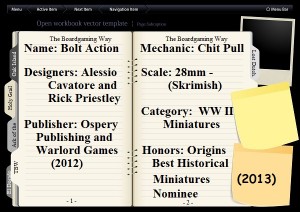 Bolt Action is a  set of World War II miniatures rules in the Flames of War tradition. Those familiar with the FoW franchise will immediately know what we are talking about. (E.G., one main book containing DRM and army lists, cost charts, weapons effectiveness charts and “make your own army” possibilities plus any number of expansion books).

As with “Flames of War” this approach has certain inherent advantages and  disadvantages.

Advantages: You end up with a fast, fun and fairly simple game. with its rules “all in one place” and with a streamlined action sequences. In particular, Bolt Actions Close Assault procedure is significantly simpler than FoW’s. For those looking for more game and less dice rolling this is the way to go.

Now, while the rules say they are for use with 28 mm models they can easily be used with other scales. At least, that is, until the ratio between the ranges involved and the scale used starts to raise questions about the ineffectiveness of your weapons. (I.E., until their effective ranges seem so short in comparison to the height of your units your troops appear to be armed with smoothbore muskets.)

Bolt Actions also includes an interesting “pin” sub-system. “Pins” act as a measure of a unit’s morale and units that fail their pin or morale test can not perform their orders. Plus the more pins a unit holds the less effective it will be on the attack. After all, if there are fewer soldiers firing their weapons due to morale problems within the unit it only stands to reason there should be less outgoing fire to intimidate or even damage opposing forces. 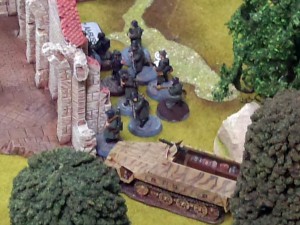 As for the book itself, the photos and illustrations supplied by Osprey are superior and, in fact, its overall physical quality is superb, even if the rules do have some errata. (In any event, I’d take the time to watch a video run through on Youtube or Boardgamegeek as that’s by far the quickest way to get up to speed.)

Disadvantages: Bolt Action’s noble goal of simplification may have been taken a step too far. For example, while the rules differentiate as much as possible within the context of a “D6” system, they do not cover grenades.

Though it may take you a while to figure this out as grenades are mentioned in the book now and then but they are not listed in the weapons chart players must use to equip their squads. Now, in our group this caused some confusion that was further compounded by the fact that the book lacks an index. But after asking around we were informed that grenades are “factored into the assault rules.” That is, the effects of Close Assaults are so bloody in this system because infantry squads are assumed to have all the grenades they need. (And this in a game that feels it’s necessary to make a distinctions between assault rifles and light machine guns.)

Like I said, there is no index and not a lot of cross-referencing included either. While in some books that’s not a big deal, Bolt Action is a book full of exceptions, most of which are spread  throughout 80+ pages of rules, so finding what you “sort of remember running across” can be a problem.

As for a weapon’s cost-benefit analysis, machine guns appear to be under powered, at least, compared to the fire-power of a full squad of riflemen. 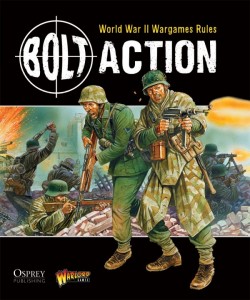 Basically, the game uses a modified “chit pull” system. With both players placing one chit or one special die of their faction’s color into a common bag for each unit under their control. When a correctly colored die is removes from the bag it may be assigned to any one of their units that doesn’t already have a die. Each new dice then allows a unit to perform one of 6 events. Or at least attempt to preform these events. That is because a unit has to pass an activation die roll, which involves taking into account leadership and the number of “pin ” markers the unit has accumulated, among other things.

The 6 possible orders you may give each of your units are:

Rally, which lets a unit remove some pin markers

Run, which allows units to double their speed, but not fire

Advance, that allows a unit to move and fire with a DRM.

Ambush, which allows a unit to hold its fire until a proper target presents itself.

Fire, that permits a unit to fire without a DRM, and

Down, which forbids a unit to move or fire, but produces a -1 DRM, making it harder to hit.

Units that have not been under fire start the game automatically obeying orders. As the game progresses, however, and they start receiving incoming fire each unit begins to accumulate “pin markers.” Normally, that’s one pin marker for each round of incoming fire. (For some reasons this incoming fire may cause any number of “Hits.” but as “Hits” almost never produce an equal number of casualties, I’d have used another term.) Once you determine the number of “Hits” your unit scored on the enemy you then roll to see what damage they inflicted, with a roll of 4, 5 or 6 causing an infantry causality. So on average only 50% of the “hits” will inflict a casualty.

Tanks, artillery and strafing are also worked in, but primarily this is a squad-centered game. Tanks, for example, are simply considered heavily armored infantry. So the same basic procedure is used to knock them out. That is,  after you pass your morale check, you give an order to fire or advance by placing a die with that order face up next to a unit. You then roll a D6 for each weapon firing and see if you scored a “Hit” – keeping in mind that a “hit” may still “miss.” However, as a medium tank, say, needs a 9 to “hit” it is obvious that a simple rifle squad cannot effect a tank with rifle fire produced by a D6. If, however, they have access to a weapon with a penetrating power, say a Bazooka, with a “PEN” of “5” then they’d succeed with a roll of a “4,” “5” or “6.” (That is, a PEN bonus of “5” plus a die roll of “4” produces a total of “9”, which is exactly what is needed to start inflicting damage to the tank.)

Now, unlike infantry, all tank damage is divided into three categories: those that cause superficial damage (they score the exact number needed to “hit” the tank), those that score from that level to 3 above it (scoring significant damage and rolling once on the Tank Damage Table), and those scoring more than 3 above the minimum needed and causing massive damage (and rolling twice on the Tank Damage Table).

And once you take into account a few more DRMs, that it.

Of course, I may be biased, considering that I help develop Hermann Luttmann’s Stonewall’s Sword and Hammerin Sickles games, but as far as “chit pull” systems go, I’d prefer something more along the lines of their Blind Swords system.

First, like most chit pull systems, in Bolt Action once a unit does something in a turn, it’s completely out of the game until the next turn. Of course, there is an “ambush” chit in Bolt Action, but it’s of only limited use as everyone always knows the ambushing unit’s position and the order it is operating under. So while you may have a unit set to “ambush” the enemy (actually it is an opportunity fire order) it’s a rare thing for it actually to “ambush” anyone.

After all, your opponent simply observes that one of your order cubes has, either, never been removed from the board from turn to turn (so that this unit has to be under “ambush” orders) or during a turn one unit received an order cube, but failed to do or even attempt to do, anything and so must also be under Ambush orders.This results in your opponent’s units simply walking around your ambushing unit’s line of fire in almost all cases.

The Blind Swords system, on the other hand, gets around this problem by allowing what might be called “half or limited activation” chits to be included in the mix. This way, while you may draw an activation chit or cube as normal, you are just as likely to draw “limited activation” chits that allow units to fire or to move or even to activate a second time. So while in Bolt Action (and Flames of War etc.) once a unit fires it can be safely ignored for the rest of a turn, in a Blind Swords system units that fired can just as easily fire again and possibly even move again. And they will, just when you least expect them to. Just as in real life.

Now, I realize that  Blind Swords is a wargame system and not a miniatures system, but it does show what’s possible and I don’t see why something similar could not be used in miniatures in an effort to create a more realistic, but still highly playable, game.

In conclusion, Bolt Action is an infantry-centered skirmish level miniatures system, not a realistic simulation of World War II battlefield tactics. But with that in mind, if this is what you are looking for, than Bolt Action is a superior choice.