Brilliant Maps: Zone Rouge: An Area of France So Badly Damaged By WW1 That People Are Still Forbidden To Live There 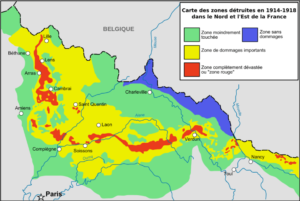 “While WW1 ended nearly a century ago, its scars can still be found across Northern France and Belgium. Zone Rouge (French for Red Zone) is perhaps the ultimate example of this.

At the end of the war in 1918, the French government isolated the areas in red above and forbade activities such as forestry, farming and even the building of houses from being performed inside them.