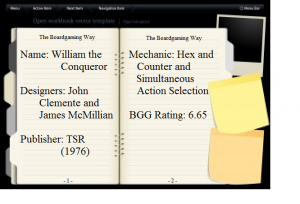 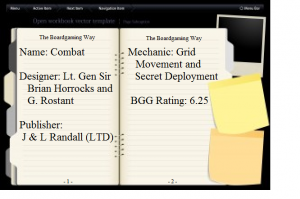 To come straight to the point, whatever mainstream wargaming was doing between 1968 and 1976, it was not doing it with either of these two oddities.

Then again, one abiding memory I have of the times has to do with one of our British Olympic hopefuls (not that there were many) for Mexico ‘68, the utterly wonderful walker Paul Nihill, who tackled both the heat and the competition with a knotted handkerchief on his head.

Ah, heady recollections of Englishmen attacking the Matterhorn in their carpet slippers are virtually unavoidable. As for 1976, it was probably hotter here than it was in Mexico a few years earlier, and there were plenty of handkerchiefs on heads around the beaches of Britain that summer, though no one under them was planning to win an Olympic medal ahead of having an ice cream and a pint first.

Anyway, here were two games capable of capturing the eccentric pulse of the times – one in a box that had about as much information on view as an Area 51 “You Are Here” map, and the other presenting an arresting interpretation of scenes from the Bayeux Tapestry, albeit with something looking like a camel, or a brontosaurus, lurking near the top. I bought both these games in Hamley’s of Regent Street – pretty close to being the last time I ever went there for anything (simply a matter of life moving on). And I got both of them in the same purchase, mad compulsive fool that I was…and then I wondered what on earth I had got them for. 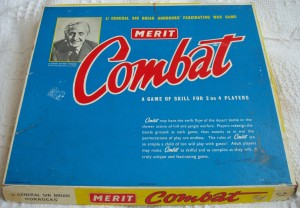 I was standing a bit away from the box (though the front of my flares were nearer) when I first tried to work out whose photograph was on the lid. After a bit of squinting and thinking, I found myself wondering why veteran Brit actor Wilfred Hyde-White was promoting a wargame… sort of thing. I genuinely thought it looked like him, and frankly, I still do. But can you imagine Wilf endorsing a military game? “Now this is a jolly thing, eh?  It’s all about battles, apparently, bang bang and all that, but I don’t think there’s too much noise…who’s up for a sherry?”

Well, it was not Wilf, it was General Brian Horrocks, played with such ebullient charm by Edward Fox in “A Bridge too Far” – great performance, helped keep me awake. As for the real Brian Horrocks, after a little quote on the lid about the frustrations and challenge of war (part of which is surely under-resourced and overly optimistic battle plans), it was time to get on with the frustrations of the game itself. Ah, but that was the point, because from a certain perspective there were precious few frustrations with the game.

For me, it is tempting to see the thing as a Sixties swing around the themes eventually taken up by Memoir ’44. The map was a blank grid to which you attached a variety of terrain printed on semi transparent overlays – airfields, roads, hills, woods…village murder scene. Anyway, with the terrain in place, by player choice, you assembled a force consisting of little plastic minis (tanks, 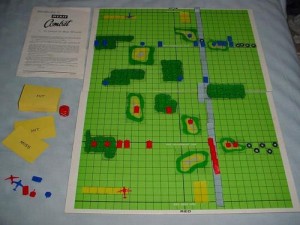 artillery pieces, planes…suave scoundrel posing as a vicar) and then prepared to do battle….yes, bang bang and all that.

Different piece types moved different distances and could attack at different ranges, but apart from that, everything was more or less the same – you drew a card to get a hit or miss for an attack, the defender could then make a save attempt (or, if you know your Wilfred, a suave save attempt) if a piece had received a hit, and that was essentially it…. “Really? Sounds dashed complicated to me. Need another sherry to take my mind off it.”

Where the frustration did come in is in the plain simple fact that it could have all been better with just a bit of thought. No infantry? Put some in, create some objectives and say that only infantry can hold them. Make tanks considerably harder to destroy than guns; randomize how many pieces can move each turn…and then you have a piece of kit worthy of respect. – and something that any child is still going to be capable of playing. And then, for Brian “Stuck in the Hedgerows; Stuck on the Bridge; Stuck on the Box” Horrocks, you really would have had something with a proper sense of it doing what it said on the front… “Well I’ll be damned if I know what it’s all about old boy…good heavens is that the time? Best have another sherry and forget about it…I say, is that a body over there in the library?” 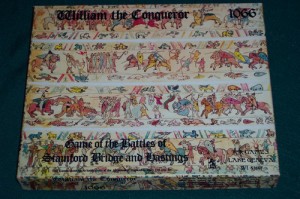 What the blue blazes was this about? On the face of it, you have a winner of a subject here – the pivotal battles which set the course of English history over hundreds of years, including the most famous of the lot, Hastings. So far, so good. We can overlook the misplacing of the great battlefield and what properly went on it, because in years gone by, the archaeological work had yet to be done. I can even forget the TSR bumpy plastic map, which, with its little coloured discs of units in place, looked like a budgerigar’s version of Twister. But that combat system, dice-less and using a slide rule type of jobby  – oh dear, dear, dear.

Ask yourself, what was the essence of combat in those days? Willingness to close, willingness to stand, blood-soaked weariness, the breaks and the taunting, blade against shield, horse against the gleaming point, the heroic example, Valhalla and the Beserker, wassails, relics and the holy rood, that was what it was all about. However, instead of this, instead of a line swaying under the impact of a fiery attacker, the guttural shouts of “Out!”, and the Wessex Dragon, the Eagle and The Fighting Man casting a final forlorn gaze over their last loved day, we got a combat system that looked as if it had been devised by Max Planck. 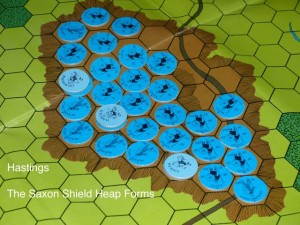 In other words, in a casting dice-less system that suggested cleverness for cleverness’ sake, what you got was units contorting around on abstracted quantum issues of facing, movement and direction, which had little to do with the hours of battle at the two engagements presented – Stamford Bridge and Hastings. In all likelihood, the average Saxon, whether you present him holding tight behind a wall of shields or a ditch and palisade, was hardly likely to have moved more than a couple of feet in any direction for the greater part of the day – so all this quantum pinging around and resolving things with a terrain and position slide rule thingy was representing what? Answers on a parchment or rolled tapestry please, to: Harold Godwinson, Finda-Fyrd Solutions Ltd, Some Field in Sussex, England. 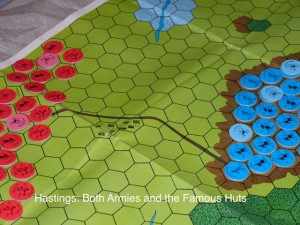 I have played with other dice-less systems – most recently those devised by Rachel Simmons. Obviously, these designs can indeed get a bit technical and abstract, but at least with the Simmons’ designs you still get a sense of reality playing out via the designer’s modeling of events. But playing out a battle to a conclusion with this system, I was never able to decide whether to quaff ale, shout “bingo!”, or submit a paper of scientific import to the Royal Institute.

But….. It was a very good idea to link the battles in a two-part scenario, so that the outcome of Stamford Bridge decided the size of host Harold could bring to the wrong hill. Not only did you have to win that first battle as the Saxon player, you also had to ensure that most of your host did not fall foul of the immutable and progressive laws of thermal dynamics – “it moves, it’s got hot, it ain’t working any more, it’s fallen to bits.” That was the good bit, but just to end, let us have a look at the map. Stamford Bridge was what it was, and who knows what it properly should be? But the Senlac Hill map was…not great. Given the game scale, with the hexes coming in at ninety yards of English ground, the hill sat there like a splat in the middle of the map – open to all kinds of mobile flanking nastiness if not for some incredibly convenient woods and rivers covering everything the Normans might like to move through…or perhaps the right term is “permeate.” Meanwhile, the Saxons sat there, all over this “hill,” hundreds of yards deep, like a summer concert audience waiting for two or three hours of Viennese froth to finally abate. The box design was nice though….