“The history of the board game Go can be traced back several thousand years to Asia, particularly China where it’s thought to have originated. Go is played on a board of various sizes (standard size is 19×19 grids, but can also be played on 13×13 or 9×9). The board itself may look similar to Othello for example, but the Go pieces are not played inside the squares (that is to say, not placed in the squares like Ludo King or Monopoly) – rather, the stone game pieces are placed on the intersections of the squares, directly on the grids. 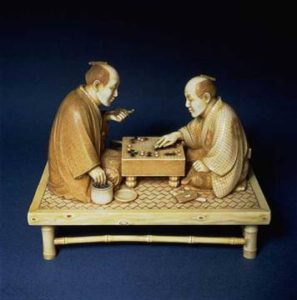 The objective of Go is basically to own the largest section of territory on the board, achieved by strategic piece placement, and effectively blockading your opponent. It is a highly strategic game that really flourished in feudal Japan, with several schools popping up during the Shogunate era, and stipends being awarded to the best Go players. However, despite its huge popularity in Japan, it is generally agreed upon that Go originated in China, and was considered one of the “Four Accomplishments” that should be mastered by Chinese gentlemen – the other three being the qin (a stringed musical instrument), shu (Chinese calligraphy), and hua (painting)….”