Cyningstan: In Search of the Lost Games

“The traditional board games that have survived from historic times serve as a treasure trove of entertainment for the modern gamer. But not all of them have come down to us intact. The boards that archaeology has yielded up bereft of rules of play are in some cases very beautiful, their mute pleas to be played beyond our ability to answer. In literature the allusions to characters playing lost games make us feel that we’re missing out on something special. 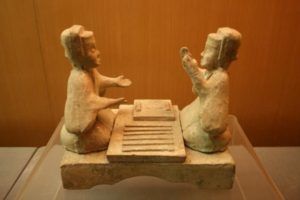 “Eastern Han glazed pottery tomb figurines playing Liubo, with six sticks laid out to the side of the game board” – Wiki

It’s only natural that players today are attracted by the allure of these mysterious games, that we have a desire to bring them back to life and enjoy them as our ancestors did. And over the past century or so there have been many games that have been reconstructed; some of the reconstructions are of better quality than others….”