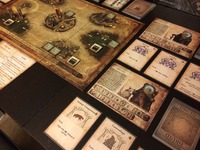 There is a whole class of games that deal with a world of fantasy, with demons and trolls and evil wizards growing more and more powerful, until they can be stopped by a handful of heroic knights or elves or young girls with magical powers.They are, by nature, pretty similar. Whether you have to find a glass key, a golden feather or a cup of unicorn tears to unseat the nearly unstoppable foe, you are in for a search, in for a battle and – in the end – the farm or the shire or the country is saved from the powers of darkness and decay.Fair warning, this is one of those adventures. But you really don’t need my hint – just look at the cover art and you’ll see a heroic group of young fighters and middle-aged wizards, with a dark, evil figure looming above them. 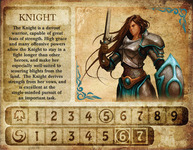 At its  heart, Darkest Night is a contest between four heroes – you have 10 to pick  from – who each have special powers, and a Necromancer who just gets stronger  and stronger as the game goes along, and who can only be killed by rolling a 7 on a  six-sided die. If you are intrigued, this is a game for you. If not,  you will never be happy going  through the Darkest Night. On one hand, its a really simple game where one side moves his or her players to  one of a half dozen places, looking for special treasures, while getting stronger and  stronger as the game goes on.But, at the same time,  there is a good chance those players will get weaker and have to stop and recover their strength. Meanwhile, the Necromancer gets stronger and stronger as the game goes on, and he can build up his power slowly and steadily, while forcing the heroes to jump around and try to slow his inevitable progress.Think of it as the Tortoise and the Hare, with the slow but steady virtue in the hands of the Evil One.Again, as the heroes get ready for battle, its really simple. And, its not.There are just two traits to the heroes, grace (read it as battle strength) and stealth (which is just what it says, the ability to flee from a fight). Heroes die when they lose all their grace, but you can sacrifice stealth to keep that last bit of grace you need to survive.Of course, the evil Necromancer has an even better trick. He can sacrifice one of his minions – those blights he creates every turn – to save his own life.And, there’s another layer here, too. Even if a hero dies, there is another one waiting in the wings to pop up and continue the good fight. All you might lose is time, but time is all the Necromancer needs to win the game. 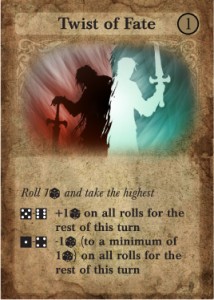 As I said, you either like this kind of stuff or you don’t. It might be worth the price of the game just to find out what kind of player you really are. This is a D&D battle that you can plan all kinds of strategies, and where every character has some awesome powers. But there is also an inexorable dark force to contend with, and there are just too many options to do  more than come up with a general plan and go along for the ride.Before going into the mechanics of Darkest Night, a couple of points need to be said up front.  Each of the heroes is represented by a cut-out cardboard figure, and while they serve well enough, the game cries out for something better. Try searching out some of the figures you painted years ago and left in a box in the basement. Let them out to do battle with the Necromancer! You can still enjoy the artwork on the character cards.And, while you’re doing it, take out an evil wizard or an orc or a vampire figure, and let them contend with the puny humans trying to cleanse the realm of the Necromancer’s hard work and evil allies.But that’s cosmetic. A  more important point is that this game defies simple math. You can’t just calculate an attack of 5 against a defense of 3 and figure out what you need to roll to win the fight. Resolving battles is a lot more complicated.Which almost gets us into the rules. But first, the math problem.

Each hero has a power deck of 10 cards – they all start with a pre-selected four and  players pick the others up as the game goes on – so its possible that in any battle  you have any one of a hundred things going on. More, actually, since you can play  multiple cards. Meanwhile, the Necromancer goes around the locations on the playing board – a  castle, a monastery, a village, a swamp – creating blights. Blights are evil  presences which can attack the heroes who venture into the forest or the village  or some other area, seeking magic items, including the one special artifact that  lets them add a plus one to their die roll. Which is the only way to roll that 7 you  need on the six-sided die.There are 15 different kinds of blights. Naturally. they all have different powers. And, if the Necromancer is in an area with a blight, he can’t be attacked until the blight is first destroyed.There is also a limit of four blights in any single area of the map. Create a fifth, and it automatically goes into the Monastery, which is the only area the Necromancer is not permitted to enter.If five blights show up in the Monastery, the game ends and the Necromancer wins.So, you have to go around getting rid of them, which can create a whole new set of problems for the heroes. To clear the blights requires a lot of heroes and a lot of magical items, although they can pass that one special artifact around if heroes are in the same area. Some of the power cards the heroes acquire are really powerful. just looking at them can make a player think that winning the battle will be a snap, and that any four of the 10 possible heroes will be able to do it. That’s probably what the hare thought when the race with the tortoise started.What you really get is a problem. Four strong, healthy heroes can destroy four times as many blights as the Necromancer can create – at least until he reaches a level where he can sometimes create two at a time. Or sometimes three.But, once one of those heroes is weakened in battle, you might not want to risk having them go out alone. They can take time to heal, but that risks the number of blights increasing. And, not all of those special powers turn out to be useful in every situation.

The Different Classes you can use in Darkest Night

And, another rules trick. The Necromancer has to move toward a hero that he actually sees – that’s where the stealth rating comes in – or must move according to a die roll. And sometimes that roll means he stays where he is.  That means your grand strategy of surrounding the evil one and attacking from all sides could fall apart with just a random roll of the dice.What you have with Darkest Night is a game that, at best, will draw on your imagination to spend a few hours with heroes and monsters. Its not the traditional battle with your magic sword or powerful spell, but one where the conflict spins in ways you might not expect. Its like being on a roller coaster – you move around a lot, interesting things happen, and there is danger and fear. And, you don’t have much control over it all.So pick your party, choose your spells and powers, and go out into that Darkest Night and show that Necromancer just how Grace and Stealth can defeat all that evil. Or not.Just remember a couple of things. Its a small game, but you will probably need a big table to lay out all those cards. And, prepare yourself for a long Dark Night, since it will take a lot of turns to resolve the conflict, unless all the heroes are (a) bad players and (b) really unlucky. In that case, the game will end quickly.To sum it all up, you will have a lot more fun if you play the fantasy, not the game. If your campaign is geared to getting the best power cards and eliminating the weakest blights and finding those keys that will lead to the holy relics, you won’t have as much fun as if you pick an interesting party, try to create a sense of identity for your characters, and go out into that dark night to fight evil to the death.After all, what’s the worst that can happen?