[Imagine my surprise when my sharp-eyed publisher noticed that I had reviewed this game once before. A couple of years ago, true, and on a battle I have gamed a lot of times – going back to those two old classics, Sinai and Bar Lev.

Well, I read the original review (its archived on the Boardgaming Life online magazine website), and as they say in court “it refreshed my memory.”

There’s probably a couple of essays to be written on the way different designers approach the same subject, and how well or how poorly game mechanics and designer efforts mesh together.

And I might even look at the tyranny of game counter limits, the merciless demands of scale on map hexes or the good and the bad of rules complexity.

But those are thoughts for another time. I’m just glad I got a chance to revisit a really good game that, I know, is hiding somewhere on one of my shelves. It happens to all of us, and we should all be lucky enough to find those good games again.] 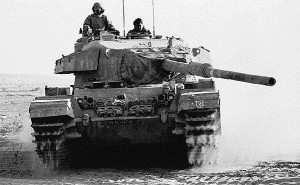 There is just something about the Golan Heights that attracts wargame designers, although their approach – at least in the games I have played over the years – has changed in many ways.

Still, with all that competition, Frank Chadwick’s “Days of Battle – Golan Heights” comes out with pretty high grades. The rules are clean, the map does a good job handling the difficult terrain, and he manages to deal with the historic overwhelming strength of the Syrian attackers without losing game balance. As a result, the first few critical turns aren’t a boring slug-fest or an overwhelming assault that ends the game.

If you’re not familiar with the battle, that might sound just a bit confusing. Trust me, its not. From a military standpoint, the 700 square miles of the Golan Heights is a nightmare, with forests and swamps, and an elevation that runs from 9,200 feet above sea level to nearly 700 feet below sea level.

But, as I said, the map is really good. 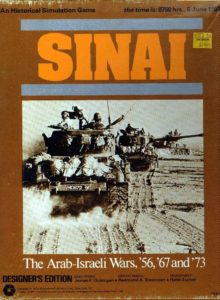 One of the oldest wargames in my collection is SPI’s Sinai, which came out in 1973, the year this battle took place. It handled all the problems of the Golan Heights by simply  ignoring them – all of the fighting in that front of Arab-Israeli war takes part in just a seven hex front in the upper corner of the map. As the title says, almost all the action is between Egypt and Israel in that vast desert.

In this game, the Golan Heights gets all the attention it deserves.

Days of Battle is a sprawling overview of the hard-fought, deadly combat that saw the Syrian Army intent on erasing its bitter 1967 embarrassment. The Israel forces, meanwhile, have little room to give ground. If they can’t hold their thin line, they risk seeing their small nation cut in half.

Chadwick has some innovative ways of dealing with the game’s problems. One small but very important innovation is his re-inventing zones of control. Syrian combat units – and there are a lot of them – must stop when they enter an Israeli zone of control and can never completely leave. But, they can move from one Israeli zone of control hex to another – which keeps a tight battle going and also prevents a major Syrian breakout. Usually.

I also like the way he brings in reserve troops and reinforcements. Both sides can re-build damaged units to full strength, but those units must be at rest to do it. Can’t fight, can’t move. And the units that will need rebuilding are usually the ones that are in the most critical part of the battle. Good luck with that. And good luck, too, with stacking limits as the Syrians try and build up strength early on to attack the Israeli player without violating those zone of control limits.

For me, those are the key drivers of game.  But, there’s more. 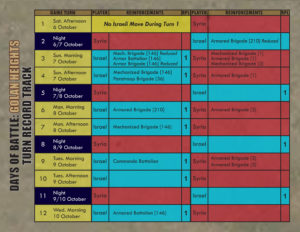 In a really interesting nod to the reality of 24-hour combat, his units have differing combat strengths in the day turns and the night turns. Which reflects what really happened. Tanks are more accurate and have better range during the day, while infantry units are stronger at night when its harder to see them.

We also shouldn’t ignore the random events cards Days of Battle throws in just to make each turn a little more unpredictable.  Another gold star goes to the really effective way the game handles the Israeli fortified positions which hold up the Syrian advance.

The cards are easy to use. Some actions take place immediately, some have to be held for later use. Each player starts with 12 cards, discards 3 at random, and then draws one each turn. They never quite know what they are going to get – an early reinforcement, delay or eliminate an enemy replacement, or an air strike to increase attack odds. You can even force one enemy unit not to attack if you draw the right card. 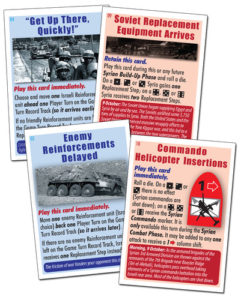 I also give high marks to the Israeli fortified positions that block the Syrians. They aren’t powerful, but they have zones of control which are effective as long as any Israeli unit is within three hexes of the fortification. Those zones of control go away when a Syrian unit enters the fortified hex,  or when no Israeli unit is within three hexes of them. But they come back once the original status is restored.

Now, no game is perfect. The side which starts first changes from turn to turn, which means both the Israelis and the Syrians get to move first two turns in a row as the game goes on – which is really good for defenders and gives the Israeli player more time to bring in those badly-needed replacements.

And, knowing there is a card out there which could open a hole in your  line – either side – or take a key unit out of battle is a real mix of fun and agony. Especially if you are playing a solitaire game. You can’t even be sure of outsmarting yourself.

While its a little nit-picky, I found it a little hard to get the cardboard map to lay really flat without  putting a sheet of lucite on top of it. And one of the little red tank markers which shows the Syrian initial set-up is a little too close to the crease between map sections, making it a bit hard to find.

But all that quickly fades as the Syrians and the Israelis fight across the board. It’s a tight battle – all the Syrian player has to do is cross 12 hexes to reach his victory conditions, but it’s not easy.

In really good war games, it never is.