Dungeons and Dragons: Conquest of Nerath: A Boardgaming Way Review

Dungeons and Dragons: Conquest of Nerath 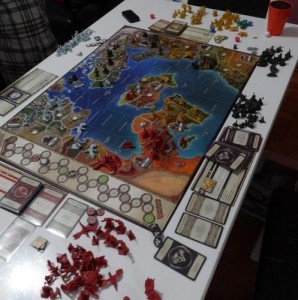 The Conquest of Nerath board – BGG

Perhaps the best way to describe this game is to call it an Axis and Allies clone set in a D & D universe, with dragons as its fighter planes, cyclones as its battleships at sea and its bombers on land and heroes and/or catapults as the equivalent of A and A tanks. In addition, it has random event and treasure cards plus Haunted Caverns to explore with the help of friendly wizards. It reminds me a lot of Warparty, except that Warparty also has a fairly large tech tree.

So, basically, we are talking about an area movement, resource management, 4X game. (For those new to gaming 4X means players expand, explore, exploit and exterminate. In Nerath that translates into expanding into a neighbor’s territory, exploring Haunted Caverns, exploiting controlled territory to build new units and exterminating opponents.) And while Conquest of Nerath has cards it’s not a “Card Driven Game (CDG), its more on the order of a “Card Assisted Game.”

To be specific, Conquest of Nerath’s campaign game starts with 4 Home countries in the board’s corners, surrounding a middle sea. There is a rather large island in its center, which is also divided into various regions. Play rotates clockwise around the border, starting with the Karkoth Empire, so in the alliance version the first and third players (the bad guys) face off against the second and fourth players (the elves and humans). 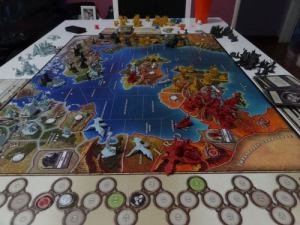 The Conquest of Nerath board. The game starting with the undead Dark Empire of Karkoth in the upper left hand corner moving first and rotates clockwise with the elves of Vailin, the goblin Iron Circle and the human League of Nerath only then moving. With the Karkoth-Iron Circle forces, in oppose corners, allied against the Nerath-Vailin forces, a turn breaks down to the first and third players against the second and fourth. Unfortunately, that means both bad guys go before the Humans can react. See the problem? – BGG.

Of course, I realize the game is called The Conquest of Nerath, but, really, what’s the point of playing if the outcome is always the same? The latest alliance of elves and men seems to have two main problems: their play order and their initial position. As far as their play order goes both the powerful Dark Karkoth Empire and the equally powerful Iron Circle go before the humans in Nerath can respond, so they are always opened to being double teamed. This results in a good half of the Nerathian navy and about a quarter of their land forces and provinces being picked off in detail before they can even respond. Now it’s true enough that their allies, the Vailins, could intervene as they activate second, but unfortunately they have problems of their own and in any event they are nowhere near powerful enough to change the strategic situation. So by the time the initial Nerath turn arrives players usually find them in a defensive crouch. And by the time the second Nerath turn rolls around the game has settled into a 2.5 empires vs. 1.5 empires slugfest as Nerath has by then been attacked four times and has only responded once.

As for their position problem both the Nerath and their Vailin allies begin dispersed, with the Nerath having to defend three off-shore areas, while the Vailin have two isolated enclaves, making a total of 5 weak points in their alliance’s initial defensive arrangements. The Karkoth – Iron Circle position, on the other hand, is much more compact and their endangered forces are much fewer in number. In any case, as they basically go first, it’s easy enough for them either to reinforce their at-risk forces or, as a last resort, to sacrifice them.

Put simply, the 4 player alliance scenario lacks tension. For example, in Axis & Allies, players don’t know who will win a game until well into it. While the German player starts strong and expands through the first third of the game, the U.S. player comes on even stronger. Will the Allies’ surge overwhelm the initial German advantages? Who knows? The players simply have to finish the game to find out.  But in Conquest of Nerath, at least in the version we played, the initial leader is always the leader. Now, some people call this a “runaway leader problem” and some call it the “snowball effect,” but whatever you call it, why bother playing the last half of the game?

In addition, its “Haunted Caverns” feature only adds to its imbalance as strong players tend to loot the same cavern repeatedly. Yes, the cavern defenses get stronger as the game goes on, but then the stronger players gets stronger even faster. So there is just no reason for a player to invade more than the one or two caverns in their original home territory. In any event, the weaker players don’t have the surplus resources needed to engage in cavern crawls anyway. So, besides providing a  D and D atmosphere, whatever little else the “Haunted  Caverns” feature adds to the game only increases its imbalance problems.

Further, as a number of players have pointed out, you only earn Victory Points for conquering enemy territory, not for holding your own. So instead of counter-attacking an invading army players tend to invade some less well defended neighboring territory. This in itself, is not an imbalance problem, but it does strike some people as exceedingly strange. After all, what country in history has ever reacted to an invasion by marching off in a different direction?

Now, these problems are so obvious in the 4 player alliance scenario, that one leaves the game with the distinct impression this version was not play-tested.

Although, even if there aren’t in-game solutions to these issues they might not be game breakers as simply letting the Nerath go first could allow the Nerath-Vailin alliance to defend itself without having two hands tied behind their back. That, plus some refining of the Victory Point conditions and a limit on how many times the same Cavern can be looted just might be enough to re-balance the game. But, of course, you’d be perfectly within your rights to ask why with all the great games on the market these days it has become your job to finish developing this one.

Still, if you like Axis and Allies, and don’t mind doing some development work of your own, you’ll like Conquest of Nerath. It has problems but they are fixable.