By the Hollandspiele staff: 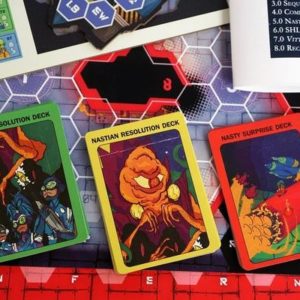 “Start with an impenetrable prison swarming with Nastian warriors… stir in a captured princess, heir to the Laylian Empire and all its riches… add a dash of insane alien monsters who want to blow the place to smithereens… and all it takes is the craziest security detail in the Solar Hanseatic League to bring it all to a rolling boil! The result is a recipe for excitement, adventure, and suspense prepared just for you by the proven team of designer Fred Manzo and developer Hermann Luttmann.

Escape From Hades is a solitaire science-fiction extravaganza! It’s a race against time as you make an opposed landing on the prison’s surface, destroy its defenses, shimmy in through the maintenance shafts, fight your way to the princess, then fight your way back out again, all while your ship fights for its mechanical life against squadrons of enemy fighters and surface defenses….”