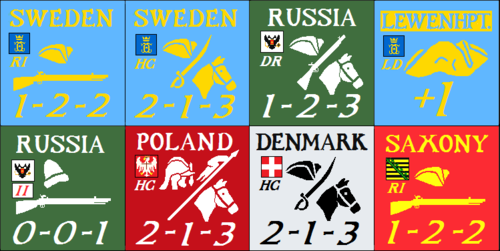 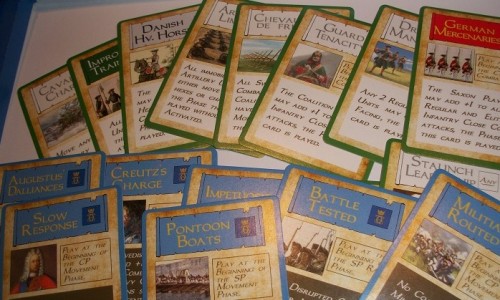 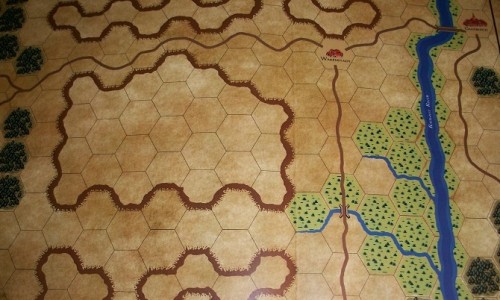 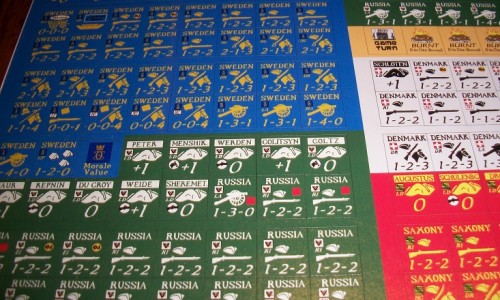 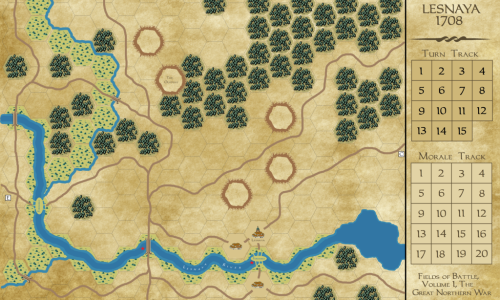 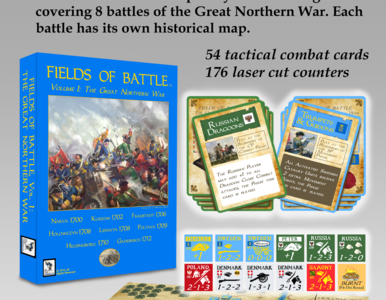 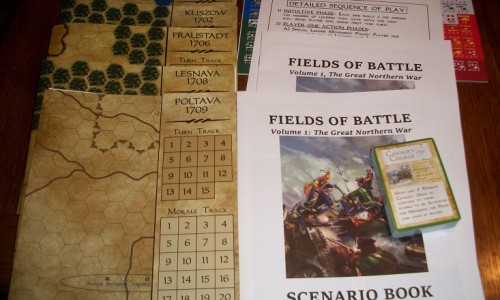 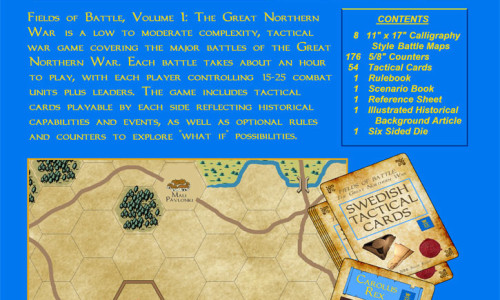 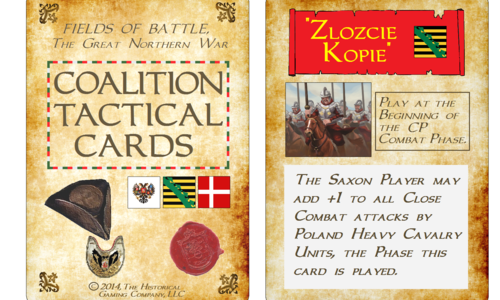 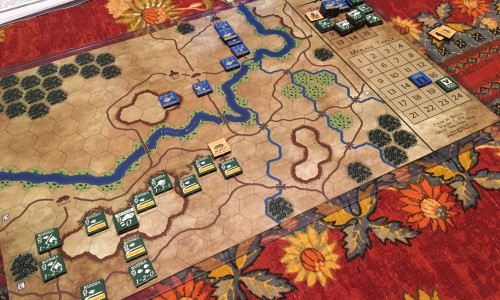 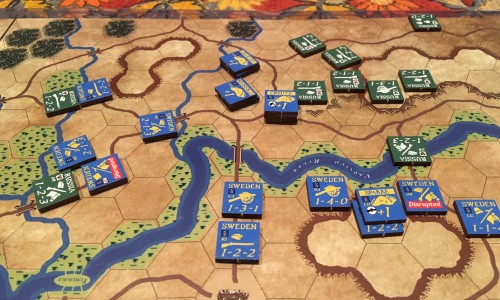 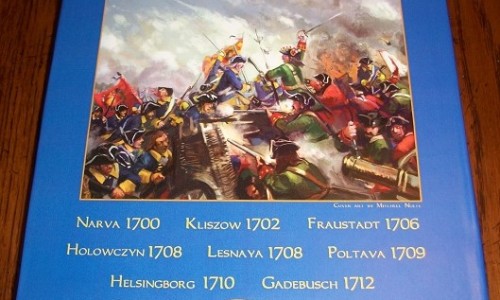 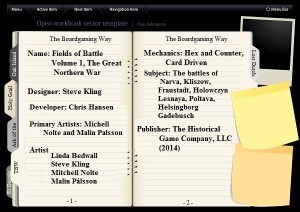 We haven’t had time to give it a thorough run through, due to the press of events. But I’d like to provide a quick overview of the game for those who are intrigued by its subject matter. Hopefully, some of the usual suspects will put a few of the battles though their full paces fairly soon.

Basically, we are talking about a low complexity game for those interested in getting their feet wet in either the Great Northern War or wargaming in general. 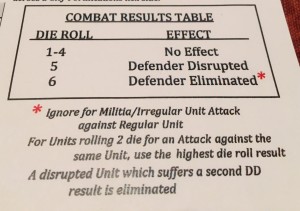 For example, the Combat Results Table has only 3 results and the list of Die Roll Modifiers runs to no more than 4 or 5 items.

Furthermore, units are either at full strength or “disrupted,” in which case they cannot move or fire. However, disrupted units can recover if they are outside a Zone of Control, which units generate into their 3 forward facing hexes. Disrupted units also recover when stacked with a leader.

In addition leaders influence which player holds the initiative, plus they provide a combat bonus and they activate units they are stacked with or adjacent too.

The battle of Holowczyn (1708) from the Russian point of view. Hermann Luttmann played the Russians and I controlled Sweden’s forces. The Turn Track is in the upper right of this picture and the Morale Track is on the right, under it.

Stacking is a maximum of one combat unit and one leader, with there being three main types of combat units: cavalry, artillery and infantry. Although there are subdivisions that include militia, regulars and elite formations.

Morale is also important in that when an army’s morale drops to zero you lose. (Armies lose Morale due to leaders and units being eliminate or important objectives being captured.)

The game’s tactical cards do not drive play but do provide historical flavor. It’s probably more accurate to call this a “card assisted game” as cards may produce Die Roll Modifiers for combat, or result in leader casualties or allow certain rules to be temporarily ignored or they may even provide units with extra movement points etc.

There are also Die Roll Modifiers for flank attacks, leader and troop quality. And while a unit’s facing is important for movement and attack, it’s not terribly restrictive. 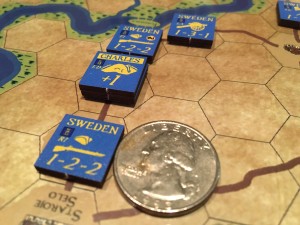 The counters are super-thick, but without soot!

In total, the rules run to about 8 pages, with a separate scenario booklet that runs to 12 pages. The game comes with 8 maps of 11″ by 17″ in size and a total of 176 counters. Though these counters are of the super-thick variety. (But only a fraction of them will appear in any one scenario.)

For those of us a little rusty on the particulars of this war, basically it’s Sweden vs Russia and some friends. 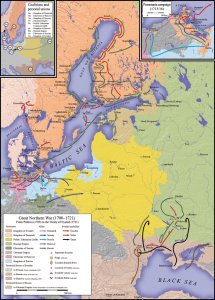 As per wikipedia: “The initial leaders of the anti-Swedish alliance were Peter the Great of Russia, Frederick IV of Denmark–Norway and Augustus II the Strong of Saxony–Poland. Frederick IV and Augustus II were forced out of the alliance in 1700 and 1706 respectively, but rejoined it in 1709. George I of Brunswick-Lüneburg (Hanover) joined the coalition in 1714 for Hanover and in 1717 for Britain, and Frederick William I of Brandenburg-Prussia joined it in 1715.”

Charles XII, the “boy king,” led the Swedish army. Also on “the Swedish side were Holstein-Gottorp, several Polish magnates under Stanisław I Leszczyński (1704–10) and Cossacks under the Ukrainian Hetman Ivan Mazepa (1708–10).” 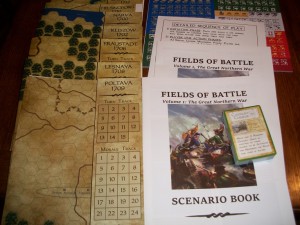 Components for “Field of Battle: Volume I.” (Click to Enlarge)

The games terrain includes all the usual types plus large and small villages, fieldworks, redoubts, city fortifications and bridges. 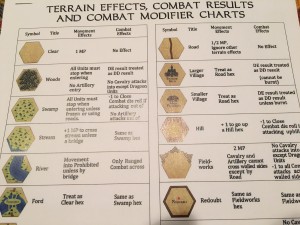 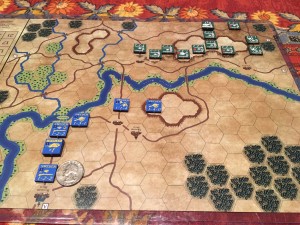 The starting position in the Battle of Holowczyn (1708) from the Swedish point of view.

Initiative Phase: Initiative is determine by a 1D6 die roll plus a +1 DRM for each +1 leader a side has on the board. The highest modified die roll goes first in a turn.

A. Special Leader Movement Phase: Leaders move. (The position of a leader is critical because only units stack with leaders or adjacent to them plus any 2 others may move.)

B Artillery Ranged Combat Phase: Artillery may fire a ranged attack and attack again when close assaults occur. They may also fire and move, if they are allowed to move, that is. (Not all artillery may move.)

C. Regular Movement Phase: But a maximum of one unit and one leader may end a phase in a hex.

D. Combat Phase: There is range fire and close assaults, although due to their combat doctrine Sweden’s infantry/cavalry do not use ranged fire, preferring to concentrate on shock combat at all times.

F. Discard/Draw Tactical Cards Phase: Player may discard useless cards and draw back up to a full hand at the end of each of their turns.

(Each tactical card deck is fully in play for each player throughout the entire game, with cards that do not apply to a particular scenario simply being ignored. For example, a tactical card that mentions allied units that are not involved in the battle being conducted may be discarded at the end of a turn. Although they did take up space in your hand that could have been better used by a more helpful card. So at any particular time a player’s hand may contain no useful cards. That’s war.)

Second Player Action Phase: The same as the first player’s. 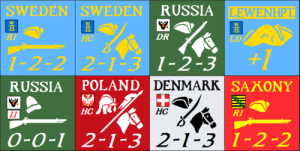 The numbers across the bottom of most counters represent, from left to right, the number of attack dice it controls, its range, and its Movement Allowance, with a road hex costing 1/2 a MP. A counter’s flip side shows it as “disrupted.”

As per BGG: “the game is low-complexity and designed to be played quickly. Most scenarios have only 15 to 30 units per side and only 15 turns….

The victory conditions vary by scenario but generally involve capturing key areas on the map or reducing your opponent’s morale.” 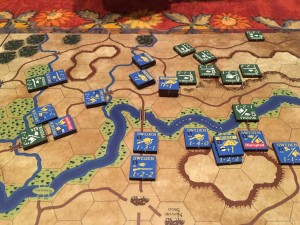 This is turn 7 I think. I used Sweden’s reinforcements that entered along the road in the bottom left of the picture to seal off my left flank at the stream lines and then attacked the Russians right flank with the bulk of my infantry and leaders. My artillery seems to have missed just about everything for the entire game but my infantry with leaders and a flank bonus now and then crushed the Russian right flank. However, as Russian Morale starts at 20 it takes an awful lot of fighting to break them. 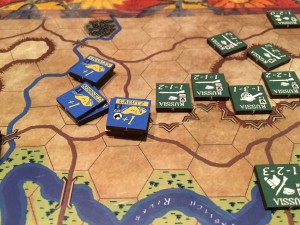 A close up of the action after I launched the Swedish close assault on the Russian right flank. According to Wiki, “Caroleans (Swedish: karoliner) were the soldiers of the Swedish kings Charles XI and Charles XII whose notable tactics differed from that of Western Europe through a greater reliance upon pikes, bayonets, and the spirit of the offensive…..The Gå–På–method (Literally Go-On) specialized on shock tactics and was the standard combat technique used in the Swedish army at the time. This very aggressive tactic often resulted in short-lived battles in order to counter superior numbers of enemies.” 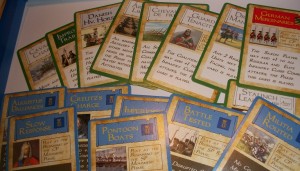 A sample of the game’s tactical cards 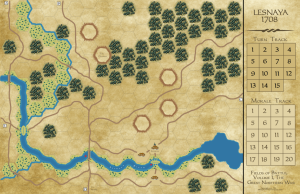 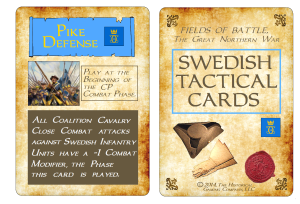 Starting from a card’s top left corner, a tactical card shows its title, nationality (upper right corner), then some art work, then when it can be played and finally, at its bottom, its effect on play. (Note: not all cards can be played in all battles, though all cards are in every player’s battle deck for the entire game.)

According to Steve, “Fields of Battle, Volume 1: The Great Northern War,” is a low to moderate complexity, tactical war game for two players depicting battles of the Great Northern War, 1700-1721. Each battle in the game is played on a game map using playing pieces representing the forces of the participants in the Battle and uses a six-sided dice (D6)… Players take the side of either Sweden or the Coalition (representing the forces of Denmark, Russia, and/or Saxony. Each Battle has specific victory conditions…. Battles are described in a separate Scenario Book explaining the number of game turns, set up and special rules.

Each game map shows the terrain for a particular battle together with the name and year of the battle, a Turn Track and a Morale Track.” 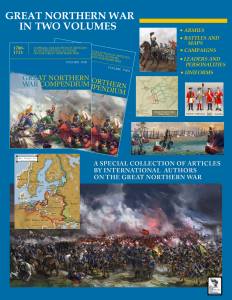