“On November 16, 1632, two armies faced off at the site of Lützen, Germany. On one side was Gustavus Adolphus II, King of Sweden, and on the other was General Albrecht von Wallenstein, the leader of a regiment of Holy Roman Imperial forces. The Thirty Years’ War was Europe’s deadliest religious conflict ever, ultimately claiming an estimated eight million lives — including the King of Sweden, who led the cavalry at Lützen but was killed in the brutal attack. 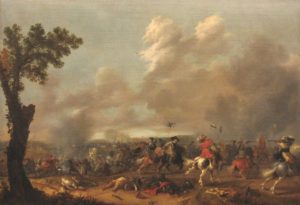 Gustavus Adolphus in the battle of Lützen by Jan Asselijn (top) and Pieter Meulener. – Wiki

This week in the journal PLoS ONE, a group of archaeologists led by Nicole Nicklisch reveal their analysis of 47 soldiers who died in the Battle of Lützen and who were buried in a mass grave. They found that these men ranged in age from 15 to 50, and that many of them had suffered previous traumatic injuries in their lives. While the researchers were interested in the general state of the soldiers’ lives leading up to their deaths, their main aim “was to analyze the fatal injuries the men sustained during the battle,” in order to learn about “the fighting and the military and strategic operations on the battlefield….”