I played every game about the Yom Kippur War, so you don’t have to. Here’s what I learned. 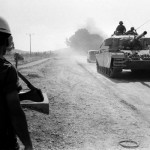 It was at 2 p.m. on the sixth day of October 1973 — the afternoon of Yom Kippur, the Jewish Day of Atonement — when a barrage from 2,000 artillery pieces along the Suez Canal signaled the start of an epic war. It was epic as a chapter of history, when an overconfident Israel saw its vaunted army and air force battered by an Arab surprise attack, only to reverse the fortunes of war in a week with a counteroffensive that left the Egyptian armies surrounded and Damascus in range of Israeli artillery…..