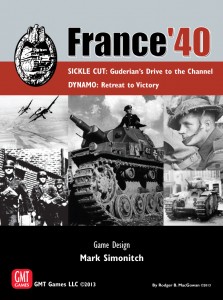 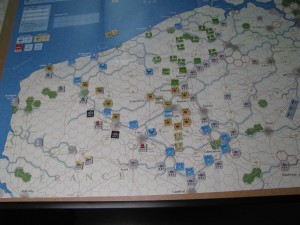 When I first tried the Dynamo scenario from France ’40, I looked at the setup and assumed I was in for an Allied disaster. It turned out, however, to be a much more intense experience.

As this game was new to both of us, we proceeded cautiously with the rules. I was able to retreat the necessary Allies off the board by turn 11 and won. However, I realized this game had a great deal of replay value, so a couple of weeks later, we decided to play it a second time taking the same sides.

This article is focused on our second game, which was just as intense as the first, actually it was even more intense.

France  ’40 is a two player, hex-and-counter simulation of medium complexity that can take up to 4 hours to play. It comes with two scenarios: Dynamo and Sickle Cut, each with its own full-sized map.

The object for the British in France  ’40’s Dynamo scenario  is to perform a careful defensive pocket collapse and evacuate 14 units from Dunkirk and its adjacent beach hexes (with 10 being British) by the end of turn 12. 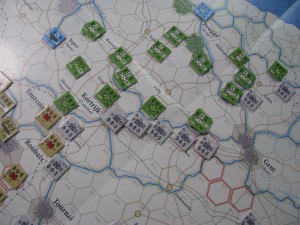 However, went we played I did not take any pictures as I didn’t realize they would be needed. So for this article I set up the game’s start positions, took a couple of  pictures and made some notes.

The first picture, above, is an overview of the starting positions. The German player has 9 Panzer Divisions at reduced strength. But 2 of them are in western France and cannot move unless the  Allies close on them, which is highly unlikely.

The Allies have 6 “Halt” markers that may be placed on the other Panzer divisions during the first three  turns of the game. After the British are given the chance to place these markers, two dice are rolled to determine which two German divisions may be utilized in a turn. (Although a ‘Halt’ marker cannot be placed on the 1st Panzer division, next to  Calais, for the first turn.) Though while this all sounds great for the Allies, each of the halted panzer divisions flips to its  full strength side. 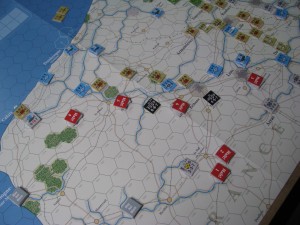 An example of the “Halt” markers in use.

Tactically, although the Allies start in a good overall defensive position, there is one very weak point in their line that the Germans will undoubtedly assault (over the river toward Hazebrouck). As the area behind this section of the front doesn’t have any defensive terrain to speak of, the Germans have the opportunity to drive a deep wedge into the center of the Allied pocket.

In fact, in my game one panzer division did get through this gap, though I was able to rush just enough Allied units into the breach to prevent the Germans from easily exploiting the situation. Plus, the ‘Halt’ markers placed in turn 2 and 3 also held them up from attacking.

Now, if the British have retreated quickly enough in other areas, they may even be able to launch a counter-attack at this point. However, as this isn’t easy to perform successfully, I instead decided to defended with as many units as I could and throw in whatever air units I had.

On turn 4 I had the Allies start withdrawing from Dunkirk and its adjacent beaches. Turns 4 and 5 were especially critical because the Allies also had to replace the defending Belgium forces, who surrender on the Allied phase of turn 5. This could leave the Allies with a great dilemma if they haven’t also planned to withdraw from the south and back up the Belgians. (I did so with some French and a couple of British units where necessary.) 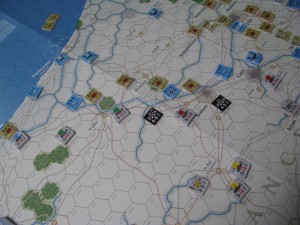 In addition, in turns 6 through 9, the German panzer divisions that start to withdraw from the map will help slow down the German attacks, but those divisions that remain are stronger due to the strength increases they received in the first 3 turns.

Plus, during the last 3 turns of our game, the Germans were next to Dunkirk and one of the beach hexes. This had an impact on the Allied die roll that made it tougher for a successful unit withdrawal. I managed to hold Dunkirk! I was fortunate to have the right counters in the right hexes to withdraw a unit and replace another in the city.

In all this pressure of retreating and the Belgians surrendering, I focused so much on the evacuation of 14 units that I forgot that 10 had to be British! The intensity increased to a heart pounding level of trying to evacuate 4 more British units in two more turns. Well, as you can see by the last photo, I had to get the last surviving British unit out or the game would have been an Allied loss. I wouldn’t hesitate to play this again and again. Be warned that if you play the Allies, take your blood pressure regularly during the course of the game! 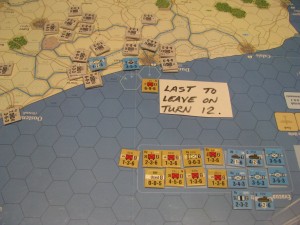 Rules Summary for the Dynamo scenario