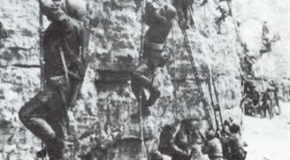 [Alexander of “The Player’s Aid”website interviews Hermann Luttmann the designer of the upcoming game “Crowbar: the Rangers at Pointe du Hoc.” “Flying Pig Games’ will Kickstart it in July. I was the game’s developer. Crowbar

By Fred Manzo According to Herm, this game is based “on ‘In Magnificent Style,’ so each counter is abstracted a bit as to actual size. Each of the three companies – Dog, Easy and