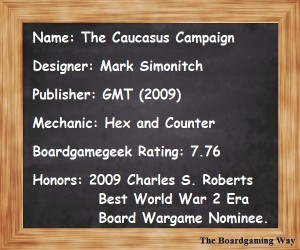 The Caucasus Campaign is another great game from GMT and game designer Mark Simonitch. It covers the German 1942 Summer Campaign in Russia during World War II. There was only one other game on this subject, Edelweiss from Clash of Arms. Interestingly, these two games covered only the summer campaign into the Caucasus region.

Mark Simonitch has been able to cover this campaign in a fascinating way. His game is quick playing and interesting for both sides with good replayabilty due to its random events and reinforcements.

The rules are 24 pages long with lots of examples and are printed in color. Four pages of the rules are dedicated to an example of play. This helps the players to jump right into the game. Its mechanics are similar to a number of Mark Simonitch’s earlier designed games and captures the essence of the campaign in a simpler yet elegant design.

The map is 22 x 33 inches and is clear and pleasing to look at. There are however certain areas of the map that were counterintuitive to me. For example, according to the rules, a river does not flow through a marsh or major city hex. Also note that the most predominant terrain benefit is used for a hex if it contains several terrain symbols (so why show the extra terrain symbols on the the map?) The mountain passes look like mountain peaks to me and the hexes 1328, 1329, 1429 and 1430 are considered to be intersected by “lake hex sides.” The map covers from the Rostov/Taganrog in the west to the Caspian Sea in the east and from to Rostov in the north to the Caucasus mountains and the Black Sea in the south. The map is still very well done with integrated charts and tables and looks beautiful with the counters on it. The 2 Player Aids charts are in color, very clear and nicely formatted.

The 5/8 inch counters are very well done with colored bands at the top of some counters which refers to their set-up area. The different colored centers of the standard NATO symbols refers to troop quality, which will also gives a combat advantage. If you look carefully at some of the armor counters the armor icon has a white square around the edge of the counter which indicates that it does not count against stacking limits. There are also historical divisional symbols of the actual divisions on each counter. The counter density of the game is low and since infantry moves slowly both sides need to be careful when committing these units since it takes precious time to redeploy. These are very nicely designed counters!

The Sequence of Play in “The Caucasus Campaign”

(Note the important differences between the Primary & Secondary Impulses and when they are executed in the Sequence of Play.)

1. Check for Sudden Death Victory. The Soviet player wins if the Germans do not have the minimum of victory points needed by Turn 6 or the Soviets capture Rostov. The German player automatically wins if he has 7 more victory points than the benchmark listed on the turn record track. 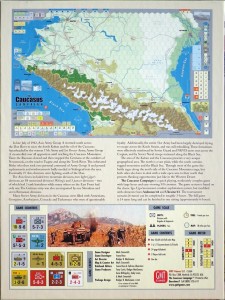 The Caucasus Campaign (GMT) back cover

During the Secondary Impulse mechanized and cavalry units are allowed their full movement, but must pay +3 movement points to participate in a combat. Infantry units have the option of either moving a single hex OR participating in a combat, but they cannot do both. Mechanized units are also allowed to perform Mobile Assaults during movement – something that they are not allowed to do during the Primary Impulse.

Strategic movement is allowed during both impulses which allows units to move along roads at a reduced cost but must not enter enemy Zones of Control (EZOC).

Units may also move from one enemy zones of control to another as long as they pay +2 movement points to leave an EZOC. This means that the EZOC are fluid and the defender may need to deploy a solid line of units as the attacker may infiltrate through any gaps between defending units.

Combat is based on an odds ratio system with certain benefits given to the attacker and defender for terrain, troop quality, air support, naval support, armor, out of supply effects and Brandenbergers effects. Nice chrome, without too many specialized rules for combat. An interesting rule is that defending units have the option of making a “Determined Defense” that allows them to disregard retreats at the risk of possibly losing steps. The chances of success when making a “Determined Defense” are greater based on the type of terrain occupied, troop quality and support from air/naval support. Another interesting option is if there is a A1/D2 combat result the attacker loses 1 step (chosen by the defender) and the defender loses 2 steps (1 step is chosen by the attacker). This enables the attacker to take virtually any location but only after some attrition. This is an example of a well thought out revision to the original rules. 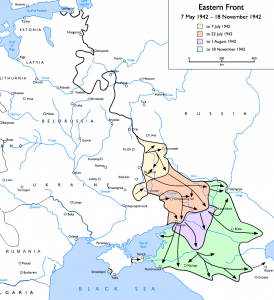 How does The Caucasus Campaign play? The rules are not at all complicated, but do take some time to get used to due to the subtleties noted above. Due to the small number of units on the map, deployment of infantry is important, since they cannot be easily or quickly moved to another location. The Axis only has 3 German mechanized divisions and can go anywhere, but cannot be everywhere. The Soviet can win by delaying and hoping to attrition the German forces and preventing the Germans from attaining their geographical objectives before the end of the game.

The game keep your interest because both players have a number of options available to them. The Caucasus Campaign is highly recommended for those interested in the topic. Make sure you check out the latest edition of the Living Rules for the current changes. There is also a VASSAL module that can be used to play either live or by email. Until next time………..good gaming

Summary of Movement System for The Caucasus Campaign