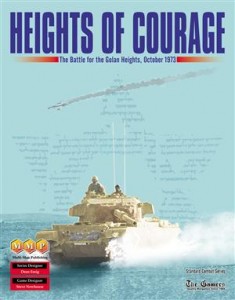 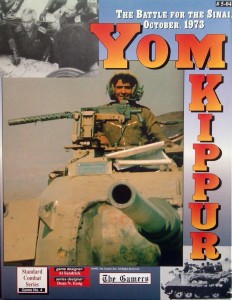 Game Design – Al SandrickGame Development – Dean N. EssigThe Gamers, Inc. – Multi-Man Publishing.These two games – each focusing on one of the fronts of the 1973 Arab -Israeli War – are described by Multi-Man Publishing as “sister games.” If so, Heights of Courage, which shows the battle on the Golan Heights, is the younger sister.Yom Kippur, the battle for the Sinai, has a 1995 copyright, while Heights of Courage was not put out until 2013. Both use the Standard Combat Series rules of MMP, and both have the same basic counter design. 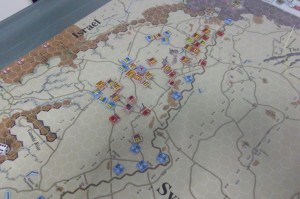 More important, both flip the map so that there is a lot more room for detail, but a lot less space to trade off by retreating units. Its important because you can build up units which are in supply and not in enemy zones of control. But, if they are sister games, one is a blonde and one a brunette. The underlying game mechanics are very much the same, but they play differently enough that its a bit of a challenge to switch from one game to the other. Especially if you play both games at once.Why do that? Because, if you have both games, the rules specifically invite you to. You are asked to play them side by side, and in order to win you must win on both maps.It gives new life to the older game. But if you play both, you will need a really big table.Each game uses a system which brings in combat units over several turns. And, each gives you points that can be used to re-build weakened troops, or even bring counters back from the dead pile. But, Yom Kippur uses a die roll to determine how many armor recovery steps the Israeli player gets, and the number of steps increase as the game goes on. The Egyptian player gets a fixed number of replacement steps at the start of the scenario and never gets any more. Heights has a chart showing available replacement points each turn. 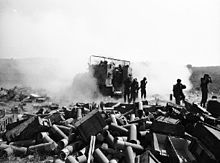 Israeli artillery in the Valley of Tears

The time scale in the two games is also different. Heights of Courage starts with a half day per turn, then goes to a full day, and ends with turns that are two days long.Yom Kippur’s first turn is one day, everything after that is two days per turn. Its scale is two  miles per hex, twice the size of Heights of Courage.Finally, each game raises the possibility that fighting will end because of a cease fire before the last turn is reached. You just roll two six-sided dice, and compare the number with the cease fire number in the turn box. To begin, you need to roll a 12. But, the number drops as the game goes on.  And, if playing both games, you can end up with a cease fire on one front but not the other.Naturally, the numbers you need to roll each turn are different for each game.There is also a slight difference in the combat results table. Supply is uniformly important in each game, since units that are out of supply fight at half strength and artillery which is out of supply can not fire. But, there is a difference with how some Syrian units can draw supply.

Now, none of this will matter to some people. You can play either game perfectly well by itself, and each of the games has scenarios that cover “what if” possibilities as well as the actual battle.Heights of Courage also allows the players to decide, toward the end of the game, if they want to play bravely and attack more often, or play at a more conservative pace and re-build their units.So, you will rarely play the same game twice – certainly not if you are playing both games at once. 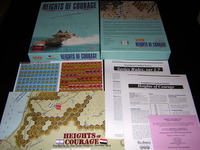 I found the one-sided scenarios were not as much fun as the tight-paced ones, where each player is under time pressure every turn and the inevitable Israeli counter-attack may not come in time, or may not gain as many points as you would like because the game ends early. On the other hand, the Arabs get really thin really quickly, and taking victory points means risking being cut off. Still, getting cut off may not matter as much as you first think.The scoring on the Golan Heights uses the highest total victory point level earned by the Syrians on any single game turn, even if they later get beaten back and destroyed. Which makes the Israeli player race the clock to build up their their victory points before the game ends with a cease fire roll. The victory point hexes they hold at the end of  the game is what counts for them. It gives a whole new meaning to risk and reward in battle.Players never have to attack. But, units which are not in an enemy zone of control get to attack a second time using an overrun in the exploitation phase after combat. That means if you move next to an enemy unit or stack of units – and both sides are the attacker at some point – you have to eliminate them or force a retreat in order to be able to attack a second time.It leads to taking some losses. And a “biggest unit first” rule means your armor will take that loss first. That opens a couple of doors. The first is that you are risking a quick loss of your best units, since your stock of undamaged armor wears away quickly.The second is that infantry will likely never be exploiting, since overrun (the rules are in the general rules book, not the scenario) means first advancing next to the unit you are attacking, and paying for the move. It takes two extra movement points just to get into an enemy zone of control, and at least one point to enter a hex. An infantry unit that has to cross any difficult terrain to reach its target – or go through another enemy zone of control – will never get to exploit that second attack.Armor which does have the movement to attack, and wants to quickly gain territory and open the way for that slower infantry, stands a good chance of running out of supply range. So, when you move, you have to risk advancing your headquarters, being careful not to overstack, just to keep your lead units in supply. And you can’t fire all your artillery unless you are willing to have it stand out of range of the ever-shifting front lines.  It makes for interesting trade-offs every turn.Oddly, some of the games strengths are also weaknesses. Think “I love you, you’re perfect, now change.”The playing pieces look good. They are colorful, the printing is crisp, and they show you the type of unit each represents, either with a military symbol or with a crisp image of a specific tank or airplane. 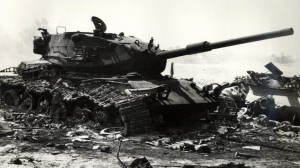 They are also color-coded by nationality and – in Heights of Courage – by unit organization. Supply is important in each game, but in Heights some Syrian units have a stripe showing their division, and they can only be supplied by their divisional headquarters once they cross the anti-tank ditch which forms the starting line. Headquarters units can cross the ditch and still draw supply from roads, but it makes them open to attack. The Israeli player doesn’t need a headquarters unit for supply.Setting up these games can be a slow process of sorting the pieces. There are no generic 4-4 infantry or 12-6 armor. Each unit is identified, and the set-up requires specific units to be put in specific spaces, or to come in as reinforcements on specific turns.  So, you will be spending some time sorting out every cardboard counter, and will need a lot of space to put them down on the table. Both games use the same generic Standard Combat Series rules – eight pages which tell you some very basic things such as how to set up, how to  move and what zones of control can do. It also tells players how they must take step losses, what cumulative effects of modifiers will be allowed and specifies how retreats must be done.Of course, the specific rules for each game touch on some of that as well, and players may find themselves going back and forth between two books of rules, at least until they become second nature. There are some subtle differences on both fronts – Yom Kippur, for example, reminds players they can not attack enemy units in a hex they can not enter. Its important in the swamp near the Suez Canal.You don’t see that reminder in Heights, where infantry units can enter rough terrain hexes but armor can not.Heights of Courage could really use an index like the Table of Contents on the first page of the Yom Kippur rules. Just  try overrunning an enemy unit on the Golan Heights,  only to realize that the rules on how, precisely, to do it and which units can be involved are not in your scenario book but in the other rule book. Somewhere.

I have one personal gripe. While I can see reasons for it, the game rules do not allow players fighting on on the Golan Heights and the Egyptian front to transfer units from one front to the other, or even transfer the rebuilding points you can use to bring back tanks from the dead pile or to re-build them to full strength.  The use of air power is mostly symbolic. Planes just shift the odds table one row, and for SAM interdiction just put an Israeli plane on the interdiction box. The loss of aircraft is simply given in turn by turn allotments, not actual combat.Finally, this is one of those games which use column shifts, not added strength points, to a complex battle. That makes shifting the odds easy in that one critical area, and gives players a good chance to avoid the bloody consequences of an attack, since attackers have a substantial chance of losing a step from their strongest unit even at the highest (6 : 1)  odds attack. Drop some artillery and it becomes 5:1. Use a plane as well and that makes it 4:1.Of course, dice rolling will usually have more of an impact on a fight than the odds shift. But, if we didn’t want to deal with random results, we would all be playing chess.

To sum up, I love the maps, I really like the counters – kudos to the art director – and the rules are simple and easy to follow, even though finding the exact rule you need may be a bit of a problem.The games play fast. and you really don’t know which side is going to win until a cease-fire is declared. Of course, there’s also a rule that allows a player to ignore a cease fire, if they pay  two victory points. Decisions, decisions!