Hermann Luttmann and I ran through a play-test of “At Any Cost: Metz 1870” this afternoon. The Mars-La-Tour scenario is coming along just fine. I’m happy to report the system is running smoothly and the results so far are near the historical outcome, which is always a good sign. We still have to play-test the other scenarios, the overnight turn and the off-board hidden strategic movement system. But that really shouldn’t take very long. If all goes as well as we hope GMT should be publishing “At Any Cost: Metz 1870” sometime after the first of the year. 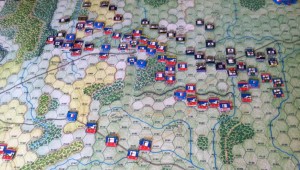 An overview of the situation near Mars La Tour late on the afternoon of August 16th 1870. The French are chiefly in Red and the Prussian forces are in Blue (towards the top of the photo.) The town of Mars-La-Tour is on the right-center of the picture and is occupied by Prussian units. 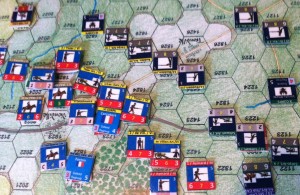 The central front, during the Mars la Tour scenario. Canrobert’s VI Corps actual is contributing to the fight. I decided that his activation really should be a priority for the French, even above getting Marshal Bazaine out of his stupor. With Canrobert plugging the gap there are now two or three French Corps engaging the Prussians. This alone decreases the importance of Marshall Bazaine malazie, as someone is always able to pressure the Prussians. 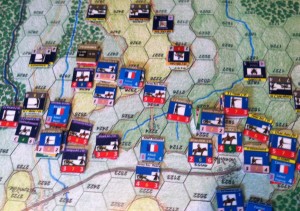 The French left flank late in the afternoon. Fortunately for Napoleon III the Imperial Guard was able to shake off two complete turns of malaise. Therefore the Prussians effort to turn my left with out of command detachments and cut the main road stalled well short of their objectives. 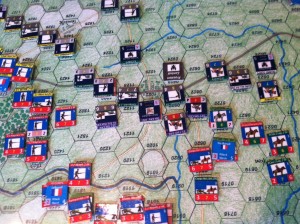 The French are closing in on three sides of Mars La Tour late on the 16th of August. The results so far are just about historical. These components, by the way, are strictly play-test versions. The map above is by Rick Barber, the units are by Hermann Luttmann and GMT has scheduled AAC for publication in the first quarter of 2016. Right now Pascal Da Silva is scheduled to do the final counter artwork and Mark Simonitch will do the GMT map. We are very fortunate. 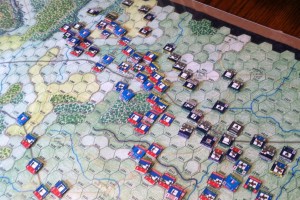 An overall look at the center-left of the French position late on August 16th.

Consimworld Forum page for “At Any Cost: Metz 1870”

Boardgamegeek page for “At Any Cost: Metz 1870”