Impressions after playing the first scenario of “Longstreet Attacks”

Having just completed the first scenario and partway into the second with a friend, I am thoroughly enjoying myself so far. I thought it would be good to write a small review seeing that there isn’t one yet.

The map itself is very impressive, I really enjoyed the hand-drawn art style. It is also presented in a very clear way that makes it easy to look at and assess during play when moving and attacking with units.

I watched the gameplay videos that are posted on youtube before diving in, I think these do a good job of showing how the flow of the game should be. The rules themselves are rather intuitive and nothing felt out of place. I found myself referring back to the book less and less as the scenario went on. The tables provided for combat resolution are very clear, and I thought provided realistic results. It does appear intimidating at first, but really after the first couple combats you will have a good grasp of it and know what to expect. The other player was someone with very limited or essentially no experience playing war games, but they had little to no trouble at all with this. 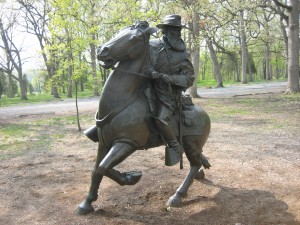 This is the first game I have played using the ‘chit pull’ system, and I do enjoy it so far. It seems to lend itself very well to simulating combat confusion and the difficulties in commanding an army from the time period. I look forward to seeing more of the various commanders. The way orders are handled really has a great feel when you are trying to coordinate your brigades. Again, the references provided clearly explain the different chits and were easy to use.

In our scenario, I led the Confederates while my friend led the Union defense. U.S. Sharpshooters were surprisingly effective and through some lucky rolls dealt out quite a bit of hurt as I advanced Law’s brigade over Big Round Top. Robertson’s brigade came forward through the valley and engaged and routed the weaker regiments of Vincent’s brigade defending Little Round Top. I took heavy losses in the opening of the engagement, and it looked like something I would have trouble coming back from. However, high Confederate morale came into play when initiating close combat which really evened things out as the battle continued. Hazlett’s battery pulled forward to the right of the Union battle line when it arrived, and could’ve been very dangerous but most of his shooting turned out to be ineffective. In the end with both sides only having a few effective regiments left, some desperate Confederate attempts to take Little Round Top on the final turn were turned away by good defensive fire. Both of us were rolling rather high the entire time, which led to some pretty heavy casualties for both sides. I am sure if we played this scenario again the outcome and way the battle played out would be fairly different.

This game pulled me in right away, it really does give off the ‘simulation’ feeling as you play. I haven’t enjoyed a war game this much in a long while, and I think if you are a civil war enthusiast you will really have a lot of fun with this one. Might be an odd comparison but it gives me the same gut feeling as Sid Meier’s Gettysburg did for PC. The ‘chit pull’ system will lend itself rather well to solo play I believe, since you really will just be making the best move available each time with elements of unpredictability sewn in. All in all, 100% worth the investment, I can’t wait to keep playing and I hope other people will dive in and see what this game is all about.

[As seen originally on Boardgamegeek. Used with permission – Fred]