The Irish Brigade at Gettysburg video 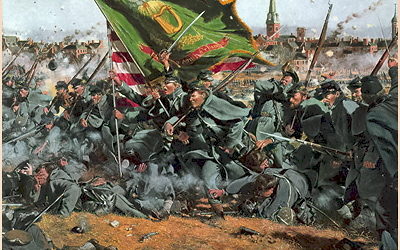 The above painting is “Clear the Way” – by Don Trojoiani.

I prefer to use the Irish Brigade at the Peach Orchard myself. The Wheatfield is close enough to any number of units that it is in less danger of falling than the Peach Orchard, which is where the Union line makes a 90 degree turn and is being attacked by most of the Confederate artillery and a good three brigades. The Irish Brigade’s high morale is key to holding at least some of this vital piece of terrain for as long as possible. It’s only downside is its surprisingly small size.

We’ve been testing “Longstreet Attacks: the Second Day at Gettysburg” for the last few weeks. It’s the third game in Revolution Games American Civil War series. It uses the “Blind Sword” system that has already appeared in “Stonewall’s Sword: The Battle of Cedar Mountain” and “Thunder in the Ozarks: The Battle of Pea Ridge.” “Longstreet Attacks” was formerly known as “Hammerin’ Sickles” when it was on GMT’s P500 list. It should be available to the public sometime around September of this year.