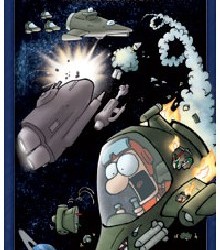 Q: What’s a light year?
A: It’s the same as a regular year, but with fewer calories.

– Anonymous (Did you really expect someone to take credit for this?)

Now that we are all in the right mood, I’d like to discuss one of my favorite Beer-and-Pretzel games: Mag-Blast. Just consider it a fun, light, comic book style, space opera card game that requires a little thought and a lot of luck. In a word it’s “cute.” It was designed by Christian T. Petersen and Anders M. Petersen and published by Fantasy Flight Games in 2006. It is now in its third edition and can be played by 2 to 8 players. But I’d say four players at one time is about right, as with many more the last few players may find themselves eliminated before their turn even comes up.

Mag-Blast’s basic silliness is generated by John Kovalic’s cartoon style artwork and the requirement that a hit only counts if you simultaneously make a silly sound. But as this gets old fast, my group dropped that aspect of the game long ago. (Though I’m sure kids will love it.)

As far as I’m concerned, Mag-Blast is a perfect game for those times when it’s just too early to leave your gaming session or during your lunch break or to introduce your children to a new type of game. Think of it as a charming game that takes 3 minutes to learn and 60 seconds to master. True, it has a rather high randomness factor, but then again the better players usually win, so I don’t think its at an unreasonably high level.

A sample of the various Flagships available to Mag-Blast players. The number in the lower right hand corner is how many damage points the ship can sustain before being completely destroyed. Note the various edges of these flagships are color-coded.switch will match the turret colors on the attacking ships

In fact, its mechanics reminds me a lot of Brawling Battleships – Steel, but its much faster and lighter and – at least in the third edition – much sillier. Although, for example, it doesn’t have the relentlessly daffiness of Munchin. In any event, if its silliness becomes too much for you I’d suggest turning off the sound effects and/or switching to the second edition, as it’s practically the same. (The illustrations in this article are all from the third edition.)

Basically, Mag-Blast has four or five kinds of cards: Alien races, ship types and a few varieties of action cards (hit cards, defensive reaction cards and special event cards) . Players semi-randomly pick an alien race at the start of the game, with each race having a different special ability and being located in a different Flagship. As some of these races are much more powerful than others, which one you end up with is fairly important.

The players then randomly draw four ships to guard their Flagship. These ships are placed in front of and behind, and to the left and right, of their main ship card. These guard ships are known as the yellow, orange, green and blue squadrons from the color of the Flagship card’s edge they defend. As the game goes on players can randomly obtain reinforcements for them from the draw piles. A player loses, and is eliminated from the game, when an opponent manages to destroy one of his guard squadrons and inflict 8 damage points on his Flagship. Though, this is not as tough as you might think as Flagships can’t be repair and are sitting ducks once a guard squadron is eliminated. 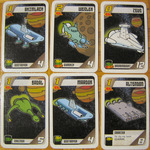 The guard ships in your fleet come with various capabilities, from the weak scouts up through destroyers, gunships, dreadnoughts and carriers, which can launch fighters or bombers (if you have them). Though, most ships only fire cannons from their color-coded turrets.

A few of the various action cards in Mag-Blast. The text explains their effects and the card with a number in the lower right hand corner is the number of damage points this fighter squadron can inflict at one time. Fighters can be stopped by your opponent’s fighter squadron. Plus, the damage they inflict is not permanent unless their target was destroyed during the attack. The symbols that sometimes appear in the cards upper left hand corner are an alternate method of generating reinforcements. Players may discard cards with the same three symbols or cards with three different symbols in order to draw a random ship.

Critical hits involve playing two or three cards combinations in one turn. Something like a “Hit” card, followed by a “Direct Hit” card and ending with some kind of “catastrophe” card, such as “a boarding party captures an enemy ship.”

Mag-Blast is the quintessential beer and pretzels game. With the right group of people a game lasts 45 minutes or so. However, its important that you play with the right group, as the game does tend to break down if everyone uses a turtle strategy. On the other hand , if one or two players strike early that’s usually enough to set off a chain reaction of attacks, counter-attacks and counter-counter attacks that lets the game speed along to a fairly rapid conclusion. If the game is still to slow for you, I’d recommend decreasing the number of players. 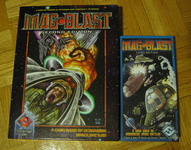 If you want to speed it up even more I’d use the “Brutal Barrage” variant that allows all the turrets in any one ship to fire in one turn. (Normally, one ship fires one turret per turn, but some ships have two or even three turrets. If they all are allowed to fire you have effectively tripled your firepower and cut the playing time by 65 percent.)

So, if you are looking for a quick, light game to play during lunch or with your children or to unwind with friends this is it.