The game set-up from BGGi

At first glance, Mound Builders looks like several other games – more than a dozen put out by Victory Point Games alone –  that use a relatively simple playing system that involves rolling a die and moving a marker up or down a chain of boxes until you win or lose.

Some are more complex than others. The simplest can introduce youngsters to playing more complicated games, while the more elaborate ones will teach seasoned players some things about the battle they are fighting, or the history or events involved.

The easiest ones play like a beer and pretzel game, and the very simplest ones can become cookies and milk. You roll, you move the markers. Almost like Candyland. Which is not all bad, if you are looking to kill some time.

They can get more elaborate, giving you choices on where to move the markers, or where to attack. And, you might get a choice of where to set up, stack to change the odds or get some extra attack markers to push back the enemy.

Lots of battles are fair game for this kind of system, even though it keeps you from using terrain properly or advancing where you want to go, or even making that one last, desperate charge.

You can try to get the British out of Normandy or try as the Israelis to keep various Arab armies out of east Jerusalem after declaring statehood.

Victory Points Games, which puts out Mound Builders, calls them State of Siege games. But, if they are a family of games, Mound Builders is more like a second cousin, once removed, when compared to the basic ones.

He’s the smart cousin who went away to college, and came back full of all sorts of information that he’s just waiting to show off. And, he  might fool you and bring a six-pack of beer when he comes to visit.

At first glance, Mound Builders looks like some other games that use a relatively simple playing system. You pull a card, roll a die and then move markers up or down a chain of boxes until you win or lose.

No figuring where to move across open terrain. No worries about ambushes or running out of supply. No concentrating your troops for a critical attack.

But with this game, what you see isn’t what you get.

Any resemblance to those other games stops with the map, which shows several trails covering much of the land that would eventually become the southeastern United States.

Rolling a die and moving a marker up and down the five tracks in Mound Builders is just a small part of a remarkably elaborate and elegant game. And rolling the die is like opening the door of a car – its just starts a journey.

The game itself gives you lots of hints that this isn’t just a roll and move system. Some of the more obvious ones:

1. The rule book is 30 pages long.
2. There are nine different trade goods to deal with as you build your economy.
3. There are 50 randomly-drawn history cards that drive the action.

If that’s not enough, just read the game’s sub-title: Culture, Trade and Warfare in Ancient North America. The rules even end with a recommended reading list of books on Native American culture.

You are in for an education with Mound Builders, in more ways than one.

This is a game designed by people who clearly love their subject. They’ve based the game on interactions of various Indian nations, cultural shifts that took place for well over a dozen centuries.

But, that observation sounds kind of off-putting. You are playing a special kind of game, but you’re not signing up for a class in cultural anthropology. The background in Mound Builders just kinda sneaks in under the tent.

Here’s what you get. The game plays in waves. The first is a period of happy expansion, as the capital city of Cahokia – its roughly where St. Louis is today – expands its power down to Florida and out to the east coast through trade and assimilation, even when local tribes may not want to be assimilated.

The second wave involves tribes you can’t see that attack and assimilate your allies (or at least trading partners). You face a loss of trade and influence, and the five paths you worked so hard to expand start shrinking. Not quite easy come, easy go, any more.

There are also some subtle dynamics. The peace pipes that served so well to block aggressive actions against you stop working that way. The game designers say you should think of it as a treaty changing into a temporary truce. And, if you don’t back those peace pipes up with an army you lose them.

Then, the third wave comes. The Spanish arrive – you have to draw their card – and you don’t really know where on the map they show up. They bring force, and they bring smallpox. And, new hostile tribes show up and revolts and civil disorder descends on your once-mighty empire.

The game ends after the Spanish arrive, but not immediately.

And, there is also a chance to play an advanced game, which gives new options in your battle against the fates of the dice and the cards. You just have to add some more rules, and some cards can get more powerful. And, finally, the rule book includes some optional rules which can also change the game.

With all the options, you really can avoid ever playing the same Mound Builders game twice.

About the only thing you don’t get in Mound Builders is a traditional victory. Look at the table of contents and you will not even find the term “victory conditions” listed anywhere. 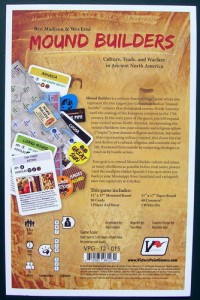 The back sheet from the polybag edition

But those victory conditions are spelled out, right on page 22 of the rules, at the end of the “end of game” chapter. The Spanish marker is moved one last time, the turn ends, and you have won.The rules say so. But, of course, that’s an oversimplification. Like much else in Mound Builders, first impressions can be misleading.

You can’t win the game if you lose Cahokia, but even if you hold it, your victory can turn hollow.

There is a kind of push-pull mechanics in the rules. Do one thing and something else happens. Turn a card and it may be good or bad, or both. The victory conditions are no different.

Going down those little boxes on the trail – and some of them are actually circles with their own special rules – isn’t always simple as just rolling a die.

To do things, you need action points. To get them, you turn over a card, or you may have to rely on your economy, which grows as you expand. And, as you do this, you must reach agreements with native tribes and lay down the peace pipes which will become vital later in the game.

(This is a simplification. You can get a white action point symbol, which gives you the face value of points, or a black symbol, which lets you calculate the action points you generate from the goods in your storage pits. Tribes may move up or down warpaths. Or revolt. You can also build up the palisades protecting Cahokia, or improve your storage pits. But you can’t do it all at once, and there is a limit to the number of cards you can pick)

Then, when all this is done, you can go on to the advanced game. If you get hooked on Mound Builders to this point, it could be an irresistible offer. 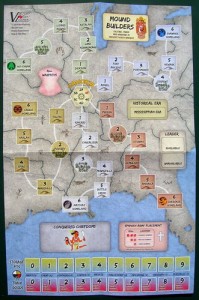 The paper map from the polybag edition.

I did find one thing about Mound Builders misleading. The little graphic on the box says you can play it in 40 minutes. For me, that’s wildly optimistic. I have put this game out on a spare table and played for a half hour, then come back to it two or three times more before finishing. And, I didn’t always win.

It isn’t easy choosing where to go, or what to do. Or always figure out the best way to do it. Or, maybe there’s just too much distracting information on those historic event cards.
Or, history just repeats itself. 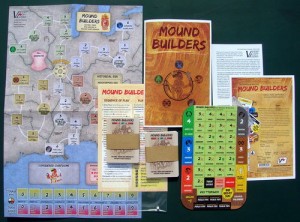 The contents of the polybag edition – BGGi