The National Interest: Don’t Exile Thucydides from the War Colleges

“Last month at War on the Rocks, Marine War College professor Jim Lacey held forth on how to teach Thucydides. Read the whole thing and hurry back! 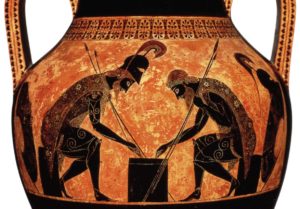 Let’s congratulate Professor Lacey for raising awareness about professional military education and the value of gaming at war colleges. Readers of his missive, however, could be forgiven for coming away with the impression that war colleges not named Marine teach the Peloponnesian War almost wholly through passive methods such as lectures: students come to class, a professor drones on for the allotted time, there’s a perfunctory Q&A, they go away. That’s what Lacey says he did when starting at Quantico a few years ago. Ergo, it must be what other military education institutions do.

Now let us give you a view from Newport, where the picture differs radically from the one Lacey paints….”

Critical Moments – Caesar vs the Mutiny of the Legions