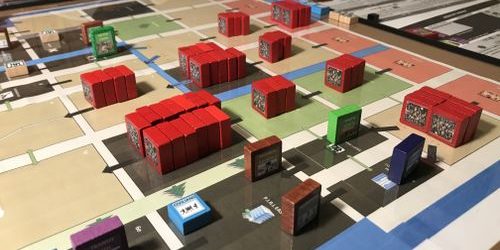 (Quotes and pictures are used with permission.)

(Note: The game mentioned below with the working title of “Beware the Shades” has been re-titled “The Plum Island Horror.” Otherwise, it is the same game. Its design and development are complete, its pre-orders are well above the 500 needed to be published by GMT and it’s now getting ready to enter their Art Department. When it will be published is unknown at this time, but we will keep you informed of any developments. – ED.)

As most people familiar with Hermann Luttmann’s designs know, we usually develop 4 to 8 games at a time. This gives us the freedom to work on what interests us at the moment.

So what interests us now? Well, the two closest games to seeing print are Hermann’s “Beware the Shades” and his “A Most Fearful Sacrifice.” Normally, we do not show pictures of the playtest versions of a game (it only confuses people into thinking the playtest components are the finished product) but Hermann has recently released a couple of pictures of each game for an article in “Diagonal Moves,” so I’ve been given permission to speak more freely about what’s coming up shortly.

According to Hermann, “The two big games I have cooking now are indeed huge. One is a cooperative horror game called Beware The Shades! for GMT Games. It will feature four asymmetric factions which are trying to cooperate with one another as they attempt to stop a monstrous outbreak of Shades, horrific mutated beasts that were once human.” 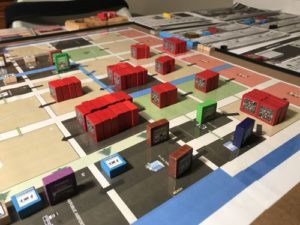 This is a picture of the latest playtest version of the proposed game “Beware the Shades.” (It is not what the final product will look like in all probability. This is just what we are working with now.) The “Shades,” don’t call them Zombies, have escaped from the “Plum Island Research Lab” after a category 5 hurricane hit the island. As the game begins mutants of people who were working at the huge facility broke out from there and are heading for the town of Grenport at its southern shore. The pink areas are where the Shades start off, the tan areas are clear terrain, the dark areas are built-up portions of the island, such as hospitals and Shopping Malls, the green areas are fields or forests. The red blocks are mobs of Shades fighting their way to the ferry landing in Greenport. The rest of the standing blocks are units of the various human factions, while the small, flat blue blocks are civilian refugees. The blue areas are rivers, which may be crossed by bridges if they are in good working order, and the green arrows are hidden pathways only the locals may use. The Shades march down any one of 6 tracks until they hit the end of the island, which contains its most vital areas. Players control any one of 4 island factions, such as the Plum Island Constabulary (the police), Greenport Township (the municipality), Neighborhood Watch (the organized citizens), and the Plum Island Research Lab Security Services. There is a fifth NPC faction that may provide outside help, such as Coast Guard and the National Guard units. There are also random event cards and random victory point projects that can be undertaken at various times throughout the game. Basically, the players earn victory points for rescuing civilians and performing community-wide tasks, such as repairing the Island’s power plant. If the Shades win everyone loses, if the Shades lose the player with the highest VP score wins. Hermann is its designer and I’m its developer. We’ve been working on this game for a good year and a half. 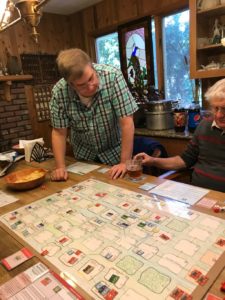 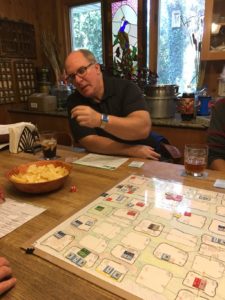 Hermann also mentioned that “The other project, for Flying Pig Games, is the aforementioned A Most Fearful Sacrifice. It will have two huge mounted map boards, over 500 1” counters, activation cards, over a dozen scenarios, etc. That should be on Kickstarter this summer.”

It uses an upgraded version of his “Blind Swords” system, which has been dubbed the “Black Swan” variant. It will cover the entire battle of Gettysburg with counters representing the parts of a brigade as they were used in the battle. For example, if the brigade was never split up in the battle it is represented by one powerful counter, if it split off regiments it might be represented by 2, 3, or even 4 counters in order for players to more fully simulate the actual tactics used at Gettysburg. This game will come with 13 scenarios, most using one map, with their playing times usually running around 2 hours each. The entire battle, however, can still be recreated over a weekend using both maps.

According to Hermann “A Most Fearful Sacrifice“… will be on Kickstarter fairly soon. It will be a glorious production in typical Flying Pig Games fashion. Two mounted maps by Rick Barber, 500+ huge counters, activation cards, etc. Most of the scenarios will be playable on one map but it will include a two-map, three-day Gettysburg Grand Battle scenario that will allow for a number of “what-if” possibilities. I am really optimistic about this one. The best development team in the business is working on it – Claude Whalen, Steve Pointinger, Zeke Conover, and Fred Manzo. And to quote one of the playtesters – “This is not only the best Gettysburg game I ever played, it is the best wargame I ever played”. So the team is loving it and I couldn’t ask for more than that.”

(PS: That last quote wasn’t mine. But I agree it’s a terrific game and I can’t wait for it to reach the public. – Fred)