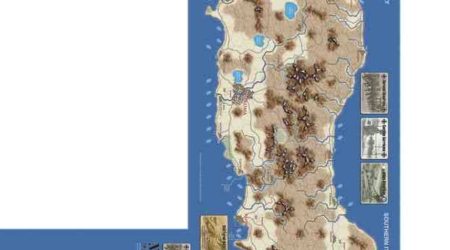 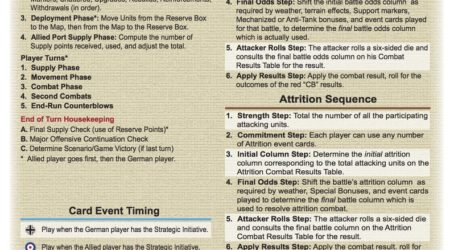 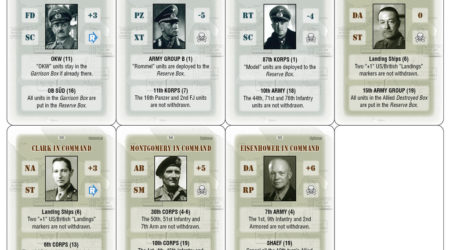 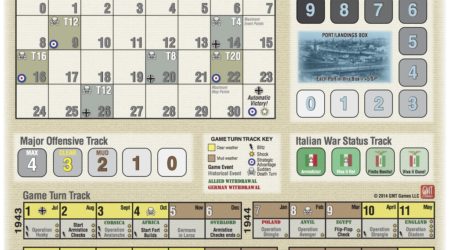 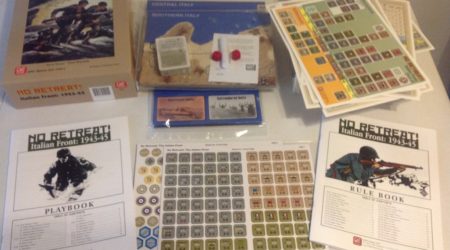 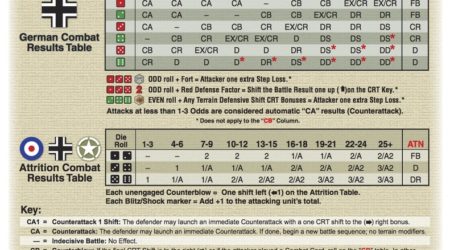 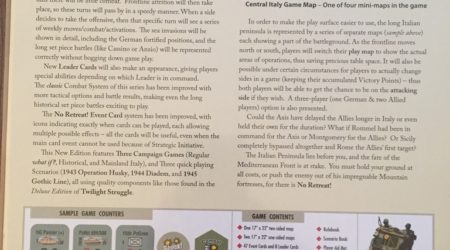 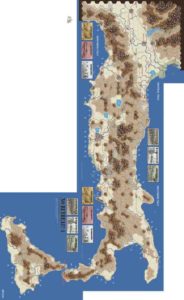 No Retreat – Italian Campaign 1943- 1945 is another great game from GMT designed by the well known game designer Carl Paradis. It covers the Italian campaign where the Allies attempted to attack the soft underbelly of Europe during World War II. There have been a number of games on this subject, but none as well done as this one. This is the fourth in the “No Retreat” series and those gamers familiar with the series will not be disappointed.

This game is a two player medium/high complexity game with three quick playing scenarios (1943 Husky, 1994 Diadem, 1945 Gothic Line) and three longer campaign games (historical, hypothetical and mainland Italy). The scenarios can be played as stand alone games or the Diadem scenario can be used as the starting point for the Campaign game (which allows the Campaign game to be played in a shorter amount of time). The Husky scenario is a great learning scenario. According to the game box, this game can has a solitaire rating of “medium” even though it is a card driven game. I suppose you could play it without the element of the surprise of the cards and that is why the solitaire rating is so high?

The rulebook is professionally laid out. The rules are 40 pages long and are printed in color with a number of gorgeous illustrations and with a good number of examples of play. The Play book is 40 pages as well, with a number of gorgeous illustrations, scenarios, examples of play, designer’s, player’s and historical notes. This is a heavy game and it comes in a very sturdy “detergent style” box with room for at least one counter tray.

The map has four mounted map boards each measuring 17 x 22 inches. and is clear and very pleasing to look at. The maps are packed in the box each individually wrapped to prevent scuffing. Nice attention to detail! The maps are designed to be used one section at the time in order to save space or can, of course, be used together. The map covers from Sicily and the southern part of mainland Italy, all the way to northern Italy. The coastlines of the Adriatic Sea and the Mediterranean Sea are also covered. Each hex is 10 miles from hex side to hex side and each turn represent one month. The campaign game can be up to 22 turns or can end sooner due to sudden death rules. The 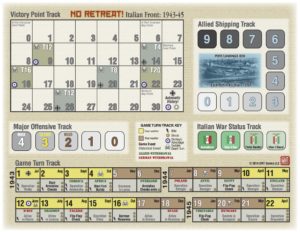 map is very well done. The six Player Aids are separate sheets that cover: terrain/weather, combat charts, tables for reinforcements/withdrawals, turn and victory track records, as well as Allied shipping, major offensive and strategic map information. The six Player Aids charts are in color, very clear and nicely formatted. Most importantly, the battle sequence, attrition sequence, card timing and weekly preparation sequence is clearly spelled out. The map is very pleasing and looks beautiful with the counters on it.

There are eighty eight 3/4 inch unit counters which are very well done with detailed laser printed picture icons and NATO style symbols on the counters that have combat and movement strength factors clearly printed. The units are mostly division size, with some brigades, regiments and detachments. There are an additional eighty eight informational markers and forty seven cards plus eight leader cards. The counters come shrink wrapped in the box but are easily removed from each other, with virtually no dog ears and no need to clip these counters. There is also a very nice color counter manifest in the game. This must be the new professional standard for counters. The counters and map are printed in large font for the tired old eyes of the war gamer out there.

The Abbreviated Sequence of Play for “No Retreat Italian Front” 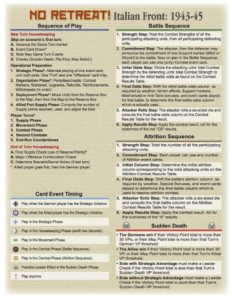 The significant changes and highlights to the game system are as follows: 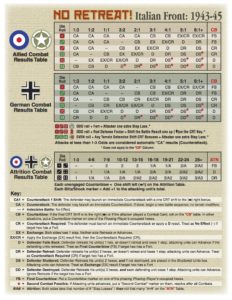 a) The key to all of the games are the interactive nature of the combat results table. Specifically, either side can force a counterattack/counter blow by the opponent’s adjacent units. This can cause adverse effects on the adjacent units. For example, a typical combat would proceed as follows: phasing player declares voluntary combat of adjacent units, non-phasing player declares additional hexes that must be attacked (by using a counter blow marker allowed by the use of a leader or by discarding one card) by the phasing player. The attacker may commit a Blitz/Shock (if available), then the defender. The attacker may commit an available event card, then the defender. Lastly, armor/mechanized units can declare a second attack.

b) Secondly, there are new rules to cover Major Offensives, that allow the continuation of the monthly turn to simulate a continuation of the offensive that can extend for four weeks. As with the entire “No Retreat” game series, the cards can be used for either the event or for operations to activate units to move and have combat. If a player uses the card as an event, it can further enhance a defender’s or attacker’s options.

c) Third, there are Leadership cards, specialized rules covering paratrooper drops, landing zones, fortified lines and attrition combat. The attrition combat allows either side to resolve combat during non-Major Offensive turns. There is lots of “chrome” through the use of specialized units, special events and optional advanced rules.

d) Lastly, what makes the game different from the rest of the “No Retreat” series, is the expanded sequence of play. If a player has the needed card, he can play a “Major Offensive Continuation” which simulates the sustained offensives that were conducted. This option allows multiple move/combat phases. There is also an option to conduct attrition, to resolve the entire front as one battle. This simulates the “grinding” nature of the campaign on both sides’ forces. 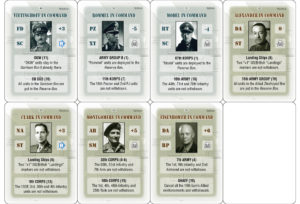 The game keeps your interest and is tense because both players always have a number of options available to them. The game has a bit of a learning curve (as with many of the card driven games) since there are certain “scripted” cards which should be played before another card can be played. This causes the game to be played along historical lines and prevents the game having a non-historical feel. Players will find the mechanics of the game encourage proper strategic and tactical decisions, so players will be rewarded for following along those lines. Cards can be used for the Event, pay for replacements, Counter blows, moving units to the Reserve box or cancelling “No combat” markers.

c) Operational victory – determined at the end of turn 22, the player with the most victory points accumulated wins. 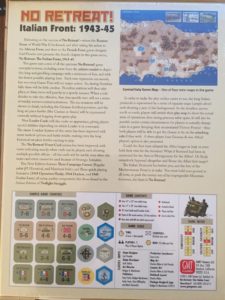 So, how does the game play? Well its pure fun and excitement! Many of the concepts are similar to the “No Retreat” series of games, but there are specific rules that are used to properly recreate the feel of the Italian campaign. The Allies need to maintain a time schedule by capturing victory hexes in order to remain in the game. The Germans need to delay and launch counter attacks when feasible to throw the Allied time table off. Both sides must desperately fight to gain or hold victory objectives and there truly is “no retreat” in this campaign. Its amazing how well the game plays with so few units. There is little to no errata, and there is a VASSAL module that allows play by email. The game was very well thought out. It is a “must have” for the WW II Italian Front aficionado. Perhaps there will be other games using the same/similar system for the Pacific theater of operations? I would highly recommend this game due to its fresh approach to the battle, the replayability and the historical accuracy of the game. Enjoy and good gaming! 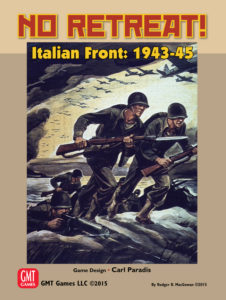